The Quad Cities Chamber, in partnership with the City of Rock Island, today announced that it has been selected to receive a $3 million grant for downtown Rock Island revitalization. As part of the Rebuild Illinois (RBI) Downtowns and Main Streets Capital program, Governor JB Pritzker and the Illinois Department of Commerce and Economic Opportunity (DCEO) awarded $106 million in capital grants to 50 commercial corridors and main streets throughout Illinois, which represents the largest-ever RBI investment focused on community revitalization.

“I am thrilled to announce that we are doubling last year’s investment in our downtowns and Main Streets Capital Grant program to include over 50 communities throughout Illinois to modernize downtowns, address long-awaited infrastructure needs, and boost local economies — in turn, bettering the quality of life for our state’s residents,” said Governor JB Pritzker. “With that upgraded infrastructure comes economic opportunity: more jobs, more business growth, and more money pouring into the communities that need it most — and that’s what Rebuild Illinois is all about.” 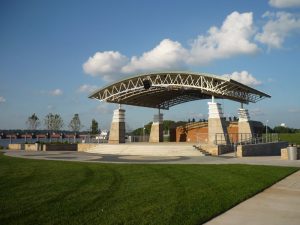 “I am excited the plans to rejuvenate the downtown are getting underway, especially with a total of more than $7 million to be invested,” said Rock Island Mayor Mike Thoms. “We are grateful for the recent $3 million award from the state of Illinois. This is due to the partnership between the Quad Cities Chamber and City of Rock Island. We could not miss this opportunity to use American Rescue Plan Act funds and TIF funds to leverage a state grant that would almost double the investment into our Downtown. We have had a lot of public input on this very well-thought-out plan.”

The proposed $7 million project includes streetscaping and placemaking improvements throughout the core of the downtown Rock Island Historic District, roughly the area between 1st and 4th Avenues and 15th and 21st Streets. The project will renew weathered infrastructure and add decorative lighting, landscaping, signage, security cameras, parklets for outdoor dining, public art installations and pop-up vendor stalls, among other amenities.

While many of these new elements will be introduced throughout the bulk of the Historic District, the primary focus areas are:

The City of Rock Island is supporting the project through $2.5 million in American Rescue Plan Act (ARPA) funds and $1.5 million in Tax Increment Financing (TIF) District funds. Illinois Casualty Company is also contributing a parcel of land and up to $100,00 for the development of the dog park. 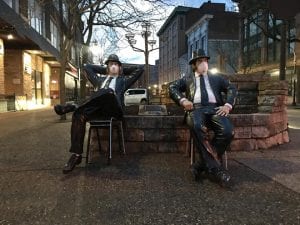 The Blues Brothers are a famous icon in downtown Rock Island.

“Between this award, and the millions of dollars in investments being made to develop the new Federal Building and YWCA, among other projects, downtown Rock Island is on the cusp of an exciting new era of revitalization,” said Jack Cullen, Director, Downtown Rock Island with the Chamber. “Not only will this project help the downtown business community rebound from the pandemic, but we believe it will help create the vibrant sense of place our community is craving to attract more private investment and visitors, too.”

The project scope of work was developed with the support of the Downtown Steering Committee. Arron Sutherland, Committee Chair and President/CEO, Illinois Casualty Company said, “Momentum is building downtown and receiving the final piece of funding for capital improvements is a great start. I think it has been amazing to see the positivity, and overall support that has been shown for the revitalization of downtown Rock Island. We’re grateful to the City of Rock Island and State of Illinois for their partnership.”

The RBI Downtowns and Main Streets Capital Program is designed to support local commercial corridors, with concentrations of businesses that experienced difficulties during the pandemic due to declining foot traffic, tourism and business from downtown offices. The program drives investment in infrastructure and public amenities that continue to fuel economic activity as more Illinoisans visit their local town centers.

In early 2021, Rock Island City Council approved a contract with the Quad Cities Chamber to provide place management services and explore the creation of a place management organization to maintain, program and promote the Downtown above and beyond current levels of service. Jack Cullen, Director, Downtown Rock Island, was hired to lead the effort with the guidance of the Downtown Rock Island Steering Committee made up of business and property owners, City officials and other stakeholders.