Davenport, IA. – The Quad-Cities will have a team of hard-working young men representing the state of Iowa in an upcoming international soccer tournament!

Quad City Strikers U14 boys are the #1 ranked soccer team in their division in Iowa. The team is a positive, ambitious group of great young men who have been working hard to achieve their goals! The team sets a positive example in their schools and community, practices daily, and is dedicated to teamwork, good sportsmanship, and unselfish play. 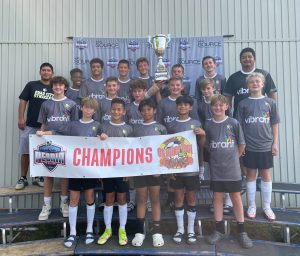 Due to the high costs of the tournament, Quad City Strikers has set up a GoFundMe for the teams and appreciates any and all donations that can be offered. The GoFundMe is at https://www.gofundme.com/f/quad-city-strikers-u14-boys-national-tournaments?fbclid=IwAR3MnVj2CSjtJdy8S0IKElWFqXm08fjCX0kPGB2hhgNKW2eQFmuz-Uur_YI

“We are extremely proud of all of our teams at Quad City Strikers, and are very proud of these boys who have worked hard to rise to this level of competition and compete at an international level,” said Morgan Pullias, club president for Quad City Strikers. “The Quad-Cities is an excellent soccer market that features a lot of talented players and we’re proud to be representing the Quad-Cities, and the state of Iowa, in this prestigious tournament.

“This is just the beginning of a lot of positive developments for the club, as we’re always looking to provide the best experience for all our players and parents,” Pullias said. “Strikers offers awesome coaching and a great soccer experience with the lowest and most affordable fees which is important during these tough financial times.”

Interested in learning more? Check out the club at qcstrikers.org.