Home › Cities › Davenport › There Will Never Be Another Paula Sands

There Will Never Be Another Paula Sands

A local icon celebrated her 40th anniversary this week.

Paula Sands took time out to look back upon four decades at local NBC affiliate KWQC-TV6, a career that’s gone from her being a local-girl-done-good to being a legendary broadcaster, an incredible positive force in our community, and someone who will never be replaced.

Certainly there are well-known media figures and other people of note on the local scene, but I’ve always maintained that there’s really only one local celebrity, and that’s Paula Sands. Some people love her, some people like her, some people take issue with her, but she’s easily the best-known of all TV personalities, and her legacy will be one that will never be replicated.

There will never, ever, be another Paula Sands.

Truth be told, I’m certainly biased in my assessment. I’ve been friends with Paula for over 25 years, and have been a regular on her show, “Paula Sands Live,” for a couple of decades.

We met about a year after I moved to the Quad-Cities from Chicago, to take over as Entertainment Editor at the Dispatch and Rock Island Argus. It was backstage at the old Oil Magazine Music Awards. Paula graciously held out her hand and said to me, “Hello Sean, I’m Paula Sands.” To which I so maturely and elegantly replied, “Duh!”

Louie, it was the beginning of a long-lasting friendship. Thankfully, Paula had a good sense of humor, and always has in regard to my rather sarcastic and mischievous take on life, pop culture, and the world of movies and entertainment. We’ve always gotten along great both on- and off-camera, and I’ve always appreciated being a part of her show. Paula has always been consistent and steadfast, always been a good person, always been cool with me, and my son. She’s always genuinely seemed to be invested in and concerned in the community, and had a passion for presenting the positive side of our community, which is what led us to team up on the long-running What’s The Good News? segment on “PSL.” But it’s not just for show, it’s because, while it sounds cliche it’s true, she does genuinely care and take pride in the Quad-Cities and the good things that happen in our community. 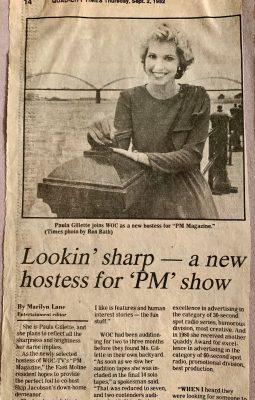 Then-Paula Gillette debuted on then-WOC TV-6’s “PM Magazine.” She would become Paula Sands, the station would become KWQC, and the show would become “Paula Sands Live.” And now you know… THE REST of the story…

It’s that sincerity that shines through not just for Paula, but for all the veterans at channel 6, from Erik Maitland to Theresa Bryant, and beyond. And it’s a big reason why KWQC has been consistently dominant in the ratings basically since the ’70s, back when it was WOC-TV. We’ve gotten to know all of these people, they’ve become a part of our lives, and in doing so, they’ve hearkened back to an era that’s long gone, and of which they, and Paula, are perhaps the last bastions.

It’s no secret that traditional media is on the downward slope. Newspapers are rapidly circling the drain. Terrestrial radio is the same way. When’s the last time you listened to regular radio? Read a print newspaper? Entire generations under the age of 35 or so have never held an actual newspaper or flipped around the radio dial, instead always ingesting their media and music online.

Certainly, there’s still some people watching broadcast TV, but it too is quickly becoming a fading remnant as streaming services, cable, and, yes, the internet and YouTube, are taking over.

As TV stations, owned by gigantic corporations, see their profit margins continue to shrink, they have less money and lesser patience in regard to on-air talent. Young reporters a year or two out of college are churned in and out every couple of years, and few are allowed to gain any traction or recognition. They see a market like the Quad-Cities as little more than a stepping stone, a place to get some experience, before moving on, only to be replaced by yet another green reporter.

Channel 4 has been that way since the ’90s. Channel 8 gamely held fast, but in giving up veterans Jim Mertens and Angie Sharp, they went by the wayside and joined in that revolving door of on-air personalities. 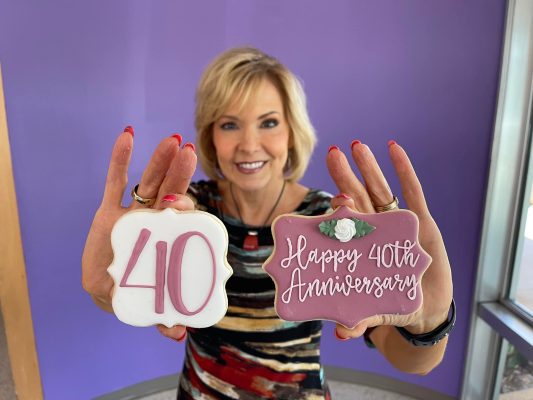 Paula Sands celebrated her 40th anniversary on the air with a sweet treat.

It’s no surprise that ratings dominance has followed their consistency. People who watch TV news like to feel that connection, that relationship, with the people behind the cameras. They’ve always liked to feel like they know them, that they’re a friendly face and persona, that they’re part of their lives, a person they invite in for an hour or so a day to find out about what’s going on. There’s a trust there, a bond, that used to be considered sacrosanct and vital.

It still is at KWQC, and that’s demonstrated in the career of Paula Sands. She’s impossible to replace. Same as Erik Maitland, same as Theresa Bryant, same as Marcia Lense, and KWQC’s other veterans. KWQC’s executives seem like a smart lot, and if they are, they’ll let all of them stick around as long as they want. Because there is NO “next.” There are no other veterans like that coming around. And there isn’t going to be another crop of broadcast journalists who are sticking around for another four decades.

Broadcast TV as it is now will not be around in four decades. Neither will newspapers. Neither will radio. News gathering, and the basic product of journalism, will always have a place. But the means of its distribution will change wildly, and its current means of dissemination will seem as archaic as vinyl records and eight tracks. Sure, there will be hipsters reading small batch newsprint papers, much like there are hipsters still collecting vinyl, but the vast majority of the world will have moved on into the expanding digital frontier.

News will be gathered overnight and shared with you the next day through a robot which sits with you as you have your morning coffee. Maybe it’ll be distributed via holograms. Maybe it’ll follow you in your car of whatever mode of transportation exists as a personal drone or earbud conversationally sharing the latest news.

But it won’t be the same as it is now. And it won’t be delivered the same way. It probably won’t even be delivered by a human, but instead an AI algorithm which speaks through a general human-like voice program like Siri. At some point along the chain there will be humans gathering the news, most likely, but they’ll just be compiling it for the program bots to cherry pick whatever subjects people want to hear about or see. Or, due to algorithmic sophistication, whatever they’re pushed to hear and see based upon their habits.

In a way, it’s sad to contemplate, but change is a constant, and the harbingers of it are pretty easy to see in regard to media.

So, here’s to appreciating her, and her compatriots at KWQC, while we can. For their service to the community. For their professionalism. For being the last of their kind. And to Paula Sands, for truly being one of a kind. It’s not hyperbolic to say, there will never be another like her.