Home › Cities › Rock Island › On National Burger Day, Iowa And Illinois Vegans Have A Beef With Me

On National Burger Day, Iowa And Illinois Vegans Have A Beef With Me

They’re two of the greatest gifts you can give yourself throughout your life.

Think about the things that seemed so important to you as a teenager. The people you wanted to date. The things you wanted to do. The goals you had, the friends you had.

Of all those things, which are still important to you?

Do the same thing for your twenties, or thirties, and every decade beyond depending on how old you are. Hell, if you’re a vampire, go back to the 1800s. If you’re one of the Eternals, ask yourself why you were sitting on your ass when Thanos was killing half the universe. Slackers.

But here’s the thing, if the Eternals can coast on half of life in the universe being wiped out by a purple dude with a golden glove, don’t you think maybe you can let it go when the people in the fast food drive thru don’t get your order exactly right?

One of the things I notice most often nowadays is people flying off the handle and losing their cool over minutiae. Yup, I’m fully aware of the phenomenon of venting and using minute infractions to release anger pent up over something else. That’s what road rage is for, so why don’t you flick your damn turn signal on, grandpa, and the gas pedal is the one on the right! Christ!

But another reason I think people make such a big deal over little things is because it gives them some measure of control. Much like road rage. You can’t release your anger at the appropriate target, so you take it out on something more convenient, like that jerk in front of you who didn’t see the light turn green a second ago. And, since so much of what’s going on in people’s lives nowadays seems to be out of their control, they subconsciously seek out micro-infractions to blow up into full-blown volcanos of anger online.

I had this happen to me this week on social media.

Yeah, I know, people getting mad over nothing on social media? What? Is this a day ending in “y?”

I posted something pretty innocuous, stupid and funny and it turned into a strange mixture of concern, cluelessness and offense taken.

You might be wondering what this horrible thing was.

Well, sit down folks. Pour yourself a brandy. Take a couple deep breaths. Because I’m about to tell you.

I posted… about most people being vegans because they harbor a secret fear of the Hamburglar. 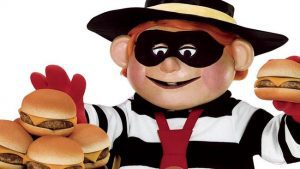 Now, obviously, to anyone who isn’t a freaking total moron, this is a joke. I do not seriously believe people are vegans because they harbor a secret fear of the Hamburglar. I believe they harbor a very open fear of the Burger King, who is much more creepy. I mean, the Hamburglar, I think he’s kind of like a Jean Valjean figure who’s broken out of jail (striped outfit) and is trying to steal burgers for his starving family, and I can support that. He’s a caring individual, his arteries are clogged, and he’s trying to provide for his children who he hasn’t seen in years because he’s been serving time. Let’s have some compassion for him, people.

Burger King on the other hand, who knows what’s going on with that sick bastard.

Best not to pursue that line of inquiry. So, back to what I was saying. I posted a joke about vegans being afraid of the Hamburglar.

And, then, of course, I had people attack me for being insensitive to vegans.

And being insensitive to people who had dietary issues.

And people who had to alter their diet to be more plant-based for health reasons.

And then someone posted a link to the benefits of being a vegan.

And then someone posted a link about me needing to take advantage of my last chance to get an extended car warranty, and that was it, I

Now, I have nothing against vegans. The less bacon they eat, the more for me. I admire the discipline they have to adhere to that diet, and I recognize it’s a very healthy choice in many ways. In fact, I actually eat predominantly a plant-based diet.

Also, as anyone who has read my columns for a while, or knows me in real life knows, I really don’t care what people do with their lives, as long as it doesn’t oppress or harass other people. You can eat nothing but oranges for all I care, if you think that’s going to make you healthiest. You can eat nothing but Takis. Nothing but tofu. You may disturb the Burger King, but I think we’ve established he deserves none of our compassion and quite frankly, a healthy amount of our contempt. 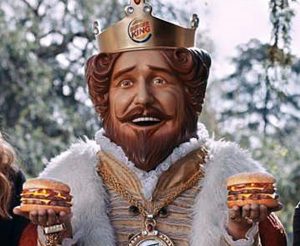 Look at this creepy bastard. Or don’t. Your choice.

But I do have something against people who can’t read context and perspective and can’t take a joke, because they’re freaking annoying.

Not everything is serious in this world. Much is sarcastic and joking. Much shouldn’t be taken seriously. And much we should look at through an eye of absurdist humor because that’s the best view to take upon it.

So when someone posts something that seems patently absurd, that seems like it MIGHT just be a joke, and if you’re a humor-impaired person, ask someone who does have a sense of humor, “Hey, is this one of those joke things I’ve heard so much about?” and see what they say before posting a comment.

Especially if you’re a vegan.

Because if you do it again, I’m sending the Hamburglar after you.