Help Out A Girl Who Makes The Quad Cities More Magical

Nikki Gillette has always struck me as someone puzzlingly uncertain as to just how amazing she is.

Gillette has been a regular on the performing arts scene in the Quad Cities for a while, as a standup comedian, musician, burlesque performer and actress. She teaches art to kids at Blue Grass Elementary, manages the traveling comedy troupe Show Us Your Pokeballs, models, haunts and does makeup at Terror at Skellington Manor, and is involved with other local groups such as Moonshine Misfits Burlesque and Open Source Improv. She’s also a columnist for this website.

She’s smart, funny, beautiful and creative. But sometimes strangely completely seemingly oblivious to all of that. 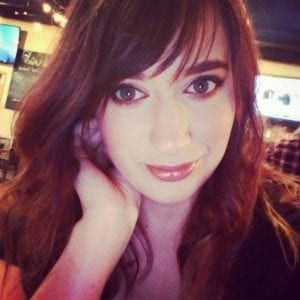 Her comedy, and her social media posts, have often been infused with a self-deprecation that has seemed born of a sincere uncertainty and insecurity. I’ve interviewed Nikki a few times and have worked with her before, directing her in the sketch comedies “Rock City Live” and “Shots 2 The Heart,” back in 2015, and it’s always struck me that that insecurity has definitely been unfounded.

Gillette is an incredibly talented, entertaining and engaging person who is constantly striving to make her life more interesting and magical. She’s one of those local creators I’ve always found charming and fun, one of those people who don’t just talk about all the things they’re going to do, but who puts in the work to make her visions a reality. She’s the kind of person every arts scene needs more of, who makes it more vibrant.

That’s why it was saddening to hear, in late July of this year, that she was diagnosed with stage two breast cancer.

Gillette admits that the experience was more than a little scary and unsettling, but she’s handled it with characteristic humor and strength. She has since undergone a lumpectomy to remove the tumor, and is currently undergoing radiation therapy. She will also be on preventative injections and medications for the next five years.

To help out with the financial burdens, as well as to ameliorate the emotional and physical toll of the arduous path she’s taken, her brother, Sean, and her boyfriend, Bobby, decided to organize a benefit, Fight Like A Magical Girl, taking place from noon to 8 p.m. Saturday at Skellington Manor, 420 18th Street, Rock Island.

Entertainment for the day will consist of stand up comedy, improv, burlesque, and live music. There will also be a silent auction, 50/50 raffle, food, and a cash bar. And of course, there will be plenty of live music and comedy. There is no cover charge for this event, but donations are welcome.

Gillette truly is a magical person, a wonderful creator, and someone who has made the Quad-Cities better and funnier for her presence. If you get the chance, and are looking for some entertainment and fun Saturday, check out the gig, and pitch in to help out a little bit.

It might make you feel a little more magical as well.