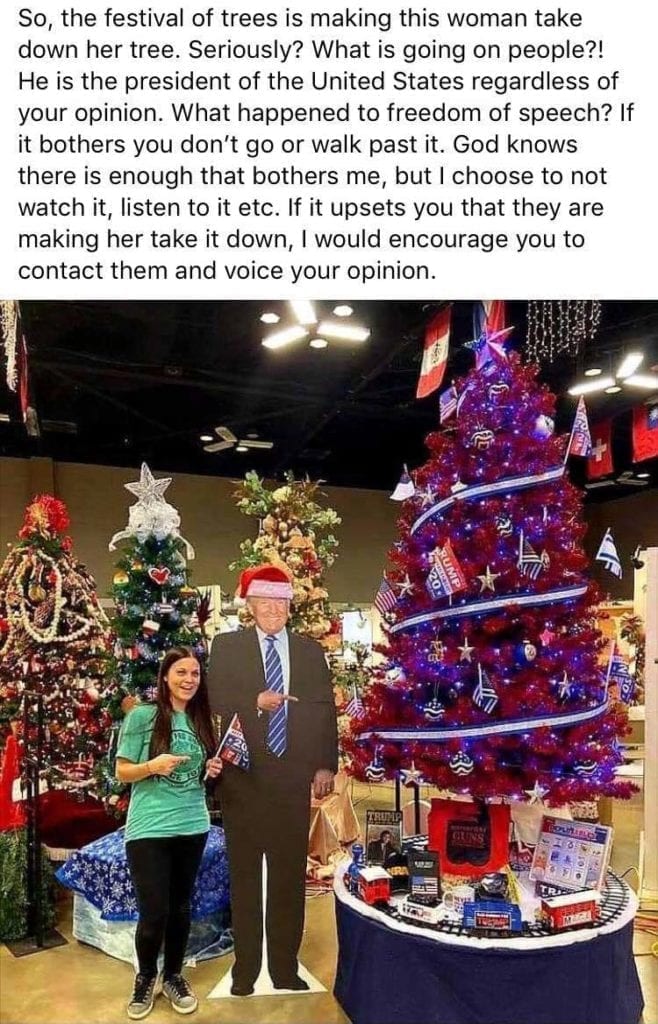 For the past few months, my Iowa friends have been deeply envious of my Illinois address.

Not because of the upcoming legalization of pot, nor because of the lack of flooding, but rather because I don’t have to deal with the constant deluge of politics and politicians dumping on them.

With everything from TV and radio commercials to rallies to appearances to door-to-door visits to telemarketing calls and polls, the good people of Iowa have been hit by an avalanche of politics in advance of the caucus next year. And regardless of anyone’s beliefs or sympathies towards any candidate, all of them I’ve talked to agree that they’re just tired of the sheer magnitude of it at this point.

Add in the impeachment hearings, the regular daily news and impending holidays, which are always fun with the lively debates between relatives, and it’s no wonder that people would welcome an oasis from the political onslaught.

That’s where events like Festival of Trees come in.

The annual holiday event has always been apolitical. While you might see a tree decorated from time to time by someone of a certain political persuasion, they don’t decorate that tree with in-your-face political innuendo or propaganda. The event is all about Christmastime and its various holidays and themes, something that everyone can enjoy, regardless of their beliefs and opinions.

And there’s something refreshing and wonderful about that, especially during times like these.

Which is why the festival was right to take down a tree that had been slated for this year’s fest.

The tree was the opposite of the festival’s usual apolitical stance. It not only featured a large cardboard cutout of Donald Trump next to it, but the tree was festooned with various Trump memorabilia, including Trump 2020 stickers, MAGA merch and more. It was about as subtle as, well, a tree covered with political stickers and signs. From the picture I saw, it looks like there’s even a Russian flag hanging behind it, looming. Hmmm…
The festival officials told the person responsible that they would have to take the tree down, and if they wished, replace it with something less political.

And, of course, as is its wont, the internet went frigging insane.

People started shouting about a ban of the festival, ripping the event for infringing upon free speech (even though the constitution only guarantees the government not infringing upon free speech, not private entities; and a good lawyer would argue that it’s the festival’s right to free speech to allow the event to proceed in its own way, etc., but I digress), and generally pulling a Brick Tamlin yelling “LOUD NOISES!!!” all over Facebook and Twitter.

And, people have a right to that opinion.

Just as I have a right to my opinion that the festival did the right thing.

My opinion is not due to my own political beliefs or my feelings on Donald Trump. If it was a Joe Biden tree with branches that rested upon women’s shoulders and an ornament that produced sniffing sounds and said, “your hair smells terrific, sweetheart,” I would feel the same way.

There are some things that should remain apolitical. There are some events that are best just being for entertainment purposes. The Festival of Trees is one of those.

When faced with this decision, they made the right one in telling the woman to take the tree down. Not because of Trump, but because of precedent, because once you open that door, you can’t close it, and you’ve got to leave it open to all to be fair.

The Festival is not for any one political party or politician. It looks to draw an audience across all political stripes. So, by allowing a Trump tree, to be fair, they would then have to allow trees for any and all candidates. And believe me, every and all candidates coming through Iowa in the future would have a tree. Do you think their campaigns are going to miss the chance to put their message out there in front of a huge event drawing thousands of people in one of the biggest cities in Iowa?

Do you want a Marianne Williamson “Healing Vibes” tree?

Because this is how you get a Marianne Williamson “Healing Vibes” tree.

And a Bernie tree, with a bunch of messy snow on top; and a Warren tree, covered in plans; and a Mayor Pete tree (don’t put it next to the Chick Fil A tree!), and maybe even Hillary and Bill trees.
Watch out, Jeffrey Epstein tree! You’ll get turned into a wreath!

But I don’t keed about how freaking annoying that would be. Imagine that this woman put up the Trump tree LAST year, and they allowed it. Well, this year, the Festival would’ve had another Trump tree… along with about 20 other trees, each dedicated to one of the Democratic candidates coming through the state. (Although, honestly, I’d love a Yang tree that featured ornaments you could select from and get $1,000.) Before you know it, half the damn festival would be packed with a bunch of annoying political propaganda and once again, Iowans, you have a place where you cannot escape politics.

As opposed to the direction Festival of Trees took, when they did the right thing, and said no to all, leaving patrons with a spot they could go to escape politics and just enjoy some light entertainment and holiday cheer.

So, thank you, Festival of Trees, for one of the greatest gifts of all.

Your gift from Illinois will be coming January 1st.