Home › Columns › Sean Leary › Drive To Get Radio Personalities Back Was Worth A Shot, But It’s Not Happening

It was worth a shot.

But you can stop calling and e-mailing the stations.

When it was announced first here on QuadCities.com that a number of on- and off-air personnel were let go from local I Heart Radio stations, including WOC’s Jim Fisher and Dave Levora, Debbie McFadden of Mix 96 and Q106, Todd Alan of KISS-FM and Ron Evans of Mix 96, fans of those shows were understandably upset. 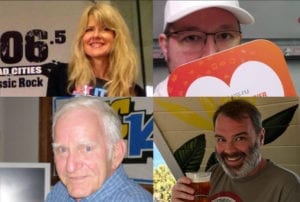 When it was learned that, a day later, two shows and six jobs had been restored to Des Moines sports talk station KXnO, due to, as they put it “overwhelming fan outcry,” there was some hope that an equal reaction would occur due to a parallel action here in the Quads. That led me to write a column leading a drive calling on fans to flood the stations with your pleas to get your favorite folks back.

It was a valiant effort, but it’s not happening.

Your calls and e-mails were overwhelming and certainly noted by management at the local radio stations WOC, Mix 96 and KISS-FM, but, as I kinda figured, the Des Moines re-hires were an anomaly. Some might say the entire “back due to popular demand” schtick was nothing more than public relations, a bit of bullshit thrown out there to placate fans when KXnO had every intention of hiring those folks back to switch over to an FM simulcast of the station. The switch gave them cover to “fire-then-rehire” the teams and maybe score them some positive press along the lines of “WE LISTENED TO YOU, THE FANS! AREN’T WE GREAT??? DON’T WE CARE ABOUT YOU???” Did that happen? Not sure. Could that have happened? Oh, hell yes. C’mon now. That’s a textbook public relations move.

However, local stations weren’t in that same boat. They didn’t have a preordained plot to rehire anyone nor did they have the authority to do so. As I stated in my previous column about Jim Fisher’s firing, this was a corporate decision, made by high level I Heart Radio execs, many miles away, to can hundreds of people nationwide as part of a corporate reorganization. This wasn’t the decision nor the fault of the people in the local offices. They were blindsided by this almost as much as the people let go.

Unfortunately for them, they were also blindsided by your response, and I imagine it was frustrating for them to have to deal with it even though they couldn’t really do anything about it. The decision was made far above the local management level. Would those local managers bring back some of those employees if they could? Most certainly. No doubt Fisher was an incredibly divisive personality, and nearing 80 pushing retirement age, but the rest weren’t. Ok, maybe Levora had a few detractors. Probably the beard. It does look a bit sinister. But all kidding aside, those folks were consummate pros who’d been doing good work in the market for decades.

So, at this point, don’t bother bugging the local stations anymore. They’re not the ones to blame, and in fact, it was probably difficult and not a lot of fun for them to have to let go fellow employees they liked and respected. There’s no point in rubbing it in.

It’s a tough gig working in media, and has been especially so during the last decade. Corporate consolidations have turned the once-thriving media landscape of the ‘90s and early 2000s into one that’s considerably smaller and of a decidedly different stripe. Two decades ago, pretty much every station had a predominantly local on-air staff. Other than overnights and some scattered evening spots, there were actual humans living in our cities behind the microphones. Is there a chance for that to become the norm again? Not likely. But maybe. If the shift to syndicated content doesn’t work out, the pendulum might shift back. The broadcast frequencies aren’t going away, and the stations are going to need content.

Regardless of when or if that happens, I hope that folks like Levora, Evans, McFadden, Alan and others are able to find new jobs. As someone in the media who has likewise been on the corporate chopping block due to “business decisions,” I know what it’s like to be in their shoes. I wish them well.

At the very least, they can take some solace in the fact that their departure was felt. Fans did call and e-mail the stations in droves hoping to get them back.

Like I said, it was an uphill battle from the start, one that didn’t stand much chance of succeeding. But when it comes to trying to do the right thing by people, when it comes to making an effort to try to help good people get their jobs back, it was worth a shot.

I look forward to hearing them again, somewhere on the dial.