Home › Columns › Sean Leary › After Three Years, Covid Finally Caught Me. This Is What It’s Been Like.

After Three Years, Covid Finally Caught Me. This Is What It’s Been Like.

It finally caught up with me, the jerk.

For the last three years, I’ve been dodging covid. I’ve written about it, I’ve known dozens of people who have gotten it, and spent an entire week at home around my son 24/7 while he had it, and throughout it all, I never caught it.

It hit pretty hard and fast, and unexpectedly.

I’m double-vaxxed, although didn’t get boosters, and I’m in pretty good health overall. I don’t have any mitigating factors, no diabetes or anything like that. I also like long walks on the beach, sushi, and good conversations with women looking for a serious relationship. But I digress.

I knew numbers were going back up, and I lead a pretty active social life between work, travel soccer with my son, and various other social activities. I see a lot people, I’m around a lot of people. But that’s nothing new. Nothing different than anything I’ve done the past few years.

But for whatever reason, immune system was stressed, lack of sleep (both reasonable choices) or whatever (I’ve shared too many Epstein didn’t kill himself memes and this is a warning), covid made its way into my life, and it hasn’t been a welcome visitor. 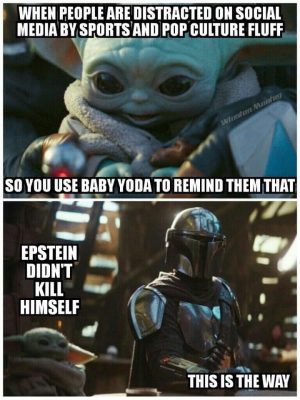 There I go again, on my own…

I first started feeling symptoms Monday, but they were typical allergy symptoms, and I have allergies, so I didn’t think anything of it. Even when I felt exhausted and went to bed around 10 p.m. Monday night, I just figured I was overdue a good night’s sleep.

I was drenched in sweat, my clothes soaked. My teeth were chattering, I was shivering cold, but also felt like I was burning up. And this was beneath two comforters and with the heat on and a furry dog sleeping next to me. I woke up, changed into new clothes, and took my temperature. It was 103.2.

My head was pounding. I was heavily congested, beyond typical allergies. I’d just recently written a story on covid numbers going up. Could I possibly have it, or was this just another case of a bad virus or some other bug?

I had a couple of home tests on hand, took one, and sure enough, two lines. Positive.

I messaged work and said I’d be working from home for likely the rest of the week, in quarantine. I didn’t really know what to expect at that point. Maybe a day or two and then I’d be fine? How many days did I need to quarantine now, five? I wasn’t really sure how it was going to go, I just knew at that point, I felt horrible. But that was also the beginning. Covid numbers have been going back up in and around the Quad-Cities over the past month.

And what it was was a beginning of a lot of repetition, because through the day and night Tuesday and into Wednesday, pretty much all I did was sleep, waking up every 4-5 hours to change into another outfit because I’d sweated through the previous one, and to take more NyQuil or DayQuil depending on whether the sun was out. But regardless of whether the sun was out or not, I was sleeping. I managed to struggle to stay awake for a few hours to get some work done, but otherwise I was knocked out.

Finally, Wednesday afternoon, after sleeping and feverishly sweating through the day again, with a horrible headache, I called my doctor and asked for some meds. I’d heard there were some effective drugs in treating covid so I figured I’d get some. My doc put me on Paxlovid.

By that point, I was in full flush of all the symptoms. I had had a fever of over 102 for two days. I was constantly sleeping and exhausted. I had a horrible headache, congestion, cough, and sore throat. My body ached, and when I coughed or sneezed, it felt like I had broken ribs. My eyes burned and my sight was sensitive. I couldn’t keep any food down, and I had periodic throbbing headaches which would crescendo in a migraine-like pain then subside. Worst of all, I began to start thinking that I liked Nickelback. That was the worst.

Ok, maybe not. Even repeated plays of “Rockstar” would’ve been better than what I was feeling.

Anyway, so I went to my neighborhood drug dealer, Walgreens, and got my Paxlovid, which sounded like an alien race from Dr. Who.

I took my first dose Wednesday night. Within a few hours, I noticed I had more energy, and seemed almost wired like after a few espresso shots. That enabled me to stay up and get some work done, but then I crashed again. One good thing was that the meds helped ameliorate  the fever and sweats. I still had a fever, but it went down into the 100s, and I was still sweating and had the chills, but it was better than before, and by middle-of-the-day Thursday, after having taken a second dose, the sweating and chills were thankfully gone, and my fever was around 100.

As of this writing, around 10:30 p.m. Thursday night, I just took my third dose of Paxlovid. I’m still feeling like crap in general but better than before. Fever is down from 102-103 into the low 100s/high 99s. Don’t have teeth-chattering chills, not sweating through my outfits every four hours. Eating some food. Not sleeping constantly. However, still feeling exhausted, headache, really bad congestion, body aches, foggy headed at times, just feel beat up. Strange waves of swelling painful headaches that ebb and wane. Medicine is kicking in because I’ve got that metallic taste in my mouth that’s a side effect.

So, here we roll into Friday. I just keep drinking lots of liquids, resting and taking DayQuil to help with symptoms to kick this thing’s butt and move forward, because that’s really all I can do.

That, and keep watching this guy…