The Quad City River Bandits have definitely hit a home run with the folks at Baseball Digest magazine — they’ve been named minor league Team of the Year by the sports mag.

River Bandits owner Dave Heller was given the award Tuesday night at a ceremony prior to the team’s home opener against the Cedar Rapids Kernels at Davenport’s Modern Woodmen Park. Baseball Digest’s Kevin Reichardt presented Heller the award, and the owner of the Kansas City minor league affiliate was understandably chuffed to receive it.

“We are so honored to receive Ballpark Digest’s 2021 Team of the Year Award,” the team said in a statement. “We’d like to extend a huge thank you to Publisher, Kevin Reichard for surprising us last night and presenting Dave Heller with some hardware!” 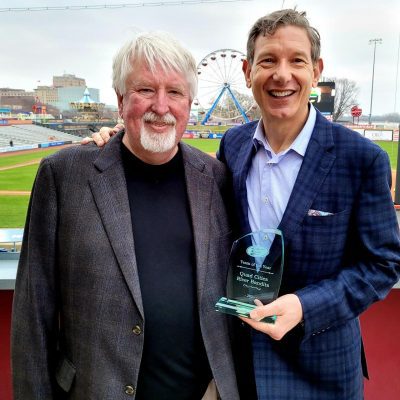 In their first year as the High-A affiliate of the Kansas City Royals, the Bandits finished in the top half of the league in attendance and topped their 2019 total despite ten fewer home dates and beginning the season observing local and MLB Covid-related protocols. In addition to the jump in attendance, the Bandits also set a new record in merchandise sales, offering new items with a royal blue and gold variation of their iconic primary logo and a new Iowa/Illinois alternate logo that celebrates the area’s multi-state fanbase.

At the start of the season, Quad Cities unveiled upgrades to its in-game video production system that allowed both fans in attendance at Modern Woodmen Park and those watching at home to experience the highest quality production in team history. For the first time, guests at River Bandits’ home games were treated to high-definition video and live in-game scoring graphics on Modern Woodmen Park’s state-of-the-art 42’ x 36’ video board and its new 7’ x 82’ ribbon board, each of which display 4K content. The team also enhanced the sound system throughout the ballpark and improved upon their fan experience with a new point of sale system at both concession stands and the team store, while also adding an ISM Connect double-sided kiosk to the amusement deck in left field.

Beyond the improvements made for 2021, the team also secured its long-term future. Working with the City of Davenport, the team and the municipality agreed to fund roughly $2.5 million in ballpark improvements for the 2022 season including home and visitors’ clubhouse expansions, dressing areas with private baths for both home and visitors female coaches, a flood wall extension, a new weight room and workout room, a new female umpires’ room, a video classroom, nutritionist’s office, trainer’s room and office, new batting cages, improved ballfield security, facia replacement, and a new heating and cool system for the ballpark suites.

“This is a great team award,” said River Bandits owner Dave Heller. “From our general manager Joe Kubly and assistant general managers Paul Kleinhans-Schulz, Josh Michalsen, Seth Reeve and everyone else, our staff did a great job both working with the Kansas City Royals and taking care of our fans. The City of Davenport really stepped up and helped us complete the new renovations required by MLB, and the Royals organization is as good as they come – they were a huge help. This award really reflects all the efforts of so many people, so we’re really very grateful.”

“It really is special because this is the industry’s publications gold standard,” Heller said. “This is the website (Baseball Digest) everybody in our industry reads and to be honored by your peers, to be honored by the people who know us best — that really means a lot, thank you.”

Heller was quick to mention his excitement about the upcoming season as well as his team’s various promotions and amenities added to the ballpark in a recent renovation.

“We’ve got t-shirt giveaways every Tuesday, free Ferris wheel rides every Wednesday, free pint glasses every Thursday, free fireworks every Friday and free gifts every Saturday — including bobbleheads,” Heller said, adding, “The facilities for the players are now state of the art — the best in the whole organization will tell you. The city has been a great partner working with us and things like that help us become ‘Team of the Year.'”

For more information on the Bandits and to get tickets, click HERE.