This year marks the 75th anniversary of the end of World War II, as Japan unconditionally surrendered to the Allies on Aug. 14, 1945.

To commemorate the end of the global conflict (which killed 416,800 U.S. military), the German American Heritage Center in Davenport has a new exhibit – “Valor & Victory Gardens: WWII in the Hawkeye State.” It explores how the war impacted Iowa.

With this exhibit, the museum remembers and commemorates the period through local headlines, personal letters, and historic artifacts. World War II cost the lives of 5,633 Iowa soldiers, as well as 18,601 from Illinois. The exhibit reflects the German prisoner-of-war camps that were established in Clarinda and Algona, Iowa.

The Tri-Cities, as our area was known, saw many community members determined to defend their country and their state. The Wednesday following the December 1941 attack on Pearl Harbor, Company A, 6th Illinois Infantry was called to guard the Centennial and Government Bridges, for fear of sabotage, according to the exhibit. 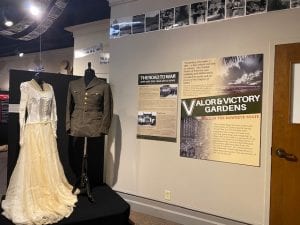 Over the course of the war, 24,000 local men and women served in uniform; over 400 lost their lives. When her husband, Donald, left for his service, Jane Lundeen gave him a rabbit’s foot for luck, the exhibit says. He kept this lucky rabbit’s foot with him throughout the war and today his grandson still carries it. Elna Arp, who had no brothers, decided to enlist in the Coast Guard to represent her family and do her part.

High school student bodies quickly depleted as many young people signed up for the war. Henry Langrehr of Clinton was just 19 when he parachuted out of a plane over Normandy. He survived the battle, but was taken prisoner by the Germans and was imprisoned behind enemy lines at a work camp and at Auschwitz concentration camp. It was almost a year before he escaped and returned home. Across the country, families who had loved ones serving in the military hung blue stars in their windows. If their family member lost their life, the blue star would be replaced with a gold star.

In November 1942, the world changed for one Iowan family when the USS Juneau sank. Thomas and Alleta Sullivan of Waterloo, Iowa were proud of their five sons serving together aboard the USS Juneau. George, Francis, Joseph, Madison, and Albert Sullivan enlisted in the US Navy on Jan. 3, 1942. 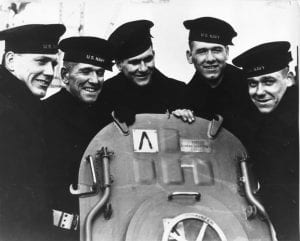 Despite the Navy’s policy of separating siblings, the five Sullivan brothers insisted they serve together. Of the five brothers, only George and Frank had prior military experience. The five were serving together on the Juneau when, in the early hours of Nov. 13, 1942, their ship was struck by a Japanese torpedo. It was struck again while withdrawing to an Allied base with other ships that survived battle. After this second impact, the ship exploded and quickly sank.

Eight days after the Juneau sank, only 10 survivors were found. These men confirmed that all five Sullivan brothers aboard the Juneau perished. Frank, Joe, and Matt Sullivan died instantly. Al drowned the next day. George survived four or five days before going under. The brothers were remembered as heroes, both nationally and here in Iowa. A museum in Waterloo is named for them in honor of their amazing 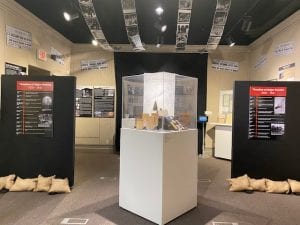 In April 1942, a headline in the Davenport Democrat encouraged citizens to plant “victory gardens” to combat food shortage, the GAHC exhibit says. It even included a guide to help citizens plan their gardens.

Iowa gardeners tended their victory gardens with enthusiasm and pride. Iowa State College produced “Better Iowa Victory Gardens” columns in newspapers across the state that offered tips, tricks, and advice to the small town gardener. Gardening during wartime was not only an economic and nutritious necessity, it also provided some much needed relief from the anxieties of war.

This exhibit is supported by the Jewish Federation of the Quad Cities and was co-curated by GAHC staff and Arthur Pitz, Ph.D. It will be on display through Jan. 17, 2021 and is included with general admission: $5 for adults, $4 for seniors, $3 for children and free for members. 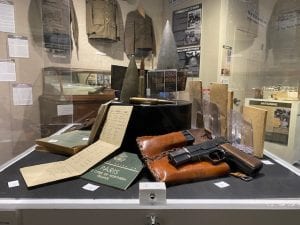 Events will include a cocktail hour and a silent auction including handmade prizes donated by local businesses. An exquisite German dinner will be served, with entertainment by Jacob Bancks and “Lincoln on Immigration & America’s Place in the World” portrayed by Kevin Wood as Abraham Lincoln.

All proceeds from the Fall Frolic benefit GAHC educational programs and exhibits. 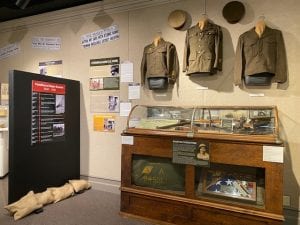 If you can’t attend in person, you can try one of these virtual options –

For more information on current exhibitions and connected programming, call 563-322-8844, or visit gahc.org.