I’m sure by now you’ve all heard about the Travis Scott Astroworld tragedy in which eight young people, one as young as 14, were killed, and hundreds of people, some as young as 10, were injured, at Scott’s Astroworld Music Festival in Houston on Nov. 5.

Concertgoers raged towards the stage during Scott’s set, exhorted by Scott, which isn’t unusual for a performer to do. However perhaps not especially wise given that more and more details are coming out about security people and festival organizers warning Scott against it. Lawsuits will undoubtedly be abundant, and have already started. Investigations by the police are underway. And of course there have been myriad stories about what happened, some especially wild and elaborate.

There’s a conspiracy theory going around on social media now that the horrible event was not only planned, but was all part of an elaborate

satanic plot by Scott to hold a “live blood sacrifice” towards “satanic and Illuminati gods” as part of a secret ritual to gain him more fame and power.

According to these theories, Scott set up the show so that there would be too many people attending and then he exhorted the crowd to act wildly and push against each other with such ferocity that hundreds of people were injured and eight were killed. According to the theories, he did so, and did so in the desert, to unleash an ancient desert demon to give him power.

To prove these theories, they point out a variety of satanic and Illuminati symbolism in Scott’s show, his stage setup and his album and merch artwork. They point to flaming birds, demonic faces, all-seeing eyes, Illuminati symbols and the fact that the stage was set up as an upside down cross and its backdrop was meant to look like the gates of hell, or CERN, depending on what posts you see, with some of the posts saying that CERN itself is the gates of hell.

There are conflicting videos, some of which show Scott standing idly by as things were going nuts in the crowd, others which show him telling security to help people out. Both sides are using these videos to prove their point, that he either was or wasn’t conducting a satanic sacrificial ritual. There are literally hundreds, probably thousands, of videos and posts out there about the subject.

However, like most conspiracy theories, these elaborate plotlines overlook that, as usual, it was one thing that led to such a tragedy. 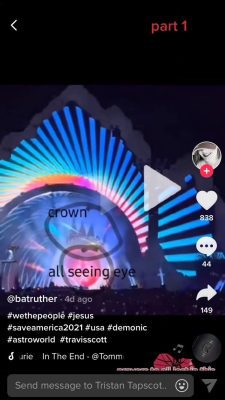 One of many TikTok videos pointing out Illuminati symbolism at the Scott concert.

One could argue it was satanic and evil, certainly, but in a far more banal way than some elaborate Illuminati ritual.

It was just plain greed and stupidity.

And that’s something to remember when it comes to most conspiracy theories and things of this nature.

Everything comes down to greed and money, folks.
TRAVIS SCOTT OVERSOLD HIS CONCERT BECAUSE HE WAS CONDUCTING A BLOOD SACRIFICE FOR AN ILLUMINATI RITUAL!!!!
No. Travis Scott oversold his show because he’s greedy and wanted to get as much money as possible by selling tickets. Allegedly, festival organizers and officials told him beforehand not to allow that many people into that space, but he did it anyway. Not because he was conducting a satanic ritual, but because he was conducting an all-too-common capitalistic ritual.
And that can be said about so many other conspiracies around today. 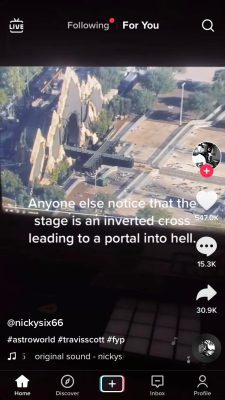 Someone pointing out that Scott’s stage was shaped like an inverted cross leading to a hellish mountain portal.

The covid vaccine conspiracies, for example.

IF, and this is an IF, there IS a conspiracy in regard to the covid vaccine, I’ll bet there’s a 99.9999 percent chance that THIS is the conspiracy:
It’s all a plot to make more money.
Release a virus to create a panic so that you can make money selling the cure.
All about greed.
Now, I’m not saying that’s the case or that I believe that conspiracy.
Re-read that last sentence if you need to.
Again, if needed.
Ok. What I AM saying is that IF there IS a conspiracy, that’s probably it. It’s probably nothing more fantastic than a banal scheme to make money.

Create a virus, release it, create panic, have the cure in waiting so you can sell it to our government and 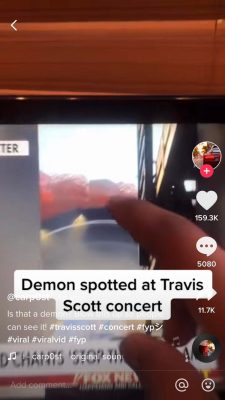 Yup, someone pointing out that a demon was spotted at the concert. Ignoring that it was a hologram that was part of the show. So, they’re actually partially accurate, but it was a fake demon.

others, so you can fatten your bottom lines and jerk off your shareholders.

That’s usually where all “conspiracies” lie — on the financial bottom line.
If someone had actually said that, if people had actually floated that conspiracy theory, honestly, I would respected their logical thinking and cynicism a lot more. But nope. We live in a world where people make up and believe outlandish bullshit, like Bill Gates putting a microchip in the vaccine, or 5G towers causing it, or George Soros using it to control the world population.
These people don’t care about controlling you. They already control you through the media they own, the phones you are enslaved to, and the algorithms you’re brainwashed by on social media.
They don’t care about you at all.
They just care about money.
They care about power created by having more money. 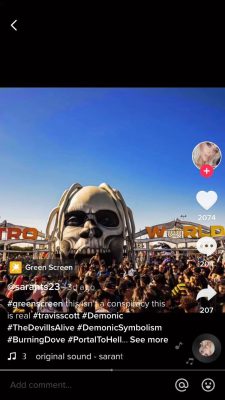 The entrance to the performance area, which many, many folks on social media are using as evidence to the “satanic ritual” theory.

avoid embarrassing things like spending an entire day in the rain at Dealey Plaza waiting for JFK Jr to show up.

The same thing goes for this Travis Scott tragedy.
I don’t think Scott is a satanist or an Illuminati cultist. I think he uses that imagery the same way rock stars have been using that imagery for decades, to shock certain people and entice and amuse others. It’s all for show. I think it’s crazy to question Scott and call him out for being a satanist or holding some sort of blood ritual, and in its own way, it disrespects the memory of the people who died and those injured by turning their tragedy into a buffoonish circus.
But what is reasonable is to question Scott about the security precautions and the number of tickets sold prior to the show, and the meetings had discussing those scenarios prior to the show. What is reasonable is to question whether the greed of having that many people packed into that much space was too much and should’ve and could’ve been addressed beforehand to prevent this tragedy. Ignoring that advice, covering up any meetings about that subject, would be evil enough without any flaming birds and symbols on the stage.
The conspiracies out there are fantastic and elaborate, ornate stories of diabolical imagination. All conspiracy theories are in their own way. But when it comes down to it, most conspiracies, most things that are hidden, are hidden for one reason and one reason alone: To cover up excessive greed and the terrible actions taken towards that greed.
Do I think Travis Scott’s concert was a satanic and Illuminati ritual? No, I do not.
I think it was something far worse. Just plain human greed and stupidity. And that’s what needs to be dealt with.