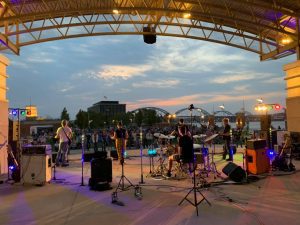 The Rock Academy band Daze Off performed at the September 2020 “Rock the River” at Schwiebert Park, Rock Island.

The bands (totaling more than 35 teenage students) are Been There Done That, Strictly Business, Crushed Monkey, Made Ya Look, Daze Off, Tell Tale Heart and Nonetheless, plus an “All-Star Jam” to end the night, comprised of a half-dozen members of different bands playing together.

There will be a few opening acts starting at 5 p.m. — Mike Diehl with Hallie Shemek, Grace Bryant and Makayla & Aleigha Navin.

This event is free and family-friendly, with plenty of room for social distancing and patrons should bring lawn chairs. Concessions will be available thanks to Rock Island Parks and Recreation — grilling up burgers, brats and dogs — Happy Joe’s Pizza, as well as Bent River 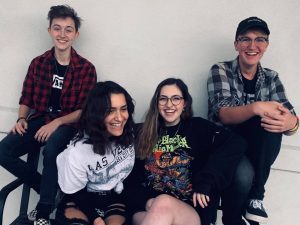 This is the first QC Rock Academy show of 2021, after having just one in 2020 – also at Schwiebert Park, in September — called “Rock The River” and it was a huge success, QCRA director Greg Hipskind said recently. He’s a drum instructor and drummer for the Q-C rock band Wicked Liz & the Bellyswirls.

There were six bands that played for QCRA last year, and Saturday has most of the same bands, plus a new all-girl group, Nonetheless. This is expected to be an annual event, to kick off the summer, Hipskind said. The QCRA has had a Battle of the Bands for seven years each December, except for this past year.

The academy will mark its 10th anniversary at the end of 2021, Hipskind said, with a big bash for Battle of the Bands. The program – at 901 E. Kimberly Road, Davenport — serves about 325 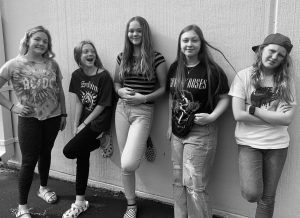 students altogether, compared to 75 kids in the first year, he said. “It’s grown quite a bit.”

Since the pandemic, “we pivoted pretty quickly to online lessons, but we did lose almost 20 percent of our students when that happened,” Hipskind said Wednesday. “We are past our pre-Covid numbers now.”

The bands came back together in person since last July, and lessons have been offered on Zoom. Last November, they took off about three or four weeks of group classes in person.

Grant Beck, 16, is a student at AlWood High School (Woodhull, Ill.), and plays guitar and bass in Strictly Business, forming in February 2019 with other QCRA students.

Grant has been seriously playing guitar two years and bass for six years. “I used to prefer bass, but I now I play guitar more than I play bass,” he said. The band is alternative rock and Grant’s writing style is influenced by ‘90s rock like Pavement and Dinosaur Junior.

He’s been writing songs about three years, which he calls “hardcore punk.” The band does about half originals and half covers. Grant usually 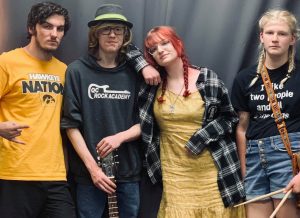 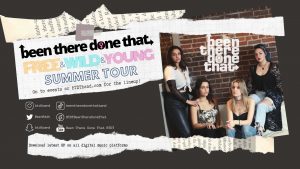 The five-year band Been There Done That has a busy summer planned, including the Pride festival June 4 at Moline’s Bass Street Landing and the Bass Street summer concert series July 29.

“I’ve learned how to play guitar better just by showing up here and doing this every week,” he said of QCRA lessons. “It’s taught me to improvise a lot more. When I started here, I really didn’t know how to play electric guitar very well. I started learning guitar more as I was going here for the band program.”

Last year at Schwiebert Park was a lot of fun, Grant said.

“It was Finn and Hazel’s first show with us, and it turned out pretty well, I think,” he said. Before that, the band had played about a half-dozen shows, and Grant said his favorite was at Davenport’s Village Theatre. They’ve also played at Rascals in Moline twice.

His songwriting is influenced now by underground indie bands. “They have a really good sense of like Pixies, quiet-loud dynamics and contrast. I like the fast lead guitar parts.”

Grant said performing original material “really makes me proud of what I wrote, playing songs that I’ve written live, and seeing how people 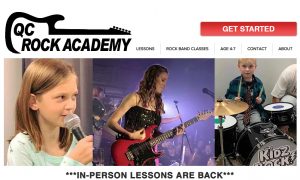 The five-year band Been There Done That has a busy summer planned, including the Pride festival June 4 at Moline’s Bass Street Landing and the Bass Street summer concert series July 29.

react to them,” he said. “By the crowd’s reaction, I can tell if we need to do something different.”

“Grant’s kind of a natural when it comes to writing stuff. I don’t have to push him to do anything,” Hipskind said. “He comes in pretty much every week, look at this thing I got.”

Students in the QCRA bands all get along pretty well and there’s friendly competition among them, he said.

“There’s no calling names, I don’t think,” Grant said. For Saturday, he’s also singing for the band Daze Off, since their singer couldn’t do it. “It’s pretty fun.”

Mia Morris of LeClaire is 14, and attends an online school in Florida. She got her first guitar two years ago and wanted to join a band. Mia joined an existing group (Nonetheless) and plays both acoustic and electric guitar.

“I was very nervous in the beginning, but now everybody’s really friendly with each other,” she said. “They have good energy.”

Their band is still trying to figure out their sound, but Mia said they focus on pop songs. They haven’t written their own stuff yet. Her favorite song now is “You Were Meant for Me” by Jewel.

“I like the energy and having the group just to be together, to have fun,” she said of the band.

“I think we’re excited, but also nervous with first-show jitters,” Mia said of Saturday’s event. They plan to play “1985” by Bowling for Soup.

Hipskind gave a big thanks to Dan Gleason from Rock Island Parks and Recreation for “helping us make this happen and allowing us to hold it at such a great venue.” 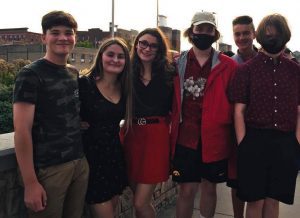 The band Made Ya Look

“This is our first time doing an all-star jam at one of our shows. We are mixing up the bands to play some of your favorite rock songs,” Hipskind said. “They will be classic rock covers. It should be a blast. We did one rehearsal, and it was like, you have to come in knowing your part.”

That will end the night Saturday. “It could be a train wreck; it could be awesome. I have no idea,” he said. “I think it’s fun for the kids to intermingle and play with kids they don’t usually get to play with.”

“If you’ve ever wondered what QC Rock Academy is all about, this is a perfect time to check it out,” he said. “The weather should be amazing this weekend so bring a lawn chair and enjoy the music.”

Been There Done That has been together five years, the longest of any QCRA band. Two of those members are graduating high school and 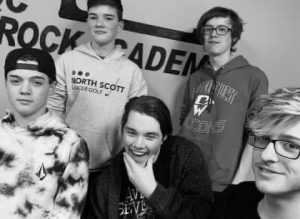 On Labor Day weekend of 2018, the band played at RIBCO in Rock Island for the 97X 40th-anniversary party, after getting the most votes for their song on a new 97X vinyl album. They left at 11 p.m., and hit the road by 4 a.m. Saturday for a five-hour-plus drive to northwest Iowa to compete in the Iowa Rocks Talent show, sponsored by the Iowa Rock ‘n’ Roll Music Association, in Arnolds Park on Lake Okoboji.

They beat out six other bands with members age 21 and under, and performed the next day 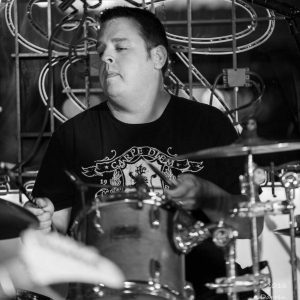 before 2,000 people in the Iowa Rock ‘n’ Roll Hall of Fame induction ceremony.

For winning, they got to record at the state-of-the-art Catamount Studio in Cedar Falls. 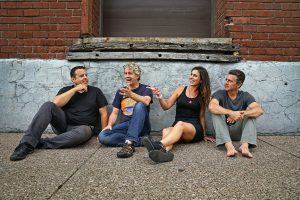 Wicked Liz & the Bellyswirls is back together performing after a year and a half, on Friday night, May 28 at the Dubuque Marina.

Hazel of Been There Done That plays drums for Strictly Business as well. A handful of other students play in more than one band.

Hipskind (Hazel’s drum teacher) plays drums for Wicked Liz & the Bellyswirls, which is getting back together to play for the first time since January 2020 on Friday, May 28, at Dubuque Marina, from 8 p.m. to midnight. They will be performing at the downtown LeClaire Food Truck Fight on June 18, from 5 p.m. to 9 p.m.