Circa ‘21’s latest show, “Disaster!,” is far from a disaster, as its name would imply. It’s controlled chaos, a rampaging beast of strangeness and
random oddity packed with laughs and inspired goofiness.

“Disaster!” is a truly unusual show in that it parodies a film subgenre from almost 50 years ago. Back in the ‘70s, there were an
array of “disaster films,” big-budget blockbusters featuring ensemble casts, usually of b-list and c-list stars, who all ended up in some
awful situation – a plane going down, a ship sinking, a building being exploded by a terrorist, horrible farting in an elevator, etc. It was always a race against time, and a crapshoot to see who was going to survive and who was going to die, although you could typically predict the death toll by the characters and level of stardom of the actors.

Maybe it was the tension, maybe it was the inherent over-the-top cheesiness of the ‘70s as a decade, but for a good few years these films were box office gold, so much so that they even inspired an array of parodies, the most inspired of which, “Airplane,” became a classic and vaulted Leslie Nielsen to late-in-life superstardom. 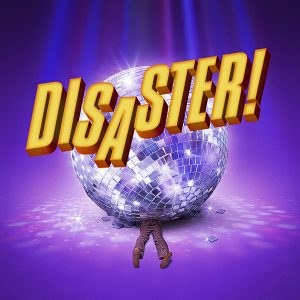 “A Disaster” follows the same path as “Airplane,” albeit with more tongue-in-cheek and less tongue sticking out. We open the show with
the plot conceit – we’re about to embark upon a cruise, albeit on a ship that’s seen better days, run by a sleazy shyster, Tony (Tristan Tapscott) who’s doing his best to slime past a safety inspector, Marianne (Michaela C. Moore). It’s pretty obvious foreshadowing, but in a funny way, and Tapscott hams it up so blatantly that it’s fun to watch.

So, we know what’s going to happen, now we need to meet the poor souls it’s going to happen to, and of course we get a sappy array of
characters crafted to elicit sympathy from us as the ship careens towards its doom. All of them echo tropes from the disaster films of the ‘70s. There’s Chad (Bobby Becher) and Marianne, the star-crossed lovers sailing towards a reunion; Ted (Thomas J. Besler), the good-hearted nerd who knows just enough about science and related matters to get through a variety of plot twists to help save various cast members; Maury (Brad Hauskins) and Shirley (Shelley Walljasper), the elderly couple sailing on their “retirement cruise”; Jackie (Savannah Bay Strandin), and her twin kids Ben and Lisa (Jack Carslake), the soul singer looking for stardom and love; Sr. Mary (Erica Lee Bigelow), the holy woman battling her wicked past; Levora (Kira Rangel) the disco diva, and more.

All the cast hams it up to varying degrees, taking big swipes at the broad humor, and it leads to a lot of big laughs. This isn’t an effete British bedroom comedy, it’s a big, bawdy mess of silliness, and the actors seem to be having fun with the broad strokes. 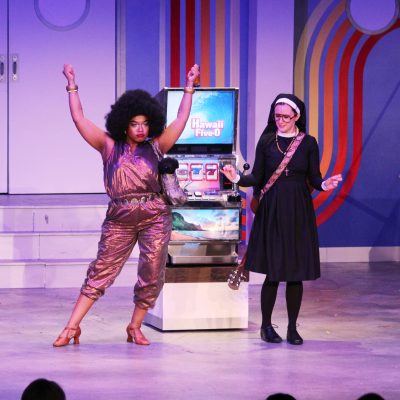 As with every show, it’s not the destination, it’s the journey that makes the show, and this journey is about poking fun at the maudlin
elements of the plot and the cliché aspects of the characters and their interactions.

The success or failure of a show like this is greatly dependent upon the cast, and their comedic chops in milking laughs from the lunatic plot points along the way. This is the most important element of the show, along with the direction of said cast, and Circa has done well on both counts.

Director Amy McCleary encourages the playful atmosphere and craziness of the script, and the performers respond with the right notes ranging from ironic deadpan to over-the-top strangeness.

Of particular note is the dual performance of Jack Carslake, who gets some of the biggest laughs of the show with the utterly moronic low budget staging of his “twin characters,” as well as his overly dramatic takes on their sometimes tragic moments. 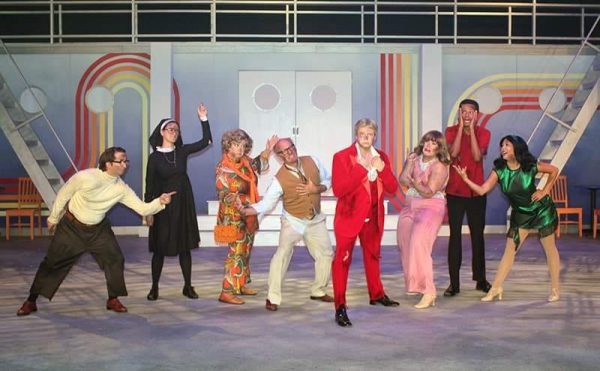 “A Disaster” doesn’t have the name recognition of a lot of shows, it’s fairly new to the area, but if you’re looking for a wild, slapstick,
goofy comedy it’s very much worth your time. The night I saw the show, the audience and I thoroughly enjoyed it, and I highly recommend giving it a try. Far from a “Disaster,” it’s a good time.

Advertisement
Tagged: Circa '21disaster!review of circa '21's disaster!rock island theatre