Late Saturday night the south side wall of Blue Cat Brewing Co. was vandalized with graffiti. Unfortunately, the public cameras in The District courtyard could not identify the culprit. But the Blue Cat owners are determined to turn this negative into a positive. After Blue Cat co-owner Charlie Cole made a facebook post about the vandalism, local artist Atlanta Fulscher reached out and offered to cover the graffiti with her own artwork. She will be onsite around 10 am on Thursday 12/23 adding a big blue catfish to the side of the building.

Other local artists have also reached out offering their services and talents as well. Charlie and the Blue Cat team are now in touch with Quad City Arts and working on a way to showcase several artists on what was once a blank wall. 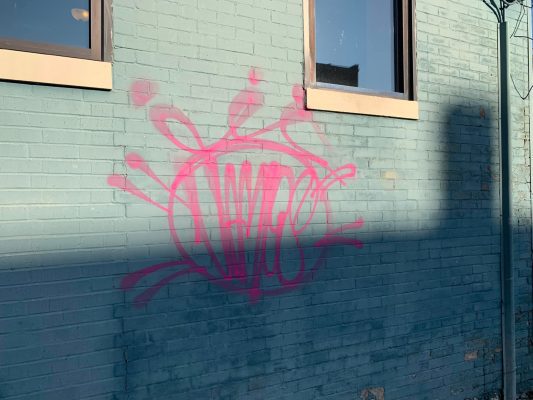 “I have no problem with street art, I’m just not very happy about people doing it without asking. I’m not sure what the symbol means so I really don’t want it displayed in case it represents anything negative.” Cole said. “It really shows how much the downtown community cares about the businesses here though. We’ve been contacted by so many artists and organizations wanting to help add art to the wall. I’m happy this situation is turning into such a positive one.”

Sean Leary
Sean Leary is an author, director, artist, musician, producer and entrepreneur who has been writing professionally since debuting at age 11 in the pages of the Comics Buyers Guide. An honors graduate of the University of Southern California masters program, he has written over 50 books including the best-sellers The Arimathean, Every Number is Lucky to Someone and We Are All Characters.
See More Articles From Sean Leary
Advertisement
Tagged: atlanta fulscherBlue Catblue cat turning graffiti into street artcharlie coledowntown Rock IslandRock Island