The Quad Cities River Bandits have their Opening Day on Tuesday, May 11, and individual tickets for the 2021 season will go on sale Friday, April 30th at 10 a.m.

during normal business hours. All fans holding 2020 tickets and/or vouchers may exchange them for any 2021 game (based on availability) or new set of vouchers at the River Bandits box office.

Modern Woodmen Park will host the highest level of professional baseball yet seen in the Quad-Cities, as the River Bandits have a new Major League affiliate team, the Kansas City Royals. Opening Day is May 11th at 6:30 p.m. against the Cedar Rapids Kernels; the season concludes on Sunday, Sept. 19 against the South Bend Cubs.

The 2021 season has a packed promotional schedule, featuring 13 fireworks shows, 9 bobblehead giveaways, over 30 giveaway dates total and plenty of family-friendly entertainment all season long. The full promotional schedule will be released later this week.

Fans coming to Modern Woodmen Park should know of couple of changes due to Covid that will be in place for this season only. The stadium will be at normal capacity and seating will employ social distancing. All fans must wear masks or 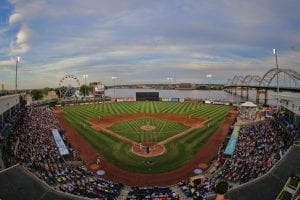 “Unfortunately, per MLB restrictions, we are not permitted to sell seats in the first few rows,” a Monday release from the River Bandits said. “In order to accommodate for social distancing, some ticket plan holders’ seats may be moved for this season, but they can return to their original seat for the 2022 season.”

Gates will open for each game 45 minutes before the first pitch.

Modern Woodmen Park will also become a primarily cash-free facility. Whether purchasing parking, tickets, concessions items, or amusement rides, they encourage use of credit and debit cards as a means to reduce inter-personal contact. Also, per MLB policy, the River Bandits will only allow medical bags and manufactured diaper bags that accompany infants and children into the ballpark.

In 2015, 2017 and again in 2019, the River Bandits earned Ballpark Digest’s award for “Best Charitable Works” in Minor League Baseball, the only club to win that coveted award three times. For more information, visit www.riverbandits.com.