The Rock Island Speakeasy’s latest incarnation of “Rocky Horror” to slink out of the lascivious basement of ill repute is an absolute must-see, a tongue in cheek, tongues in cheeks, ribald riot. Driven in particular by the wonderfully smarmy performance of narrator Doug “Dougie” Kutzli, the 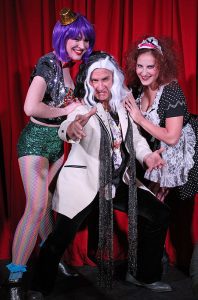 powerful and sexy belt of Kira Rangel as Janet, and the marvelously campy Anthony Hendricks as Frank N Furter, it’s an absolute blast, one of the most fun and funny “Rocky’s” I’ve ever seen — and I’ve seen quite a few.

I’ve probably checked out over a dozen productions of “Rocky” over the years, and they’ve all had their sloppy, messy, raucous charms — and really, that’s what you want from them. You don’t want a prim and proper “Rocky,” you want it to be teetering on the precipice of an X-rated shit show, to feed the energy and lust of the crowd. The Speakeasy’s latest incarnation gives you a knowing wink right from the start that they’re definitely in on that expectation, that wink delivered expertly by the wonderfully slimy Kutzli, who slicks about the stage like a perverted Gildersleeve, his mustache as oily as his one-liners.

Once considered risque, verboten and too risky to produce in Quad-Cities theater circles just a couple decades 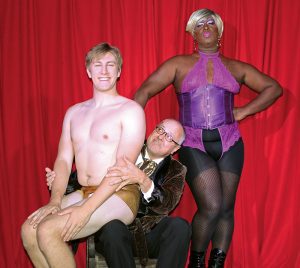 ago, “Rocky Horror” has become an annual tradition that’s been selling out venues consistently over the past decade. It’s no surprise, given how fun the experience is. And yes, it is an experience. It’s unlike any other live theater show you’re going to see — unless, of course, someone decides to mount a production of “Pink Flamingos” at some point.

You either get it or you don’t. “Rocky Horror” is just one of those shows. And if you get it, man, you’re gonna want to get your tickets fast to this latest escapade, because you’re going to absolutely LOVE it.

For those who perhaps haven’t seen “Rocky,” describing it really doesn’t do it justice, but it’s my job to try, so, strap in for the ride. Before I tell this mean ocean though, you need to remember it’s a totally immersive show, a symbiotic creation between the audience and the performers. You’ve got to feel it, you’ve got to be there for it. It’s less about you passively taking in a story which is goofy at best, and more about everything that goofiness manifests within the venue that engulfs you.

Once at the mansion, they encounter the vampy, dark Magenta (Kirsten Sindelar), her suspicious, scheming brother Riff Raff (Brad Hauskins), and their 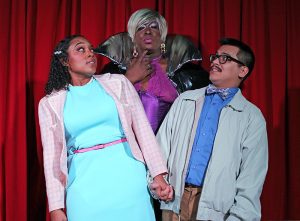 Along the way, a zombie biker guy, Eddie (Nick Munson) enters the picture, as does a buff, pretty boy “frankenstein monster” (Will Crouch, who looks remarkably like a much more muscular version of Cameron from “Ferris Bueller’s Day Off”), and a German scientist/UFO investigator in a wheelchair (again played by Munson). There’s something going on about Frank N Furter creating the Buff Monster as a husband, him killing Eddie who was his ex, him breaking Columbia’s heart, two of the characters wanting to return to their home planet on “Transexual Transylvania,” a secret government investigation subplot, and a whole bunch of other crazy stuff that’s just basically 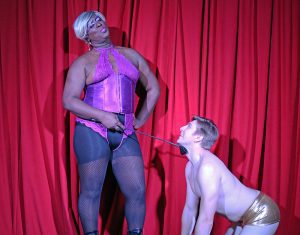 an overarching parody and lampoon of the repression of ’50s pop culture, wrapped up in a bunch of sex jokes, randy scenes, and kinky subject matter.

Oh, and there are a bunch of ’50s rockabilly and musical style numbers sprinkled throughout to ostensibly explain what’s going on, but are largely just excuses for high energy dance numbers and lurid, hilarious choreography.

I don’t know how else to describe it. I mean, really, it all sounds crazy, because IT IS. Again, this is not “Chinatown,” or “Inception,” it’s not about the plot, it’s about the fun, the experience, the arch goofiness and risque camp of it. Like I said, you’re either gonna get it, or you’re not. But if you haven’t seen it, you should, because it’s a one-of-a-kind experience.

Now, for those of you who AREN’T “Rocky” virgins, the question you’re probably asking at this point is, “Will you please pass the Doritos?”

Yes. Yes I will. Here they are.

And your next question is probably, “When the hell are you finally going to get to the point, Sean? Is it good or not?”

Good question. I like where your head’s at. Here’s your answer: “Now, you impatient bastards!” 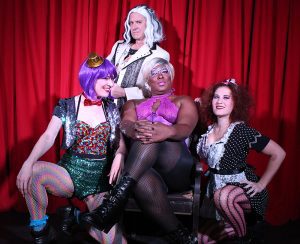 Your follow-up question? “Well, how good is it?”

One of the things that stands out about this version of “Rocky” is the quality of musicianship among the singers. In most of the “Rocky” versions I’ve seen, the music has been secondary, to be honest, and sometimes as singers, the actors have been really good actors. They’ve gotten through the musical numbers by limiting the range of the songs and delivering them with such gusto it didn’t really matter.

Not this time. These singers can BELT.

Rangel is absolutely amazing — a wonderful singer with terrific range. Hauskins really hits all the notes, however difficult, with Riff Raff, and pulls them off with panache. Munson is likewise an incredibly talented vocalist, and Hendricks belts out Frank’s numbers with charisma and power.

In terms of capturing their characters, each actor is marvelously cast. Director Tristan “Not Dougie” Tapscott has done a superb job of lining up talent for this show and utilizing it to its maximum.

Hendricks is an imposing and impressive Frank N Furter, perfectly capturing his arch cheekiness. Rangel sweetly balances innocence and sexiness as Janet. Bernas is hilariously uptight and upright as Brad. Sindelar is slinky and spiky as the darkly comic Magenta. Hauskins’ Riff Raff seems constantly exasperated and hearkens back to the creepy vibes of the film version. Martin’s Columbia has a manic pixie charm reminiscent of Teri Garr. Munson is fantastic as both Eddie and the craven Professor. Crouch does some wonderful and underrated physical comedy as the doofy Rocky. And Kutzli sticks it all together with his pervy, hilarious take on the narrator.

Tapscott’s staging, as always, is inventive and fun, utilizing the venue in creative ways. And although there were a couple of moments I thought needed a little more “oomph,” like Frank’s entrance (which should be far more magisterial and BIG) and the “Time Warp,” which is such a HUGE ENERGY number that it felt too 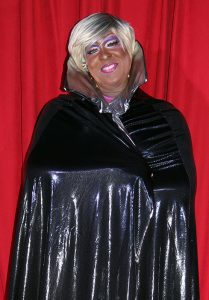 confined on the stage, I always love the interesting and unorthodox ways he presents material.

There’s such a thrill and an electricity to knowing that you are going on a journey with everyone else in the theater that will only be embarked upon once in your entire lives. No matter how many times the show is staged, it will only be staged like that, with those nuances and decisions and actions, that ONE particular time.

With a show as anarchic as “Rocky,” that can go in so many different directions, that can veer off the path and crash so many times before crazily ripping its way back on the road with a hearty roar and a lusty shout, there’s an incredible thrill. You are going to see something nuts at every show, you are going to see something new and inventive and funny and unique and insane and priceless.

But that’s just me. And maybe that’s you. And if it is, boy do I have the show for you. “Rocky Horror.” GO SEE IT.

Here are your showtimes and all that stuff (don’t say I never did anything for you, and while you’re at it, gimme those Doritos back…):

Sean Leary
Sean Leary is an author, director, artist, musician, producer and entrepreneur who has been writing professionally since debuting at age 11 in the pages of the Comics Buyers Guide. An honors graduate of the University of Southern California masters program, he has written over 50 books including the best-sellers The Arimathean, Every Number is Lucky to Someone and We Are All Characters.
See More Articles From Sean Leary
Advertisement
Tagged: anthony hendricksBrad HauskinsBrett HitchcockCirca '21Doug KutzliKiera Lynn MartinKirsten Sindelarmicah bernasnick munsonRocky HorrorRocky Horror Picture ShowSpeakeasyTristan Tapscottwill crouch