Anyone can be an artist, and while the fourth-annual Chalk Art Fest won’t be able to gather in person this year, Quad City Arts is committed to bringing this colorful street art event to the community. So it will take place virtually from Aug. 15 to 28 and anyone and everyone is invited to participate. 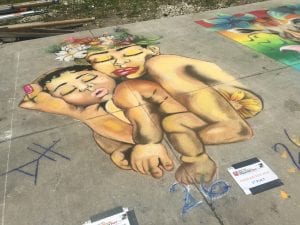 Chalk artists can create their work safely at home, on their driveway, sidewalk, porch or balcony.

Snap a photo of your masterpiece and send to Quad City Arts (via website or e-mail) by Aug. 28 at 3 p.m., and be eligible for over $1,500 in cash prizes, including a youth category (for ages 12-17) award and people’s choice award. There are no limitations to your work, and it can be in any size or shape and created with any type of chalk.

hashtag #chalkartfestqc and #quadcityarts will have the photos and videos of their installations shared throughout the weekend, as well as be entered to win one of several $25 gift cards to downtown Bettendorf retail and restaurant businesses.

“Chalk Art Fest was part of Bettendorf’s Be Downtown event and part of that goal was to highlight the businesses that are operating in downtown Bettendorf,” said Quad City Arts’ executive director, Kevin Maynard. “Since the event was cancelled, we wanted to still highlight those businesses. At this time, we do not have an exact number of gift cards.” 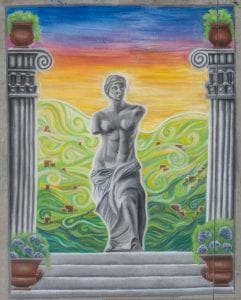 Since they can’t host the in-person event, Quad City Arts is partnering with the Downtown Bettendorf Organization to give away gift cards to these businesses as a way to continue supporting them, Quad City Arts marketing director Karie Gilson said.

It was part of “Be Downtown,” – a celebration of art, music and community – a free, family-friendly event that featured live outdoor music, craft beer tastings, food vendors, a K&K Family Fun Zone with bounce houses, a dunk-tank and other fun activities. (Remember fun activities?) 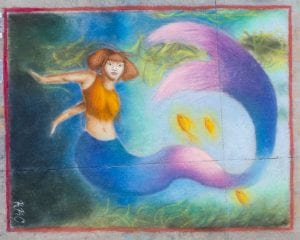 Third place in 2019 was done by Katherine Cornwell, Bettendorf.

Be Downtown, which had planned to be part of the regional Alternating Currents festival (Aug. 27-30), was also canceled recently due to Covid-19 concerns.

The prizes for the festival are:

Complimentary 48-count boxes of pastel chalk will be available at Quad City Arts’ Rock Island Gallery (1715 2nd Ave.) during normal business hours until supplies run out. Entrance is via arts alley on side of the building and masks are required.

The fest is sponsored by the city of Bettendorf, Morency Family Foundation, and Blick Art Materials. For more information, visit quadcityarts.com/chalk-art-fest.html.

Jonathan Turner
Jonathan Turner has been covering the Quad-Cities arts scene for 25 years, first as a reporter with the Dispatch and Rock Island Argus, and then as a reporter with the Quad City Times. Jonathan is also an accomplished actor and musician who has been seen frequently on local theater stages, including the Bucktown Revue and Black Box Theatre.
See More Articles From Jonathan Turner
Advertisement
Tagged: alex dessertchalk artdeasia hickmanemily menkekatherine cornwelllocal artlocal art gallerieslocal artistsnam brennanQuad City Artsquad-cities art galleriesQuad-Cities artistsrebecca quick