Music certainly has the power to comfort and unify people, as exemplified in a new video by Rock Island native Lissie Maurus, who encouraged her fans to submit short videos from their recent life in quarantine. 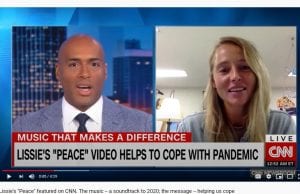 The “Peace” video was recently featured on CNN International.

The five-minute compilation – set to her soulful 2018 song “Peace” – was released Aug. 11, and Lissie did a CNN International interview on the project from her family’s Rock Island home on Aug. 15.

“Needless to say, these have been very disorienting, painful, reflective times,” the 37-year-old singer/songwriter posted on Facebook on Aug. 12. “I tear up with every view! And as the uncertainty continues, my loving thoughts are with you all! It’s been such a testament to the resilience of the human spirit to witness your submissions, both playful & harrowing! I’ll always cherish this collection of our shared experience as we look forward to brighter days.”

“Peace” – which is painfully relevant today — includes the lyrics:

“I just wanna feel peace, please
Throw back the curtain, make me feel certain
And free, released
Take ‘way my burden, make me stop hurting me.” 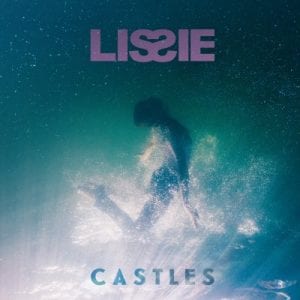 Lissie (who lives in northeast Iowa) co-wrote the song originally during a gray, depressing Iowa winter.

“In a personal way, when I wrote that song, I was reflecting on personal times – ups and downs, life before pandemic,” she said in a recent phone interview. “It’s a song of looking for some peace and some presence, and faith and surrender in a turbulent world, and life being full of ups and downs. As a songwriter, I really rely on songwriting to process all of my feelings.

“I have a fair amount of songs that are about wanting to find some peace of mind, faith and presence to surrender, and feel that sense of safety and well-being within my soul, with a bit of existential dread thrown in,” she said.

“That song was unrelated to the pandemic, but it’s a song I’ve always loved and it didn’t get a lot of attention,” Lissie said. “It wasn’t a single off the album ‘Castles,’ so then when this pandemic happened, and everyone’s just trying not to lose their minds. It was an unprecedented, totally unreal situation. I’m still in shock – like, what is happening? It just doesn’t seem real, that the world would suddenly shut down and everyone would be going through the same thing across the world.”

She asked people on social media to submit videos of themselves or family members, and the dozens of submissions were edited, compiled and directed by her Los Angeles-based friend Talain Rayne, who’s directed some of Lissie’s previous music videos since 2015, including “Don’t You Give Up On Me.” 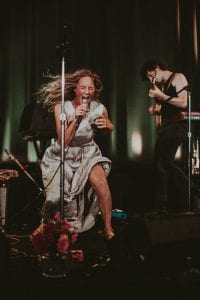 Lissie and her band did a livestream from Minneapolis.

“It was a little touch of good news for once, which is hard to come by these days,” she said. “We’ve worked together numerous times, and he’s become a dear friend as well. He’s a really creative guy.”

Lissie encouraged people to just be true on film, and be vulnerable.

“It could be you just sobbing in your kitchen. I wanted it to really be a good reflection of what people were going through,” she said, noting the snippets range from funny, happy and carefree, to sad and heartbreaking.

“We are all going through this together, so it could be you having fun, cooking in your kitchen, playing with your kids or your dogs, or it could be you really struggling ‘cause this is really scary.”

“It’s isolating and it’s lonely. You can’t see your family, you can’t go anywhere,” Lissie said of the pandemic. “This is really hard.”

“For whatever reason, people think of vulnerability as some kind of weakness, but I think it actually takes a lot more courage and bravery to be vulnerable than it does to be put together and tough,” she said. “I wanted people to have a chance to really have a chance to show what they were experiencing.”

“The new video demonstrates both the sadness and resilience of folks during the global shutdown,” said a recent piece on Lissie at americansongwriter.com. “It’s moving and honest and indicative of what Lissie loves most about what she does for a living: feeling bonded with someone and something.”

“It’s beautiful, uniting, unifying, humanizing,” she told the magazine. “I choked up seeing some of the families. When you go through something hard, you think you’re the only person who understands. But I love my job because I get to not only express myself, but I get to share in a universal thing that comes with that.”

From a fatal Tennessee tornado to a global Covid crisis

Lissie’s last live gig, in front of an audience, proved fateful and fatal.

On March 2, 2020, she was among the late-night performers in Nashville, Tenn., supporting then-Democratic presidential candidate Bernie Sanders the night before the Super Tuesday primaries (Sen. Sanders lost Tennessee to Joe Biden).

That Monday night, after midnight, a Nashville tornado killed 24 people and destroyed the beloved live-music venue Lissie played then. The internationally acclaimed singer/songwriter was one of 20 artists performing at Basement East in east Nashville.

“It was more about just getting people together, to be empowered to go to the polls the next day, singing inspiring songs about making change,” Lissie said March 4 from Nashville, noting she sang Neil Young’s “Rockin’ in the Free World” at 10:30 p.m. 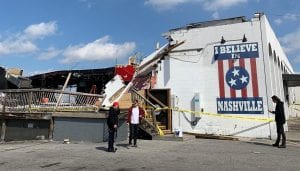 Basement East in Nashville, the day after it was destroyed by a March tornado.

The original Basement music club and Basement East are local institutions, “fixtures of the Nashville scene,” she said. “I was asleep by 12:30, didn’t hear the sirens. I had no clue, and the next morning, I realized that two hours after we got off stage, it was completely gone. It’s just devastating; it’s just crazy.”

Lissie said this week that she knew live music for the foreseeable future was over by Friday, March 13.

“It seemed like everything was gonna be canceled, and so much uncertainty that everybody globally was suddenly going through, we’d never thought we’d be experiencing collectively,” she said, noting she came up with the idea for the “Peace” video soon after. “So we wanted to do something as we were taking things online, doing online stream shows.”

“It’s been a weird year. Everything in my life has turned upside down,” Lissie said, adding she also endured a breakup. “Everything has been really amplified, and the only reason I think we can keep it together is because everybody’s going through it. It’s weird we’re living in a time where we’re all simultaneously going through a lot of really intense stuff.”

Lissie didn’t have many tour dates planned this summer, but did schedule a June 21 concert in Oslo, Norway, to celebrate that 10th anniversary of her debut album, “Catching a Tiger.” That’s now rescheduled for summer 2021 at Oslo Opera House.

“My song ‘When I’m Alone’ from that album was No. 1 in Norway for like a day, and that was 10 years ago,” she said. “That led to me having a really beautiful career in Norway, so it felt special to go back to Oslo and celebrate there, reunite with my original bandmates. It was gonna be awesome – we were going to play the original album in its entirety.” 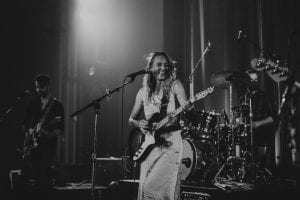 Lissie at the Parkway Theater Aug. 2.

After doing some solo acoustic livestreams from home, Lissie did a virtual livestream Aug. 2 from the Parkway Theater in Minneapolis, the first time she’d played with her band in five months.

“There was no audience, but I actually got to perform with a band on a stage, and it felt just so amazing, I thought I was going to burst into tears every song,” she said. “It felt so good to be up there again.”

Twenty percent of the $15 cost goes to the theater and national “Save Our Stages” effort. The livestream at theparkwaytheater.com/all-events/lissie-fullband-livestream is available through Aug. 31.

“Music venues aren’t going to make it unless they get the government to help give them some assistance,” she said of “Save Our Stages.”  “There was a lot of cost involved in putting the show on, like hiring a crew and an audio-visual team. It felt good to hire a crew, hire the audio-visual and editing folks, and create a situation to be able to have my band working, so we could be working.”

“I have a feeling the earliest like normal capacity live shows will be happening is next spring,” Lissie said. “I don’t know that anything is really gonna happen for a while.”

The 9th-annual Laura’s Legacy concert (which she and her family started) planned for early June at Schwiebert Park in Rock Island, had to be canceled until next year.

The event has raised over $100,000 over the years, to benefit the ALS Association of Greater Chicago (serving Central Illinois, Greater Chicagoland, and Northern Illinois) and ALS Research University of North Carolina in support of raising awareness of ALS, patient support and research.

“In 2010, my aunt Laura passed away from ALS, a terrible disease for which there is no known cause or cure,” Lissie has said. “As a way to celebrate Laura’s life, my family and I decided to create an annual event of music, in a family-friendly environment on the Mississippi River in our hometown. ALS is life-threatening; it’s a death sentence.”

Rather than music, Lissie has spent a lot of time in the past few months growing vegetables, flowers and gardening, and traveling to see family. 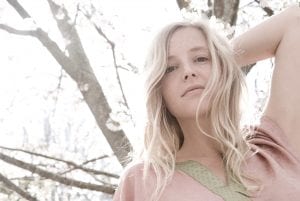 Lissie is a 37-year-old Rock Island native who’s found fame around the world.

“About half the time, I’m just losing my shit, but on the days when I focus on all the things I do have to be grateful for…down to our vision and hearing and able-bodied hands and arms and fingers. I’m trying to focus on what I’m grateful for,” she said.

“Being in the outdoors is where it’s at for me; that always makes me feel a little more grounded,” she said.

“If you get through it, when you come out the other side, what a powerful person you’ll be on the other side of this. We’re all gonna learn so much,” Lissie said.

“I look around and the way people act so selfish and stupid and arrogant and entitled, and they don’t even want to know the truth,” she said, noting anti-maskers in public. “They don’t want to know what science has to say. They don’t want to listen. I wonder how we as a nation have lost the ability to think critically and trust in science and medicine.”

“Wearing a mask isn’t your freedoms being taken away. It’s making the statement that you care about other people enough to be mildly inconvenienced,” Lissie said. “Masks are more for helping other people.”

“Everyone has a different idea what’s true, what’s conspiracy,” she said.

On July 31, Lissie also released a new single, “Just Because I Can,” a previously unreleased track from “Catching a Tiger.” She told papermag.com of that 2010 debut:

“I was green, I was fresh, I was fiery and I was really determined. I think of myself as being pretty fearless in my early to mid-twenties; I just had this unshakable faith. In some way, shape or form, this is going to work out. I don’t know when, in what way, but hopefully, I’m going to end up getting my music out to people. I really felt strongly, so I admire 10-years-ago-me.”

She may no longer be as green, but Lissie remains fiery, determined, kind and refreshingly fearless.