Sara Barto was looking forward to her 40th birthday on Friday, March 13. She and her husband Dave were planning to go out of town for the weekend. The world had other plans.

A bartender at the new Off Point Pub, on Davenport’s Hickory Grove Road, the Bettendorf woman went to the doctor that day after having side pain and nausea. After several tests, including an ultrasound and liver biopsy, Barto was diagnosed with stage 4 colon cancer. 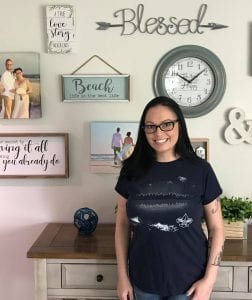 She started chemotherapy immediately but lost her job soon after when the then-four-month-old bar had to close due to Covid-19. Barto was embraced with support from family and friends (she has three sons), and an unexpected source – the new charitable group QC HIVE, formed by her friend Donovan Gustofson.

He originally started QC HIVE as a Facebook group, for people to help struggling local musicians, small bars and restaurants, one each day, asking people to donate at least $1 and share the post.

The group has grown to 6,366 members as of May 14, and has extended its reach to serve not only small-business owners and musicians, but everyone from DJs and sound engineers, to hair stylists, other artists, bartenders and people who work with kids. It raised over $31,000 in its first 52 days, or more than $600 per recipient.

“It’s such a great way for even people who don’t have a lot of money, to help people, even if it’s just $1 a day,” Barto said. “I feel like everybody can afford that to support people in our own community. These are people we know, that we go see on the weekend play live, or we visit their establishments.”

Though her husband is working from home in his John Deere IT job (with health insurance), they have some big out-of-pocket costs for her cancer treatment. They have a 20-year-old son in the Marines, in Texas, and 12-year-old twin boys. Barto initially didn’t feel she deserved the HIVE help.

“I’m just a bartender. Some of these people are just amazing business owners and musicians, and I’m just not sure,” she said, noting she’s also tended bar at Davenport’s Pour House and the VFW in Moline. “He was like, ‘Oh no, so many people know you, they love you, they want to help out and do what they can. So, OK, that’s fine.”

“So many people really went above and beyond,” Barto said of HIVE donors. “I was meeting people I didn’t know before, strangers, sending me messages and care packages, was just so amazing.”

Since Off Point Pub just opened in November and closed so soon, it will be an uphill road to reopen, she said. “It’s so hard to even open a bar, and then to be closed for months without turning a big profit,” she said. “I know she’s struggling.”

Jenny Lynn Stacy, of Davenport, also is a mom of three with health concerns.

A guitarist and singer-songwriter who heads the band The Dirty Roosters, Stacy is immuno-compromised, meaning her immune system mistakenly attacks healthy cells and she’s prone to autoimmune diseases. She’s been hospitalized a number of times.

Raised in Moline on bluegrass, Stacy has played in the area for 20 years, and calls her style “blue-trash.”

“I had so many influences, between your main bluegrass stars, and They Might Be Giants, just weird stuff piled in,” she said, adding she has affinity for ‘20s and ‘30s jazz, and ‘60s B-sides. “I like to keep things interesting.” 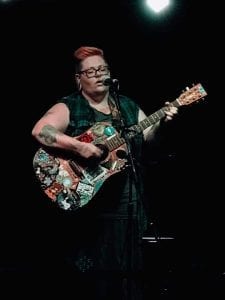 She and her second husband run a sound production company, working for other bands, where she handles lights. They were booked through September 2020 before the pandemic shut things down.

Stacy also is a crafter at home, and sells things online. She crochets “worry blankets,” which she’s been busy doing the past couple months.

A member of QC HIVE, she’s donated to other musicians. “This is probably the most level playing field all of us will be on.”

When Stacy was picked as a recipient and saw the donations, “I cried a lot that day,” she recalled. “I was overwhelmed and humbled. It was just such an outpouring of support. I know there’s a lot of assholes running around right now, but I’ve also seen a lot of good come out of people.

“I’m blessed that I surrounded myself with a community that gives a shit, for lack of a better phrase,” she said. “It’s helped tremendously. I have three teenagers.”

“It helped me catch up on a couple bills and I slept a little better, you know?”

Stacy also live-streamed her music that day for tips. “It’s always nice to know you helped someone get through their day by doing what you do,” she said.

“There’s definitely a need that needed to be met,” she said of HIVE. “People came forward and made a conscious decision that they were going to be empathetic and help out our community – especially parts of the community you don’t necessarily think about. Like your sound production people and musicians.”

“I think the group is phenomenal,” Stacy said. “It’s been excruciatingly positive. It’s almost painful, people are so uplifting at a time, it’s like an oasis. It’s nice to see something good happening while the rest of the world collapses in on itself.”

Stacy has been tested for Covid twice (negative), and is on a new medication that increases her chances of catching a virus like Covid.

“Being careful has definitely upped itself, but I’m not doing too bad,” she said, noting she also has rheumatoid arthritis in her hands. “I can’t complain; I’m still upright and still kicking. I keep my kids busy, so we’re doin’ good.”

Aimee Ford — a Moline-based visual artist, tattoo artist, and former children’s art instructor — is also both grateful and giving as other Q-C creative types come together to support each other.

“It’s been crazy. It was very humbling to realize how kind people can be. I have been a waitress; that’s all I ever did. I was a waitress, then I was an artist,” she said.

“I feel that people who get charity also give charity…I just don’t know how you couldn’t. I think $1 speaks so much. I’ve donated $5.”

“You spend more than $1 on every single thing every day, so why wouldn’t you want to give as dollar to local people who are struggling right now?” she asked. 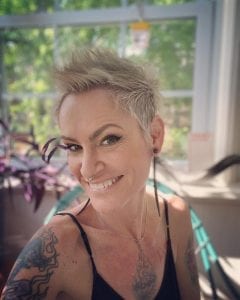 Ford was a waitress for 25 years (at Faithful Pilot, Café Fresh and TGI Friday’s), and now she and her husband Josh (a photographer and videographer) have adjoining studios on the ground floor of the LeClaire Apartments in downtown Moline. They have a 17-year-old son, Brody, who marked his birthday in quarantine.

She’s had her tattoo business for just a year, was jam-packed in March, with clients booked through April and May, before things shut down in mid-March.

When she was stung by the HIVE, “That was a pretty fantastic feeling day,” Ford said. “It’s really hard as an artist to stay happy and motivated. I’ve tried so hard to keep everybody else happy and motivated, that I forgot about my own emotions.”

As a restless, active “people” person, it’s been very hard to be closed and quarantined, she said. Ford lauded Gustofson for having the foresight to serve the needs of so many people, since he launched the organization March 23.

“I just think it’s amazing,” she said. Gustofson and his friend Erica Adamson (who have organized “Come Together Quad Cities” benefits in the past) are “always looking out for other people, and that speaks volumes,” Ford said.

Expanding the reach of a community’s love

Gustofson has wanted QC HIVE to help more people impacted by the devastated economy, especially as he gets 50 nominations every couple days, and everyone is hurting financially.

“We’re going to be expanding or casting a wider net for our nominees in the future. I have enough to go through the rest of the calendar year, easily, already,” he said.

Overall, Gustofson has been impressed that even recipients who get a small amount are very gracious and grateful to see complete strangers giving, as well as some of the struggling people who get donations.

Some recipients, like Ford, continue to get small donations trickling in days and weeks after they were highlighted on Facebook.

“I think it’s a testament to a lot of the goodwill people in this area have for each other. It’s fantastic,” Gustofson said. Some of largest totals have gone to people or groups that work with children, like Rock Island’s Center for Living Arts, he said.

To celebrate the HIVE’s 50th day recently, Gustofson showcased artists in Nashville, who are originally from the Quad-Cities, in a live-streamed concert when people could donate. His brother Will is a professional guitarist in Nashville, and QC HIVE plans to feature more local musicians doing similar live streams.

Will performed on the QC HIVE concert, as did Daniel Rangle, Derek Frank, Danika Holmes and Jeb Hart, and Brad Morgan. Others who were featured but couldn’t perform were Nic Johnson and Dave Abdo.

So far, 17 out of the HIVE total beneficiaries are self-employed musicians (excluding the Nashville ones), who’ve seen their live gigs dry up. Gustofson also said he’s been floored with the number of musicians he’s contacted to help, and they decline (some more than once), and instead mention others who need financial support more than they do.

“It’s incredibly generous,” he said. “The amount of goodwill, looking out for your fellow musicians, or fellow neighbors, the amount of energy we’re generating that way, is pretty amazing.”

The HIVE has a core group of 200 to 400 members who give often, and Gustofson would like to see a greater percentage join in.

“The beehive mentality is, if all of us are active and do just $1 a day, by sheer numbers, we could make a huge difference,” he said. “Not all our members can contribute financially, but they can contribute by sharing the post and promoting the page.”