If you’ve ever met Don Faust you’d know he’s one of the nicest, funniest and most positive blokes on this planet. So it comes with some shock and awe that this not-quite-but-sort-of-autobiographical play dives into a not-so-cheery part of his life that under some circumstances would disavow a gleeful demeanor. Leave it to Faust to rise way, way above a troubled and rather tortured past to treat others the exact opposite.

I think that’s why the play hit me the way it did. 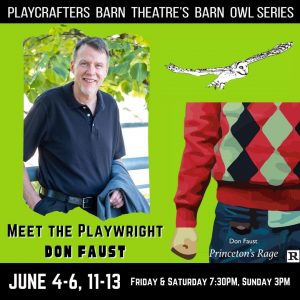 On a few levels.

I have known Don for … who knows … maybe close to 20 years now and though I was never super close to him, I did work with him on several occasions and was always amused by what he brought to the table.

I think it also hit me because like many who have chosen a life in the arts whether it be professionally or as a hobby, we’ve all been the subject of excessive bullying and often times the punch line to many a joke made by those who may have (still) never left “high school.”

It also hit me because I absolutely love, love, love, love experiencing something that I know was once an idea come to life. I can only imagine how Faust, his superb director Madison Duling and the talented company of Princeton’s Rage must be feeling. This is the birth of something special and we are all here together for a singular moment: WITNESSING A NEW PLAY COME TO LIFE. It is definite high for everyone on stage and off and in the seats.

Princeton’s Rage is also a perfect piece for this moment. 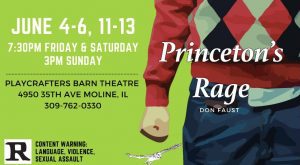 It’s something we don’t see a lot in the Quad Cities and I have to give credit to Playcrafters for keeping up the tradition of introducing new works to the Quad City audiences. I remember … way, way, way back in 2001… when they premiered a new play by Michael Schmidt entitled Hail to the Chief (my awkward Playcrafter’s debut), and it is a thrill to see them STILL owning the mission over 20 years later. So, go, Playcrafter’s, go! I dig it and others do, too!

In Princeton’s Rage, our central figure Princeton gave up his hometown of Chicago for LA and he has never turned back. Through a series of events, his past comes to town and what happens then… well… as Sondheim wrote, “Well that’s the play and we wouldn’t want to give it away.” (Bad joke. Yes. Yikes.)

That dilutes it down, but it’s extremely nuanced — even if somewhat predictable — and often times borders on the cliche. It’s not to say that it’s entirely a bad thing. There IS something to this piece, but I’m not sure it’s been found. There were moments that I wished were a little less weighty and anti-climatically dramatic. The script soars, however, in its lighter moments as Faust has crafted some witty banter and 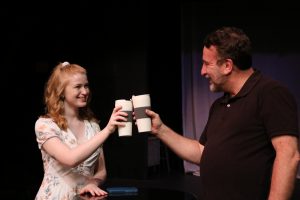 superb punchlines (a specific RENT reference is BRILLIANT). It sinks in the moments of supposed dramatic tension? It never quite hits the depths it’s talking about or actually going for until the last 15 minutes when it reaches some O’Neill-esque moments that are exquisitely written. Faust eventually reaches THAT level but it is 80 minutes in and it seems too late.  It’s extremely moving but it makes you wonder why he didn’t apply that skill (which he obviously has) to some of the scenes that fall flat. There is something there and with some more time and reflection, I think an even better, more powerful and more even piece will emerge.

They take years to develop and months to prepare on the professional level and it is a miracle that this piece can be in the kind of shape this early in the game. This is an important part of the process and perhaps before this piece sees other audiences (and it SHOULD) another pass 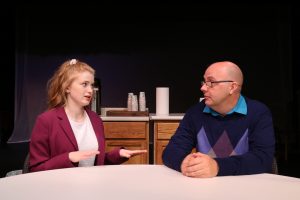 at the script can be done? That’s the beautiful thing about a new work: this first production is only the first step in what is hopefully a long life! Of course, opinions of art are funny, because what I saw could be the exact opposite of what someone else thought… and Faust and Duling might want to roll up a newspaper and smack me on the nose and say, “NO, TRISTAN, YOU ARE WRONG!” Who knows!

That is not to say it’s not necessarily working, because it is… sometimes. There are enough things holding Princeton’s Rage back and it was tough to completely immerse myself in the world.

Time for another brief tangent: the curse of doing theatre for a living and generally being obsessed with putting it together, it makes it nearly impossible for me to just sit back and enjoy a show without finding things I’d like to fix or things that could improve upon it. It is not the most fun but it never comes from a place of malice. And believe me, I’m well aware of the irony of me essentially bashing a show that teaches the lessons of kindness. But here we are. So let’s get my issues out of the way and get back to the good stuff!

And we are back.

So. Moments that took me out?

Among them – odd silhouette flashbacks that didn’t do much to propel us forward (perhaps some moving monologue with Princeton describing them would packed a more powerful punch?); extremely lengthy and awkward transitions that were often times without any sound to mask the backstage whispers of costume changes or cover the near minute long moments of nothingness. It was the general lack of atmosphere – stagnant and uninteresting lighting and missing sound cues – that kept the show from leveling up.

There were more Swing-And-A-Miss technical moments than hits and it was jarring. Much of it felt incomplete, I guess, and I would be 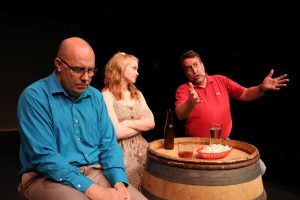 remiss to not mention the glaring mistakes because they were all the more noticeable due to the success of what was happening between the actors.

Director Madison Duling successfully navigates a touchy subject and some lofty themes with ease by staying out of the way. Or at least it seemed that way and THAT is a compliment. It seems as if the actors were more often than not just… being… and I bought into the world. That being said, the scenes usually took a few lines to GET GOING and usually had a hard time nailing an ending as well but that is perhaps more with what’s written than what was directed. Duling could’ve found more inventive ways to utilize the space to reduce some transitional issues but her focus on the actors and passion for the piece was evident and is worthy of applause.

Central to the success of Princeton’s Rage is the solid quartet of performers — Eric Teeter (Princeton), Adrienne Jane Evans (Tracy), Jesse Mohr (Mr.  Reilly), and Gary Talsky (Rage). Mohr does a lot with very little despite the fact his Mr. Reilly — Princeton’s boss — is vile and unlikable, you wish had a few more moments as he brings a much needed energy to table. Evans is superb as Princeton’s coworker Tracy; her personality, her delivery, her EVERYTHING made you smile and subsequently tear up – she is serving major Reese Witherspoon vibes and EVERYBODY is here for it. Talsky is a revelation here as Princeton’s high school classmate (and Tracy’s dad), Rage, and watching his descent is like a master class. His final 15 minutes – which I reference above – features some of the finest acting I’ve yet seen on the Playcrafter’s stage.

Teeter’s Princeton, the central figure of Faust’s story (and a version of Faust himself) – is just that: central. He isn’t as compelling and given much to do but react to everyone else LIVING. His Princeton is fairly even – no extreme highs, no extreme lows (some in silhouette form but 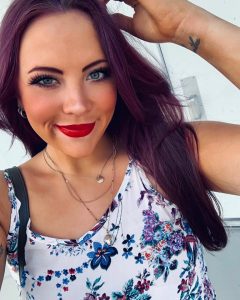 Madison Duling is a 23-year-old Alleman alum and director of “Princeton’s Rage.”

never in “real life”) – and you find yourself not entirely sure how you feel about him. Teeter is well mannered, controlled and solid (his deadpan deliveries are extremely funny)  but he never gets to fully shine and though we KNOW he’s a tortured fella, we never really FEEL it.

This show is NEW.

This show is RAW.

This show is IMPORTANT.

Should you see it?

But neither is Chekhov, Shakespeare, Simon…

And who really cares about my opinion, right?

The arts need your support.

These artists NEED YOU.

It’s been a long 15 months and we all need this to survive. This is our therapy, the artist’s therapy, and this show is important and should be supported. Don Faust, Madison Duling and this talented company have created something beautifully moving and poignant.

As always, to quote the great Doug Kutzli, “Buy a ticket, see a show!”