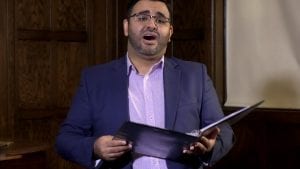 But recording two recent recitals at the Muscatine Art Center may be among the most meaningful so far in the young tenor’s career.

Mendoza, a Mexican-American 34-year-old, is a Muscatine native and last month he filmed two solo programs in the 1921 music room in the Muscatine mansion at 1314 Mulberry Ave., as a partnership with Moline-based Living Proof Exhibit (LPE). The first 20-minute program — accompanied by Jessica Monnier on the piano – will premiere Friday, Nov. 13 on Muscatine Access Channel Nine at 4 p.m. and 9 p.m.

A second concert will air at the same times on Dec. 4. Three days after each concert, the videos will be available on the YouTube channels for both Living Proof Exhibit and Channel Nine, as well as www.muscatineartcenter.org.

“I think that the arts, they can be such a great escape for people, and especially those impacted by cancer,” Mendoza said Tuesday. “A lot of times, people are just looking for something else to put their mind to. And the arts are definitely such a great outlet for that. People also can learn more about their own creativity through the arts. I think what they do is great.

“I was very happy to join them in whatever way they could, when they first approached me,” he said of working with LPE over the past 18 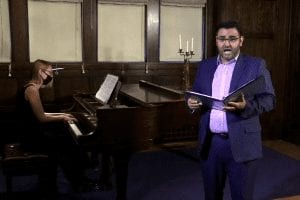 months. The mission also can apply to the general public, to offer comfort and hope during this isolating pandemic.

“We can’t have the sessions we had planned, so let’s have some concerts, and this is another great way to reach out and bring the therapeutic benefits of the arts to everyone,” Mendoza said. “This is a great time for all of us to just enjoy the arts in any way that we can.”

Mendoza is a Juilliard-trained tenor who has performed with Lyric Opera of Chicago, Grant Park Music Festival, New York Society for Ethical Culture, and Aspen Opera Theater Center. He received a Doctor of Musical Arts and Master of Arts degree from the University of Iowa and is currently part of the voice faculty at Augustana College in Rock Island and Kirkwood Community College in Cedar Rapids.

As executive director for the 10-year-old nonprofit Living Proof, Pamela Crouch is passionate about providing the therapeutic benefits of the arts to people impacted by cancer. The Muscatine Art Center has been a partner since 2017, and together the two organizations planned to hold singalong events with Mendoza as guest star.

However, singing is an activity that creates a lot of small airborne particles, and people touched by cancer have good reason to take extra precautions to guard against the coronavirus, so Crouch and Mendoza agreed to air the concerts for free.

“The original idea was, there would be music — he would sing, people would bring songs they wanted to share that either he would sing or 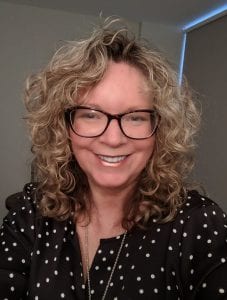 they would sing,” Crouch said Tuesday. “We were going to incorporate writing and journaling, and make it a very community gathering – a gathering around music.

“Of course, we cannot gather, but we’re lucky enough that Juan Carlos was able to record his concerts, so it’s in a concert format this year. We were able to do that, which was pretty terrific,” she said.

“At Muscatine Art Center, if you’ve ever been there, they have a stunning, just beautiful music room. So the idea is, quite frankly, in the future we still want to pursue this concept of music and writing, that people are sharing songs that mean something to them, or in memory of someone.

“We truly want people to reach out and utilize music as one of the art mediums, to reduce the stress of cancer diagnosis.”

Living Proof – which offers free arts programs to people impacted by cancer — had a large survivor art exhibit at Muscatine Art Center in 2019, and they’ve had creative sessions there, including painting and clay, amid a variety of media, Crouch said.

At the exhibit opening, was the first time LPE had every artist (except one) attend, with 30 artists from a 200-mile radius who attended, she said. “It was wonderful and we were able to reach people in Muscatine who have continued to show with us,” Crouch said.

“The concerts are intended to provide momentary respite from struggle,” she said. “Although this project was originally focused on the needs of those touched by cancer, the format of the pre-recorded series makes it possible for more people to use this concert series as a temporary getaway. 2020 has taught us the value of the arts in enhancing our quality of life.”

Using the same principle as the LPE creative sessions, the new filmed concerts are free for people to enjoy.

“Cancer is so expensive, we don’t want any support to be costly,” Crouch said. “And since we changed to a virtual format, we kept that same concept behind having our creative sessions as free – to make them more accessible to everyone. What’s terrific is that because it’s virtual, this program doesn’t have to just stay in Muscatine.

“People will be able to share it with their friends and family, and once it’s up on our YouTube channel, this concert will be able to reach people who are touched by cancer throughout the country. Goodness knows, this pandemic has increased the stress of a cancer diagnosis.

“People with cancer and their loved ones are having to isolate more,” she said. “They are feeling much more stress because of their compromised immune system, so being able to not only listen to a concert – Juan Carlos explains each piece before he performs it, and you do get to see a little bit of the music room.”

A life filled with music

Mendoza is based in Coralville, and has performed throughout the Midwest. As a soloist, he has sung with the Chamber Singers of Iowa City, Galesburg Community Chorus, Des Moines Community Orchestra, and Muscatine Civic Chorale. As a choral singer, Mendoza has sung with Lyric Opera of Chicago, Grant Park Music Festival and Border CrosSing, and is a member of American Guild of Musical Artists.

As a recitalist, he’s performed throughout Iowa, Chicago, and New York, and has a passion for art song, specifically the Spanish-language art songs of Mexico. Outside of singing, Mendoza works to support Latinx youth with continuing education and involvement in the arts and is a 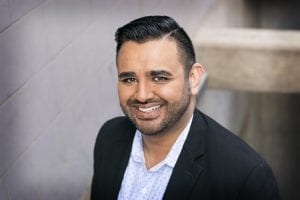 His packed resume includes tenor soloist in Haydn’s Missa in Tempore Belli, Ford’s Bolts of Melody, Bach’s Lobet Gott in Seinen Reichen (Ascension Oratorio) and Tenor Evangelist in Pärt’s Passio. Stage roles include Freddy in My Fair Lady, Tigranes in the North American premiere of Cavalli’s La Doriclea, Gloster Hemming in The Mother of Us All, and Bill in A Hand of Bridge.

Mendoza also has served on the voice faculties of Drake University, Knox College, and Monmouth College. After studying at Juilliard, he said he wanted to return to his Iowa roots.

“I kind of missed the Midwest vibe, so I came back and immediately started teaching,” Mendoza said, noting there was about seven years 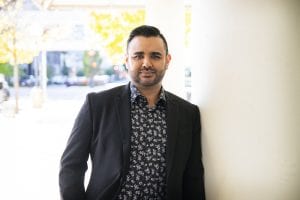 from when he finished his master’s and started his doctorate at University of Iowa (which he completed this past spring).

Mendoza performed with the summer Grant Park Music Festival chorus for four years, but this past summer was canceled among the scores of other arts events scrapped this year. He’s taught at Augustana three years, and has been with Kirkwood on and off since 2012 (the last three consistently).

Mendoza planned to start bilingual programs with Living Proof, to serve the large Hispanic population in the Q-C and Muscatine.

“We wanted to make sure these communities are as involved in the arts and enjoying the therapeutic benefits of the arts, as much as any other community and we didn’t want language to be any sort of barrier,” he said. “I did include a couple Spanish pieces on the concert.”

Mendoza has had several concerts canceled this year, and was to be in the cast of Opera Quad Cities’ “Madame Butterfly” this summer, which was postponed to next year. His voice teaching has moved to a combination of online and in-person (Augie this fall is mostly in-person and Kirkwood is virtual, with Mendoza teaching from home).

The tenor is friends with the composer Savoy, who is based in North Carolina. Mendoza attended Juilliard (2004-08) with his daughter.

“He did grant us permission to record these pieces. I’m grateful for that, because I think his music is really great,” Mendoza said. “I have recorded some of Tom’s music with him at the piano.”

A stunning room and a musical future

He is especially grateful to have performed in his hometown, in the 1908 mansion owned by lumber heiress Laura Musser McColm (1877-1964), which has served as the Muscatine Art Center since 1965. The music room was added in 1921, in part to accommodate a large pipe organ. 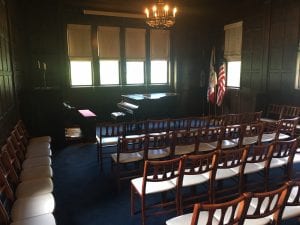 The 1921 Music Room at the Muscatine Art Center.

McColm was trained as a vocal musician and used the room for lessons and performances. Some of her performances were broadcast over the radio in the mid-1920s. In addition, the space was used for meetings of Laura’s various clubs and as a ballroom for dances.

Crouch and art center director Melanie Alexander started planning the singalongs with Mendoza more than 18 months ago. His skill as a performer and his enthusiasm for music have potential to draw in those who are not ordinarily interested in opera, Alexander said.

“Our organizations have adapted on many fronts,” she said. “The positive is that our online and video content helps us connect with more people, and the staff is picking up new skills along the way.”

Crouch would like to pursue similar LPE music events in the Quad-Cities in the future.

“I would love to expand music outreach, especially if it’s something people can participate actively in,” she said. “Once we can return to in-person, or even continuing our hybrid sessions, so we’ll always have a virtual component to it – but even a virtual component, you can actively participate in a singalong. Ultimately, what we really want people to be able to do is, share music that means something to them.” 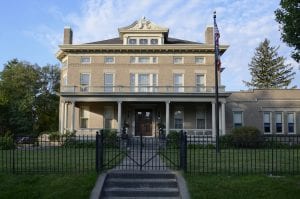 The Muscatine Art Center was originally built in 1908 for newlyweds Laura Musser and Edwin McColm.

“All of our programs in all the arts, we’ve all seen how important all the arts are, especially when we are isolated at home,” Crouch said. “All the arts programming that we do can work together, to continue as I said, to reduce that stress of a cancer diagnosis, and bring hope and joy people touched by cancer.”

There have been some musical creative sessions in the Quad-Cities several years, including ukulele, and a partnership with the Quad City Symphony with the commissioned opera “Karkinos,” which will premiere in February in Moline.

“The music has been part of our creative sessions, but not as interactive as we’re doing with Juan Carlos,” Crouch said. “One singalong session was held at the Quad City Botanical Center Sun Garden a couple years ago, led by a woman playing guitar.

“It was really calming,” she said. “It was fun to just get together. As you can imagine, it was beautiful in the Sun Garden, so people really enjoyed that.”

The Muscatine Art Center hours are Tuesday, Wednesday, and Friday from 10 a.m. to 4 p.m., Thursday evenings until 7 p.m., and Saturday and Sunday from 1 to 4 p.m. Admission is free.

For more about LPE, visit www.livingproofexhibit.org.