As a lapsed Catholic and current wine lover, I was fully prepared to be intoxicated by “Drinking Habits,” the latest feel-good farce at Richmond Hill Players in Geneseo.

I wasn’t prepared for how drunk with delight I got, I could barely drive home after Sunday’s picture-perfect matinee at the Barn Theater in Richmond Hill Park.

In the silly Tom Smith story (intricately deep with secrets and many surprise romantic and family connections), two nuns at the 1965 Sisters of Perpetual Sewing have been secretly making wine to keep the convent’s doors open, but Paul and Sally, reporters and former fiancées, are hot on their trail to expose the story.

They go undercover as a nun and priest, but their presence, combined with the addition of a new nun, spurs paranoia throughout the convent that spies have been sent from Rome to shut them down. Wine and secrets are inevitably spilled as everyone tries to preserve the convent and reconnect with lost loves. 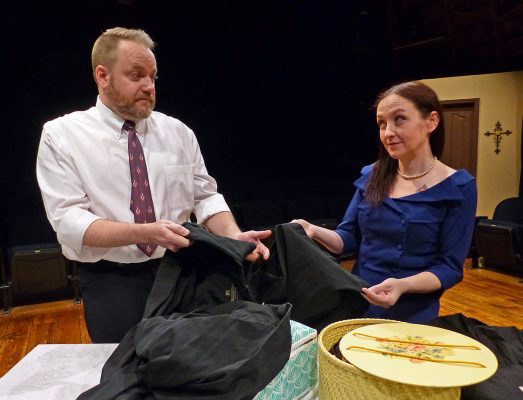 “Drinking Habits” was especially satisfying for me since it had shockingly been over three years since I’d seen a show at the comfortingly intimate, 160-seat rustic venue.

After the cancellation of the entire 2020 season (thanks, cursed Covid), RHP returned for an abbreviated three-show lineup in 2021 (I don’t know what my problem was during most of 2019).

“Drinking Habits” is the outstanding opening entry in the 2022 season. When I say “feel-good” when it comes to this irresistible comedy, that seems to be the show’s only goal, and they succeed divinely. Veteran director Mike Skiles wrote in the program it has everything a good comedic play should – “the characters are funny and charming, the plot is simple yet entertaining, and the audience leaves with joy and laughter in their hearts.” Indeed. 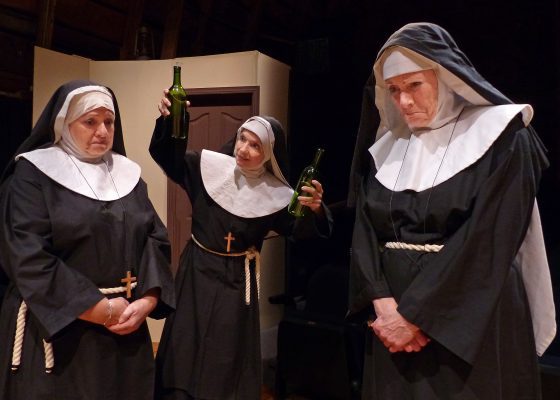 He wrote that the expert sewing nuns – and secret vintners — Augusta and Philamena (played with precise comic timing and bright color by Carol Neuleib and Terri Nelson, respectively) “are well-meaning nuns who are just trying to do what needs to be done.”

One of the sweetest and most admirable aspects of “Drinking Habits” is that all eight characters are good-natured and don’t have a mean bone in their body (too bad so many disgusting Catholic priests and corrupt church leaders didn’t operate the same way).

The strict, conservative Mother Superior (Julie Gray, with a goofy heart of gold) derides wine as “Satan’s toilet water” and the wine-making sisters are desperate to make sure she doesn’t find out their devilish deeds, which alone is a consistent source of tension and jokes. Their order is under threat of closing from corporate (the Vatican), and Mother Superior confesses her own sin (one of many, many to come from all) by not telling Rome how small they are.

The reporter pair (Sally left Paul at the altar) are wonderfully played by Dana Skiles and Justin Raver, who wield their own secrets by impersonating a sister and father (later he gets into hotter holy water by pretending to be a nun and a cardinal), Sally is jonesing for the front page, and is tired of writing fluff, so she’s eager to break some hard-news scandal. A product of Catholic schooling, Paul is scared of nuns and really doesn’t care about getting the story, only getting Sally back.

Mother Superior expects a new nun, Mary Catherine (embodied with utmost innocent idealism by Elizabeth Shaffer) and when Sally impersonates Sister Mary, she quickly takes on the absurd name Mary Mary. Mary Catherine is still in training to be a nun, so the hijinks of her not being a full-fledged sister is milked to the hilt.

Father Chenille (a former magician played by David Beeson, and his old trunk plays a key role) is worried by the sudden appearance of “Father Paul,” whom he thinks is out to replace him. The genial handman/groundskeeper George (a lovable Tom Akers) turns out not to be as intellectually slow as he first seems, and his affection for wine provides one of the plot pivots towards the play’s end. 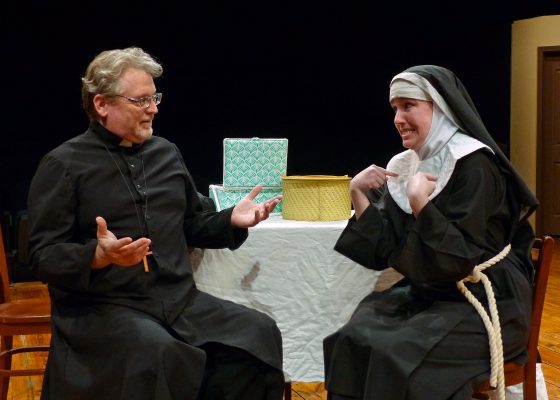 While “Drinking Habits” offers a warm bath of theatrical balm, it is far from dumb or mindless. The script is tight and clever, with many moving parts, that neatly wrap up at its “aww-inspiring” conclusion. True to farce’s tradition, several doors play pivotal parts in the goings-on, and RHP is the ideal setting in the round with entrances and exits at four corners, plus a closet that Paul and Mother Superior are quite fond of.

Being a reporter, I naturally identified most with Paul and Sally, and the cynicism of Skiles’s career climber and generosity of Raver’s harried love interest offer great chemistry and a solid ground in reality. The entire production is a welcome, bewitching magic trick of its own kind.

“Drinking Habits” continues April 7-10. On Thursdays, Fridays, and Saturdays, doors open at 6:30 p.m., with the show beginning at 7:30 p.m. Sundays are 3 p.m. matinees with the doors opening at 2. Reservations are recommended and can be made by calling the Richmond Hill box office at 309-944-2244 or by visiting rhplayers.com. Late seating is not permitted; no one will be admitted to the theater after the show has started. Admission to all performances is $12. 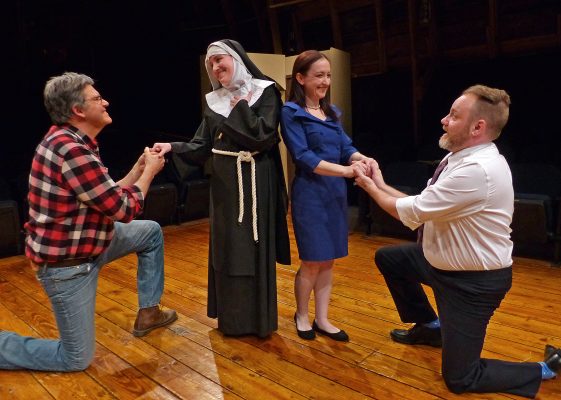 Jonathan Turner
Jonathan Turner has been covering the Quad-Cities arts scene for 25 years, first as a reporter with the Dispatch and Rock Island Argus, and then as a reporter with the Quad City Times. Jonathan is also an accomplished actor and musician who has been seen frequently on local theater stages, including the Bucktown Revue and Black Box Theatre.
See More Articles From Jonathan Turner
Advertisement
Tagged: New Richmond Hill “Habits” is a heavenly delightRichmond Hill