SUSTO, PETEY and HEMBREE/DESERT NOISES are coming to 57’s RACCOON MOTEL; 34 NEXT WEEK!! 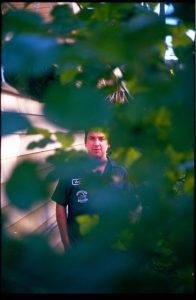 As the times remain crazy, we’re doing everything we can to keep bringing great artists to the 54 and it’s been a big week for new announcements as we’ve added shows with Susto (a rare and special solo set from Justin Osborne — Aug. 21), Hembree/Desert Noises (Aug. 28), a record release show with Petey (Sept. 12 which also features James Austin Johnson and Bon Iver collaborators 81355), LALA LALA (April 13, 2022) and the return of Joshua Ray Walker (Nov. 1 — which can’t happen soon enough after his jaw-dropping set opening for Charley Crocket last week). We’ve also added Adriel Denae to the Son Little bill (Sept. 5) and Jeremy Ivey is bringing Dillon Warnek to town Oct. 2. Scour the list of upcoming shows below and grab your tickets where you can. And we thank you from the bottom of our hearts for making our first two weeks so memorable!!
The bar will be open at 5 pm tonight/Friday and Saturday at 4 pm. Starting next Monday, Aug. 16 we will begin our normal bar hours on non-show nights. We will only be closed on Sundays (other than show nights) so come see us and drink our cheap Hamm’s tall boys dry. We also have four incredible signature cocktails on tap that are about as tasty as they come! If you haven’t been in yet for a show, there’s nothing to stop you now. Consider grabbing a sweet MOTEL trucker hat — only available at the bar. See you soon!
ALSO PLEASE REMEMBER that Raccoon Motel members have early access to the following tickets before they go on sale Monday morning :: Susto, Hembree/Desert Noises, Petey/James Austin Johnson/81355 and Joshua Ray Walker!!
GRAB ALL YOUR RACCOON TICKETS HERE :: raccoonmotel.tixr.com

Sean Leary
Sean Leary is an author, director, artist, musician, producer and entrepreneur who has been writing professionally since debuting at age 11 in the pages of the Comics Buyers Guide. An honors graduate of the University of Southern California masters program, he has written over 50 books including the best-sellers The Arimathean, Every Number is Lucky to Someone and We Are All Characters.
See More Articles From Sean Leary
Advertisement
Tagged: Alternating CurrentsAlternating Currents FestivalDesert NoiseshembreepeteyRaccoon MotelSusto