Mercado Gets Almost $500K For New Building Project in Moline 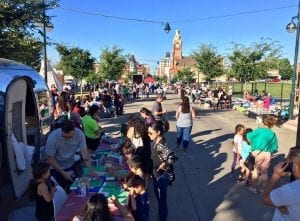 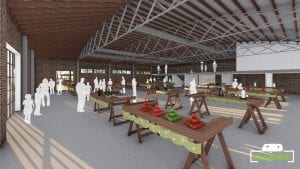 “Mercado on Fifth has been at the forefront of driving economic activity in the Quad-Cities region, having helped develop over 20 new minority-owned businesses since 2017,” said Mercado president Maria Ontiveros (daughter of Chris, and granddaughter of founder Bob Ontiveros).

Individual applicants were eligible to receive up to $500,000 from the state per project, and the amount of the award is based on anticipated costs associated with meeting project requirements and bond guidelines.

“At a time when businesses are facing significant setbacks due to the ongoing Covid-19 pandemic, the Minority Capital Fund will help eliminate obstacles so minority-owned businesses can rebuild and continue supporting their communities,” Gov. Pritzker said in a June 8 release.

“These small, family-owned businesses are the backbone of Illinois, and capital grants will unlock funding to help them expand, create new jobs, and drive positive economic change for their communities.” 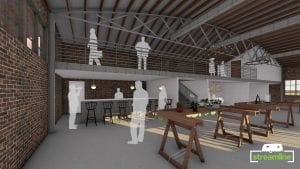 “Too many minority businesses in our state face the same challenges—including a lack of access to capital that prevents them from seeing the full potential of their business,” said Michael Negron, DCEO’s assistant director.

“We created this grant to address what is a core priority for the Pritzker administration — ensuring that all residents and businesses across our state receive access to same opportunities so they can compete and thrive in our economy.”

The Illinois grant recipients represent underserved communities across Illinois, as defined by the CDBG program. The majority of projects planned are for property acquisition and renovation—and every project is expected to create jobs.

The west-side Floreciente neighborhood, with a sizable Hispanic population, has been historically underserved, Ontiveros said. The coronavirus crisis this year has devastated area businesses, and postponed the start of the outdoor market (which typically starts in late May).

“Covid just wrecked Mercado for the 2020 season, as it did many other small businesses,” he said. “Our micro vendors are really being hurt by this. We’re hopeful that phase four or five, the state of Illinois will allow us to open Mercado safely for the vendors and the community to get back into action.”

He’s planning for Mercado to reopen in August, with the year-round center to be renovated this fall. The state grant – which doesn’t apply toward matching a $100,000 Quad-Cities Community Foundation grant received last December — validates the need for the project and should inspire others to give.

“This is obviously a project others are behind, and we should get behind it. If other charitable foundations, corporations get behind us,  we can do amazing things in the community to help small and micro businesses in the Illinois Quad-Cities.”

Building based on community input

Chris Ontiveros said the renovation project will be tailored to the needs of the community. Mercado originally started as a daytime farmers’ market, which didn’t work, and morphed into a hugely successful Friday night all-products market, with entertainment.

“We think the indoor building is going to be a huge opportunity for Mercado, but we’re being very cautious on the design, because just like our farmers’ market concept, we don’t want to assume what the community wants,” he said. “When we build out this building, it’s not going to be to the finished product right away.” 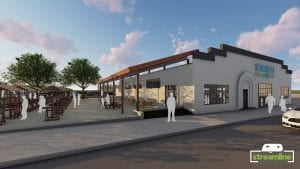 Mercado will leave it for others to decide what to do with it, including possible rentals to other organizations or for private events.

They will partner with local businesses and entrepreneurs to renovate it with new bathrooms, lighting, electrical, windows and doors, HVAC, and a brand-new entertainment patio, Ontiveros said. “We’re not exactly sure what it’s going to be.”

“We want to be open to the Floreciente neighborhood and its use,” he said.

The basic renovation will cost $500,000, but they continue to fundraise, to match the Community Foundation grant.

“We are hopeful for community support to get us where we need to be,” Ontiveros said. “If we can raise another half million, we’ll spend it on the building. We’re a nonprofit with no income.”

Private fundraising – in a capital campaign launched May 5 — has been very limited so far, very challenging with this economy. “It’s a tough business climate, tough nonprofit climate, but you know, we think we can do it,” Ontiveros said.

“We see the building functioning as a Hispanic cultural center, as well kind of a business resource center,” Friedhof-Rodgers said in late April. “Mercado as an organization has helped over 20 minority-owned businesses start. It’s really created access to a system and broken down language barriers, and has helped people really achieve that dream of being a business owner.”

The new building will have an indoor capacity for about 300 people, with an outdoor patio with space for 700 more.

“It will really add to year-round events, as well as Mercado capacity during our season,” Friedhof-Rodgers said.

Over the past two years, Mercado founder Bob Ontiveros has given away over $23,000 to 27 minority-owned businesses to purchase anything from food warmers to an industrial sewing machine.