Mercado Cooking Up Something Special For Its Fifth

Despite the Covid crisis, Mercado on Fifth is moving forth in its fifth year, cooking up some very special things.

While the Moline-based nonprofit — which works to showcase Hispanic food, culture, and business – may postpone the start of its fifth-annual season, it’s also busy creating its first permanent building and has introduced new programming.

Mercado and West Gateway, both managed by members of the Ontiveros family, are renovating the 6,300-square-foot building into a business incubator and event space at a cost of over $1 million. 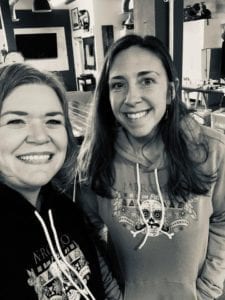 “We see the building functioning as a Hispanic cultural center, as well kind of a business resource center,” she said recently. “Mercado as an organization has helped over 20 minority-owned businesses start. It’s really created access to a system and broken down language barriers, and has helped people really achieve that dream of being a business owner.”

The building will be available for rent to community members or businesses, she said. The indoor capacity will be for about 300 people, with an outdoor patio with space for 700 people.

“It will really add to year-round events, as well as Mercado capacity during our season.”

Pushing back start of season

She noted the uncertainty given the coronavirus crisis will push back the planned May 22 opening this year.

“We are obviously postponing the start of the season and staying tuned with what Governor Pritzker decides is what’s best for the state. We’re evaluating things weekly, and really we have already shifted. We had several events scheduled in March and April.” 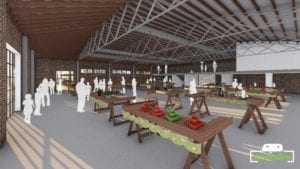 “We’ve been doing off-season events and been extending our programming already, before Covid happened. So we already shifted into doing virtual programming and finding ways to support and promote our businesses without having Mercado.”

“The Covid-19 crisis has brought our attention to the need for small-business training on best practices,” Freidhof-Rodgers said. “I’m so grateful to be in a position where I can share my industry knowledge with other entrepreneurs.”

Before being hired as the organization’s first full-time staffer last August, she was general manager of Ross’, the 24-hour diner in Bettendorf. Her hiring was necessary due to the growth of the outdoor event on 5th Avenue (between 11th and 12th streets) in Moline, expansion into non-summer events, and the need to apply for larger grants.

“We had a mole cook-off, and helped start a Cocina series, culinary cooking classes taught by Mercado vendors, which have been wildly successful,” Freidhof-Rodgers said. 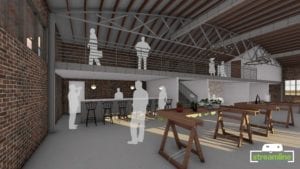 “It’s really filling a cultural void in the community. and the community wants those kind of opportunities for enrichment and learning,” she said. “It’s been fun to plan those things and have them be so well received, really.”

This past January, Mercado partnered with the Quad City Symphony, to present the film “Coco” in concert (with live music), and several vendors at the Adler Theatre. “That was a huge success, and led them to invite us to participate in other events this summer, that I’m not sure will happen,” Freidhof-Rodgers said.

They had over 3,000 people attend “Coco” (in two showings) and events that day, “to really explain about Day of the Dead, and educate the community,” she said. “The same thing with the cooking classes — using food as a language to teach about Mexican history and geography. It’s just all cool stuff.”

STEM activities have included robot programming and spaghetti and marshmallow towers that had to withstand simulated earthquakes.

Read Moline gave away over 1,500 books in Spanish and English during the last two seasons. Nahant Marsh connected children with our local natural environment, by bringing live animals and educational materials to Mercado. 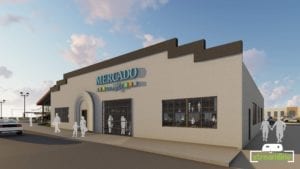 The Moline building’s drop ceiling and all non-load-bearing walls have already been removed, exposing the structure’s original steel tresses. In addition, a 5,000-square-foot outdoor plaza will be built on the south (Fifth Avenue) side of the building to make more room for patrons, vendors and cultural programming.

Mercado is working with Quad Cities-based Streamline Architects to design the multi-use space in the city’s Floreciente neighborhood.

“Mercado has demonstrated how essential it is to celebrate diversity,” said Mercado board president Jayne O’Brien, who has seen the event and organization grow since the 2016 pilot season. “This development is a major win for the whole Quad-Cities region.” 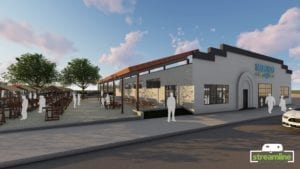 “With Mercado’s upcoming summer event series on hold due to the coronavirus, this is a good time to shift our focus to fulfilling a long-term vision of growing our presence in the Quad Cities,” said organization president Maria Ontiveros.

The group is launching a $500,000 capital campaign on Tuesday, May 5, which is also Giving Tuesday, and Cinco de Mayo. “We see so much potential, and it will also function as an event center, so it will be available for rent by community members or businesses,” Friedhof-Rodgers said of the building, aiming to open this fall.

“With the pandemic stuff, we have focused on the building and getting that done,” she said. “I think it will be just a great spot for the community to enjoy.” 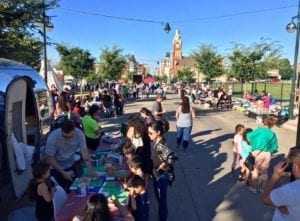 Mercado had to cancel a planned March concert at River Music Experience, Davenport, but has lots of online programming on its Facebook page, such as bi-lingual story time on Fridays; live DJs and bands, and Mexican virtual games.

“Lots of good stuff to keep our community engaged and really continue that amazing momentum that Mercado has captured in the community,” Friedhof-Rodgers said.

They’ll have cooking classes in June that may be held virtually as well. “We think we’ve done pretty well shifting our focus to the virtual stuff, and connecting with our community in ways that we can through technology,” she said.

Since late March, Mercado has offered Friday curbside pickup of Mexican foods for sale, at St. John’s Lutheran Church, 4501 7th Ave., Rock Island, from 2 p.m. to 7 p.m. On May 1 will be homemade mole, and May 8 will be tamnales.

They’re generally vendors that don’t have a physical location and are making food out of the Catalyst Kitchen there. In the past, they’ve featured baked goods, tamales and enchiladas, Freidhof-Rodgers said.

Mercado hosted a webinar with the local health department in educating the public “that no one has become sick from Covid via food,” she said. “We want all these restaurants to be around when all this is over, so we want to show them support, and keep those local places going.”

St. John’s also is giving away face masks on Fridays. “We know Covid is affecting minority communities more than other sectors of the community,” Friedhof-Rodgers said, noting they’ve given out about 200 masks, while also asking for monetary and fabric donations.

On Wednesdays, Mercado also offers a “Cash Mob” at a Latino restaurant in the area, where customers can enjoy discounts and pick up food curbside. On April 29 was D’Lua Pancake & Burrito House, Moline, and April 22 was Coya’s Café, Moline.

While Mercado’s outdoor market hoped to open May 22, Illinois Gov. J.B. Pritzker has a stay-at-home order in place through May 30. 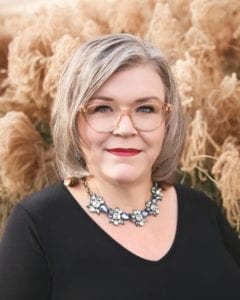 Illinois has the fourth-highest number of Covid cases of all states in the country (50,355 as of April 30), with 2,221 reported deaths (including nine in Rock Island County).

“We will work with whatever the governor decides,” Friedhof-Rodgers said. “We’ve heard it’s a possibility that summer outdoor events might not be able to happen. We’ll come back bigger and better next summer if we have to.”

“We’ll make that happen when it’s safe to do so. It’s a little different in Illinois (versus Iowa),” she added. “I think Gov. Pritzker is more cautious and conservative. We’re just staying in tune with what he decides.”

For more information, visit mercadoonfifth.org, and to donate to the building project, go to https://bit.ly/3bSzKBw.

A Spanish language version of this story is available here on QuadCities.com.

Jonathan Turner
Jonathan Turner has been covering the Quad-Cities arts scene for 25 years, first as a reporter with the Dispatch and Rock Island Argus, and then as a reporter with the Quad City Times. Jonathan is also an accomplished actor and musician who has been seen frequently on local theater stages, including the Bucktown Revue and Black Box Theatre.
See More Articles From Jonathan Turner
Tagged: local eventslocal marketsMelissa Freidhof-RodgersMercado on FifthMolineoutdoor activitiesoutdoor markets