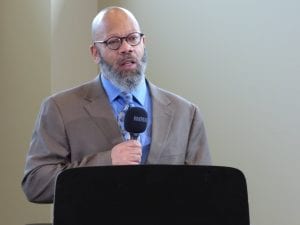 the late civil-rights leader (who was assassinated in 1968) and how far the nation still has to go to achieve his dream of peace, unity and justice.

MLK Center executive director Jerry Jones noted at the outset that theme of the service was King’s quote, “Nothing in all the world is more dangerous than sincere ignorance and conscientious stupidity,” A main mission of the event – held on the federal holiday recognizing King’s birthday – is to honor excellence in our own community.

Janet Lockhart-Johnson announced the scholarship named for her father (M.L. Lockhart), the first director of the King Center.

It was awarded to JaRaya Carr, a senior at Rock Island High School, who has a 3.9 GPA. A student ambassador, she’s a member of National Honor Society, French Club, and a volunteer. JaRaya’s goal is to attend university and earn degree in nursing and work in a children’s hospital, with a long-term goal to be a plastic surgeon.

“I hope to reach my goal of becoming a nurse so that I can come back to help my community,” she wrote. “I want to spread my black girl magic around the world with my medical skills.” 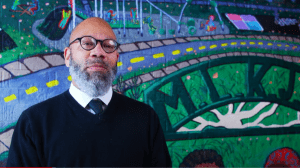 Student Kyla Nephew recited a poem she wrote around that Dr. King quote.

“We have to fight for what is right. Martin Luther King knew our future is bright, not with violence, but with words, as he would have preferred,” she said.

“We need to take action to make our world tame…I’m tired of this madness from my skin having blackness. It fills me with sadness.” 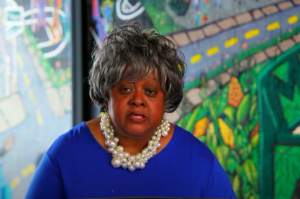 “Any race can run the same race,” she said. “You can help; it takes more than one man to make equality.” Jones presented Kyla with a 2021 Youth Expression Award.

“We want to build a strong workforce and create opportunities for our community to grow, by making sure we have a qualified and skilled workforce,” she said. “Our partnership with the King Center is critical, in that it opens up doors to so many people. We’re so proud to have been partnered for 15 years, and we continue to look for opportunities to grow that partnership.”

Pastor Earlye Julien, of Living Water Christian Center, Moline, pre-recorded her keynote speech for Monday’s event, recalling memories of when she was a young girl, attending similar services to honor Dr. King, and their messages of love, tenderness and affection.

“As we gather in thanksgiving and remembrance for the life and legacy of Rev. Dr. Martin Luther King, Jr., we pay homage to his suffering and his sacrifice,” Julien said. “We show gratitude for his life, his legacy, his leadership and his inspiring words and actions that still inspire us and impact us today.”

King had a vision of hope not yet realized, because equal rights contained in the Constitution and Declaration of Independence were not true 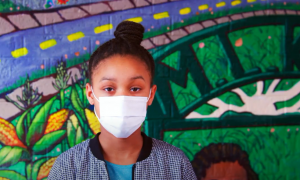 for African-Americans and other people of color, she said.

“Sadly, the vision has still not yet been actualized to its fullest intent,” Julien said. “Dr. King urged Americans to make real those promises of democracy and he insisted there be change. The difficulty, however, was the longstanding, deeply rooted, and flawed belief system. Dr. King stated, the tragic race relations we’ve seen in this country were perpetuated not merely by human badness but also by spiritual and intellectual human blindness.”

“The history of this country reveals a download of injustice, prejudice, bigotry, supremacy, and fear into its oppressors, and a download of distrust, suspicion, skepticism, fear and hopelessness into those who are oppressed,” she said.

Julien said America is in need of “a hard reset” to erase those flawed belief systems.

“We do it the same way Martin Luther King accomplished his many triumphs,” she said. “We must continue to dream. We have to construct a vision for a better America – a more equitable, inclusive America.”

One of the most powerful rituals any American citizen can perform is the Pledge of Allegiance, Julien said. The picture of unity in this nation is one of people of differing backgrounds complementing one another, she said, “working together for the good of everyone, to live in peace.” 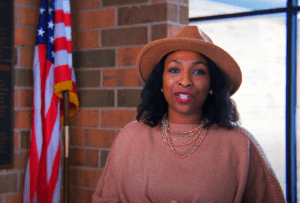 “There is power in unity, so it’s imperative we promote unity instead of contributing to divisiveness,” Julien said. “Though we are all a beautiful aggregation of people of numerous cultures, races, ethnicities, abilities and other human characteristics, we are one nation, operating in the spirit of unity.”

“Love is the law of liberty,” she said. “True freedom begins in the heart. Dr. King asserted there will be no permanent solution to the race problem until we develop capacity to love our enemies. Love motivates us to treat others how we treat ourselves. We must love not only with our hearts, but we must love according to knowledge as well.”

Truly working as one nation

The Pledge of Allegiance also calls us to be indivisible, as one nation under God, Julien noted.

“This has been a very challenging time in our nation,” she said. “Most all of us have allowed ourselves to be divided – by anger, despair, fear, other emotions.”

“We can only fulfill the vision of a great America if we are united,” Julien said. Dr. King said, “Injustice anywhere is a threat to justice everywhere.” 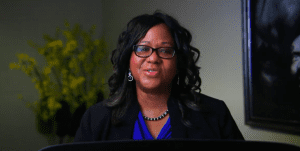 Today, there remain persistent inequalities based on race, ethnicity and other characteristics, the pastor said.

She cited her family being greeted by three police cars responding to “suspicious activity.” “We had no idea tossing a football around was suspicious activity,” Julien said. “Even though there other children playing in the neighborhood, my children were ones who were detained and questioned. And my boys were only 7 and 10 years old at the time. America has not yet reconciled its faulty thinking and fear of differences,” she said.

Injustices stem directly from “sincere ignorance and conscientious stupidity,” she said, quoting King. They perpetuate racism; instead, we should focus on empowering people, businesses and other organizations to advance not only diversity, equity and inclusion, but also healing and reconciliation, Julien said.

“Allow Dr. King’s great legacy to not only live on as a memory of great things past, but allow it to become a guiding vision for things to come,” she said. The King Center inspires greatness through community building, education and service.

“The vision is a thriving, beloved community rooted in justice, equity and respect for one another,” Julien said. “That dream has not yet been actualized. I urge you, I beseech you – make this dream your dream.”

She recommended volunteering, donating time and money, engaging in a partnership and support causes and groups like the King Center, rooted in a vision of equity. “Justice is a shared responsibility – whether due to sincere ignorance or conscientious stupidity, there can be no 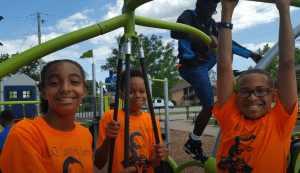 Pictures of King Center students were shown at the end of Monday’s video program.

justice for all when the convictions and actions of some in America regarding justice, show that what they really mean by justice is ‘just us’.”

Liberty and justice belongs to all people, Julien said, again quoting from the Pledge of Allegiance.

Honoring a citizen who personifies the dream

Jones noted the King Day service every year honors a Rock Island citizen who best exemplifies the dream of Dr. King. On Monday, that was Kai Swanson, a Rock Island native who works as special assistant to Augustana College president Steve Bahls.

The “I Have a Dream” award was presented by Kai’s wife, Rock Island Ald. Jenni Swanson. She quoted from King’s famous Aug. 28, 1963 speech, during the March on Washington.

“His work in our community helps to lift others, to challenge others to do better and to be their best,” she said of Kai. “To not turn away from difficult conversations, but address them head-on, to effect change.”

“Kai is constantly helping people in the community,” Jenni said. “He freely gives his time to support organizations as a board member. He 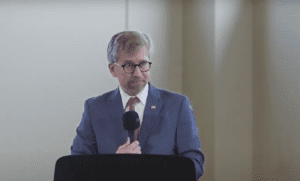 Kai Swanson, who received the “I Have a Dream” Award, was overwhelmed with the honor.

believes passionately in people, our community, and especially Rock Island. I have never met a kinder person than Kai.”

They met in 2009 while they were volunteering for an event. “He was humble, gracious and nice,” Jenni said. “The 12 years I have known Kai, I have seen him give compassion to those who were hurting. I’ve seen him spend time with those who needed comfort.”

“He makes the world a better place,” she said. “He makes people want to be better people. That’s the type of person Kai is.”

“I am overwhelmed,” a stunned Kai said in response. “To my friend and hero Jerry, if you had some complicity in this, I will never forgive you.”

“My first response is, I don’t deserve this,” he said. “I’m overwhelmed with pride and gratitude. I first volunteered at the King Center when I was in college.” 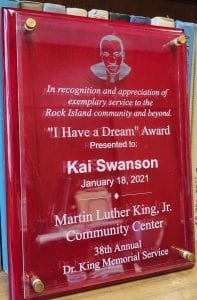 The King Center award given to Kai Swanson is in “recognition and appreciation of exemplary service to the Rock Island community and beyond.”

“I don’t deserve this, but I’ll accept it on behalf of my teachers,” Kai said. “I thank the King Center for being here, and all the people for volunteering to keep it alive – not just alive, but vibrant and thriving.”

“I am so blessed to have grown up in a city like Rock Island,” he said, fighting back tears. “I’m just so proud to be from Rock Island and I cannot think of another award I have received that means more to me than this award, and I thank you for that.”

Near the end of the event, Tia Edwards, chair of the King Center board, said:

“Here at the King Center, our mission to inspire greatness in the Quad-Cities through community building, education and service, with a vision of a thriving community rooted in justice, equity and respect for one another, we hope you have been inspired by seeing the greatness in our youth essay contest winner, our scholarship recipients, our musical selections, our 911 call to action by our keynote speaker and our ‘I Have a Dream’ award recipient – all from our community.”

Kai Swanson also recited a closing prayer, quoting Dr. King’s March 25, 1965 phrase that was the event theme, which he spoke on the steps of the Alabama State Capitol in Montgomery.

“We thank you that on that day, no one stormed that Capitol, nor incited, nor enabled, nor encouraged others to do so,” Swanson said. “Gracious God, we thank you for the countless ways you have laid bare for all to see – structural inequities and systemic racism that continue to infect our nation more insidiously and pervasively than Covid could ever hope to do.

“We beg forgiveness for our sincere ignorance and conscientious stupidity,” he said. “We have in the past dismissed the clean and present signs that you have given us.  But now O God, we thank you, in your boundless compassion for and indefatigable patience in us, your children, you have given us all we need in order to know better. And whether we have known better for years or weeks or mere days, empower us now to do better.

“As we leave here, grant us the courage to brush away our own sincere ignorance – that we might live in the light you so abundantly provide,” Swanson said.

You can see the entire MLK Center service here on YouTube.