To recognize and celebrate the achievements of women in the industry, Women in Construction Week was started as a national campaign held annually during the first full week in March. The goal: to promote the fearless females who have chosen the trades as a career path and emphasize the growing role of women in the construction industry.

According to the National Association of Women in Construction (NAWIC), women make up 9.1 percent of the U.S. construction workforce. This figure encompasses all positions held by women, including executive, administrative and other office positions. A much smaller percentage — just 3.4 percent, according to Construction Dive — is involved in field work across the trades.

Plumbers and Pipefitters Local Union 25 in Rock Island counts just a handful of women among its membership, but hopes to continue to recruit more in the coming years.

“Nationally, the construction industry as a whole is experiencing a labor shortage, but the demand for new construction and building maintenance just keeps growing,” said Matt Lienen, Local 25 Business Manager. “The job opportunities for plumbers and pipefitters are endless, and women are encouraged to apply for our apprenticeship program to learn the skills needed to help move this industry forward.”

Aside from job availability, a career in the skilled trades is high-paying and full of variety. Just ask journeywoman Amelia Kellner, who went to college and was working toward a Business/Marketing degree before she discovered Local Union 25.

“I’m making a whole lot more money than I would have with that degree, and I love my job,” Kellner said. “One day I may be tube bending, and the next I’m welding. Some projects may take a few days, while some may last two years — and I work at many different locations. There’s so much diversity and opportunity in the work. I love it!”

Second-year apprentice Kirsten Heuser couldn’t be happier about her choice to go into the trades — especially as she sees friends struggling to pay off student loan debt while she’s debt-free and making great money. She’s also excited about the many opportunities available to her in the industry. 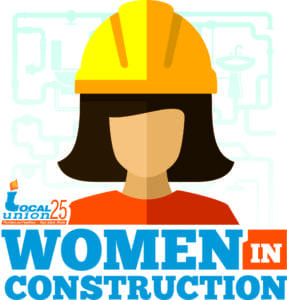 “A lot of people, including myself, go into a trade thinking it’s pretty cut-and-dried. But being a plumber doesn’t end with just being a plumber,” Kirsten said. “There’s a lot of room for advancement to become an inspector or an educator or a leader at the union hall. Continuing education and looking into those options is something everyone entering the trades should look into.”

Patti McFate, who started her career in plumbing and pipefitting nearly 30 years ago, has seen a lot of positive change in the industry throughout three decades.

“When I started, I would have to try to find cranes for the heavy lifting, but now the work is much less demanding,” McFate said. “Technology has changed how things are done. There’s more equipment to do the hard stuff, and less physical labor. If you work smarter, not harder, the work is not physically demanding.”

McFate, who married a pipefitter she met on the job, also has two sons who have followed their parents into the “family business.”

“This has been a great career for my whole family,” McFate said. “Now, I can retire with my pension at just 55, and I’m still young enough to have a second career if I want it. It’s been a challenge with great rewards.”

With expectations of growth in the plumbing and pipefitting industry at 14 percent through 2028, there is plenty of opportunity available for men and women who are considering a career in the skilled trades.

Sean Leary
Sean Leary is an author, director, artist, musician, producer and entrepreneur who has been writing professionally since debuting at age 11 in the pages of the Comics Buyers Guide. An honors graduate of the University of Southern California masters program, he has written over 50 books including the best-sellers The Arimathean, Every Number is Lucky to Someone and We Are All Characters.
See More Articles From Sean Leary
Advertisement
Tagged: Kirsten Heuserlocal businesslocal constructionlocal employmentlocal labor unionsLocal Union 25local unionsMatt LienenPatti McFateRock Islandwomen in construction week