Moline-based Living Proof Exhibit hosts Creative Sessions each month with a variety of community partners at various locations in the region and has one coming up in Muscatine, for the first time in a long time. 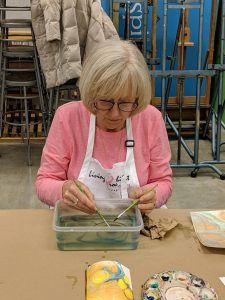 To date, Living Proof Exhibit has provided free Creative Sessions to more than 2,400 participants in the Quad-Cities and Muscatine. The art sessions are free of charge and open to anyone impacted by cancer of any artistic skill level.

Both are hybrid sessions, where they have spots for in-person participants and for virtual attendees through Zoom. The Muscatine session is limited to 10 people, who will be socially distanced and masks are encouraged, but not required.

​Other upcoming sessions are:

Those last two will be at the Gilda’s Moline clubhouse at UnityPoint – Trinity’s 7th Street campus off John Deere Road. 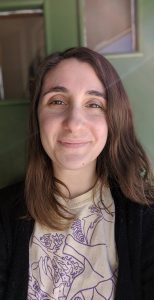 “They’ve hosted our creative sessions and our exhibition, and the creative sessions, we provide those free of charge to anyone impacted by cancer, so that can be patients or survivors, their family, oncology nurses, basically anyone touched by cancer and those are meant to provide sort of an outlet, or a way to learn a new skill, that can help someone cope with the stress of cancer,” she said Monday.

Because of Covid, most all LPE creative sessions were done by Zoom for 2020, and many people have participated that way this year so far.

“I think there were a few that were in person, but spread out and outside,” Kirkbride said. “But we didn’t have really the chance to hold classes in Muscatine in 2020. So we’re excited to be back there. But with things opening back up, we are still offering sections virtually. We’re doing a sort of hybrid thing where you can either come in person or you can join over Zoom or Facebook Live.”

LPE provides materials and art supplies for people, and if done virtually, they can be picked up at their office, or at Muscatine Art Center.

People can register for free up until noon the day of the session for in-person, or the day before for virtual participants, so they have time to come pick up their supplies. A bilingual interactive song session at Muscatine Art Center planned for May 13 had to be postponed for later this summer, Kirkbride said.

“Unfortunately, that one we had to postpone do just some unforeseen circumstances but we’re hoping to get that one rescheduled for the summer sometime,” she said. “That one, our instructor will be joining us virtually from Portland and she’ll just be leading us through some folk songs in both English and Spanish.”

As more people get vaccinated, the attendance at creative sessions is increasing.

“I do think that they’re that the vaccinations will make a difference in in-person  attendance,” Kirkbride said. “We had six people at the paper-making session this month and we were still masked and socially distanced, just in case there was someone that didn’t have a vaccine, 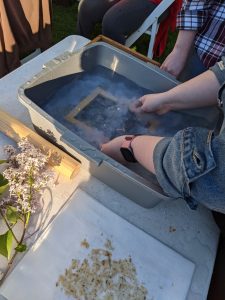 A participant in a Living Proof creative art session.

but I do think people are starting to feel more comfortable.”

Even if people don’t have artistic ability, they can take pride and comfort in the simple, low-stress creative sessions, she said.

“Like you’re not trying to create some elaborate vase or like an oil painting, that should be hung in a museum,” Kirkbride said. “You’re just learning something that can help you kind of detach from the stressful moments and you can just focus on creating — even if you think you’re not very good or you’ve never an art class before that. That really doesn’t matter if you can just zone in on what you’re creating.”

Often, participants also come in with a friend or family member, to do the activity together.

“I think that people will come alone, but a lot of times they’ll come with a friend who has supported them on their journey, or we had a family in March for a watercolor session — it was a mother, a son and then grandma — they were all together and it was it was really nice to see a generational support system there,” she said.

Since 2010, LPE has provided therapeutic benefits of the arts to those impacted by cancer, including patients, survivors, families and caregivers. In addition to creative sessions, it offers exhibitions of art created by cancer survivors each year, permanent rotating exhibitions at the cancer centers, art-to-go projects for patients and their families, as well as using Beam Pro technology to share the exhibitions at the Figge Art Museum with patients receiving treatment at the cancer centers. 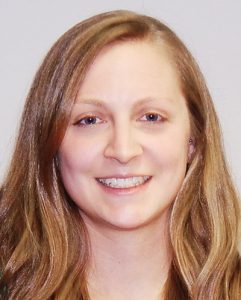 “We have really enjoyed partnering with Living Proof over the last few years. And it’s brought a variety of types of classes as well as different artists to the Muscatine area,” she said. “So it’s kind of drawing in a different crowd for us as well.”

“It’s very therapeutic for some people and I think that’s exactly what it aims to be,” Loos said. “It’s almost a therapy session for different people who have been impacted by cancer. We definitely enjoy the partnership and we hope that it can continue to grow to more classes each year and all kinds of classes.”

The sessions can help spark a new interest in the art form, or serve artistic veterans who have done it for years, Loos said.

“I definitely believe the sessions give people enough time to really kind of dig into what they’re doing in that session and the artists and the people they’ve found to lead them are wonderful instructors,” she said.

“We could have people who have been doing this kind of stuff forever. And they just want to come and do it with other people,” Loos said. “So we get people of all different kind of skill levels and I absolutely think after a session that somebody might pick this up as a hobby, especially the one coming up here in June.”

The Muscatine museum hosted LPE’s “A Visualization of Hope” art exhibit by cancer survivors within a 200-mile radius from Sept. 15-Nov. 3, 2019.

Juan Carlos Mendoza, a Mexican-American singer, is a Muscatine native and last fall he filmed two solo programs in the 1921 music room in the Muscatine mansion at 1314 Mulberry Ave., as a partnership with LPE. The first 20-minute program — accompanied by Jessica Monnier on the piano – premiered Nov. 13 on Muscatine Access Channel Nine.

A second concert aired on Dec. 4. Three days after each concert, the videos were made available on the YouTube channels for both Living Proof Exhibit and Channel Nine, as well as www.muscatineartcenter.org.

Meyer Landscape & Design and Garden Center in Moline will host a benefit for LPE and celebrate its mission of using the healing power of the arts to help people touched by cancer on Saturday, June 12 from 9 a.m. to 4 p.m. A portion of sales from June 7 to June 12 will be donated to Living Proof Exhibit.