Playcrafters Barn Theatre is excited to welcome the incredibly funny AND incredibly talented G.I.T. Improv troupe to their stage on April 23rd at 7 PM as they will be helping the community theatre raise money for their “Raise the Roof” campaign!

Playcrafters’ roof began failing seriously while we shut down in 2020. It needs to be replaced, and as you can imagine, replacing a gambrel roof of this size is a very expensive project. Insurance will only cover replacing less than half the roof (parts damaged by winds in 2020); they have raised a few thousand beyond that amount but, when reopened mid-year in 2021, it was a struggle just to put on shows, much less mount a major capital campaign.

This is where G.I.T Improv comes in! They have generously offered to do a fundraiser show to help raise money for their “Raise the Roof” campaign! Tickets are only $10 and all the proceeds will go to fixing the roof so we can keep Playcrafters open! All ages welcome and you can buy tickets online at Playcrafters.com or they will be for sale at the door.

The board and its members hope to see you at Playcrafters Barn Theatre on April 23rd for a night full of laughs and live entertainment at its finest, with the G.I.T. Improv troupe! 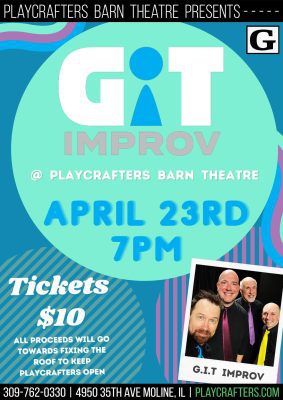