‘Anybody’s Blues’, the first feature-length film from Farmer Klink Productions, the brainchild of former Quad City actor/director Ian Klink, will debut on July 1 in The Village of East Davenport.

Full of tense emotions, un-ending spirit, and plenty of laughs, this film stars Justin Marxen and Jessica Taylor and features many QC local talents including Circa ‘21’s Savannah Bay Strandin.

‘Anybody’s Blues’ was shot in and around the Quad Cities in the summer of 2020 featuring a local cast and crew.

The premier will be held at The Village Theatre in Davenport on Friday, July 1, 2022, at 7pm. A $5 donation is suggested at the door. 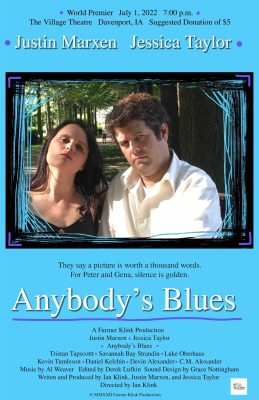