Rein Razer participated as a guest performer at the last burlesque show at the Village Theatre – a March 14 gig from the new Crystal Crown Cabaret – and the Rock Islander is back organizing a special return, Friday, July 24 at 8 p.m. The theater is at 2113 E. 11th St., Village of East Davenport. 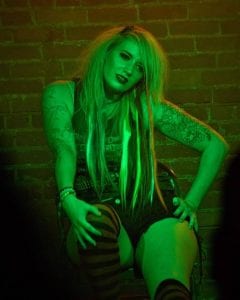 Rein Razer is a former member of Moonshine Misfits.

Rein Razer’s Court of Royalty was originally intended to be an online-only show, to help out her community performers, as most shows and events have been canceled due to Covid. Now that things are beginning to open back up, Razer has teamed up with the Village Theatre to produce a showcase that can house a small audience with safety at the forefront, as well as be viewed from the safety and comfort of home.

Tickets will be $15 – to see in person or online, available at eventbrite.com – and in-person seating will be limited to 36 in the theater, at tables spaced six feet apart. As they cannot mix parties at tables, reservations can only be made in groups of four to six, and masks are required to be worn by all audience members and Village Theatre staff.

“I got the idea from how the Speakeasy was doing their booking for shows,” Razer said this week of the Rock Island space next to Circa ’21 Dinner Playhouse, which hosts burlesque and drag shows, and can seat up to 50 under Illinois guidelines.

After the March 14 Village Theatre show, Razer was scheduled the following weekend to be in the Bottoms Up School of Witchcraft and Nudity, at the Circa ’21 Speakeasy, which got cancelled. Bottoms Up did a couple virtual shows in June, including a Black Lives Matter show, with performers of color, from the Speakeasy. 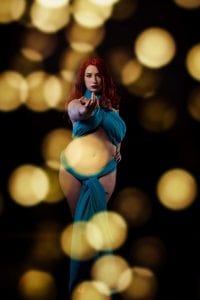 The royal Rein will hold court on July 24. 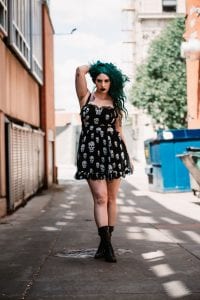 Razer also did a couple virtual shows during the shutdown, with troupes from Ohio and South Dakota. “I got to see how they operate, and really liked the idea. I wanted to create something similar for the Quad-Cities, with one representative from each local troupe,” she said.

Razer did home-based routines for Sex Kitten Purrlesque, in Columbus, Ohio, and Veaux Devil Cabaret in Sioux Falls, S.D. They included a live-stream chat among performers, and the routines had to be PG-13 in limiting how much was revealed, she noted.

“It was definitely different to perform to an audience that was online,” Razer said. “It was a really good experience, excited to see many more entertainers getting creative, when people can’t go out.”

“I thought it would be more awkward than it actually was,” she said. “It was almost like doing a dress rehearsal by myself at home, running through the routine. You could see the positive comments on social media. That was cool, definitely not the same as the roar of an audience by any means. I got to meet and network with some really cool performers I never would have met otherwise.”

Razer will be going to South Dakota to perform live with the troupe on Aug. 7.

She’s a former member of Moonshine Misfits, which she left in early February after about 18 months. “I have hopes to be joining a troupe in the future,” she said. “I’m enjoying my time learning and growing, performing as an independent.” 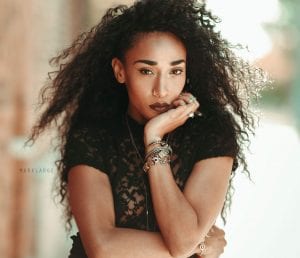 The Court of Royalty will feature Mac DeVille of Bottoms Up Quad City Burlesque, Betsey Beau Peep of Crystal Crown, and Mary Quite Contrary, who debuted her new burlesque troupe in early March at Moline’s Spotlight Theatre. The Village date also features performers from Manscape Burlesque (an all-male group), Moonshine Misfits, Joshua Kahn (“The Ghost of Vaudeville”) from Bottoms Up, and a couple other surprises.

“It sounds kind of silly, but I refer to myself as a baby queen, the baby burlesque dragon, and refer to everyone in the scene as kings and queens,” Razer said, noting her hashtag is “Long May She Rein.” “My goal with the show is to come up with the royalty theme, utilize that, remind each other we are kings and queens here. We are all on equal footing, come together to make their mark.”

Rein (as a burlesque character) is “very sassy, she’s sensual, she’s confident, she’s not afraid to tell it like it is,” Razer said. “She is a queen, she holds her head high, takes no shit,” she said. “I want her to be seen as a good, strong female, an empowering leader.”

“I have missed performing in front of a live audience tremendously,” Mary Francis (Mary Quite Contrary) said Wednesday. “Since the beginning of 2020, I have only performed live three times. Before Covid, I performed live umpteen times each month. 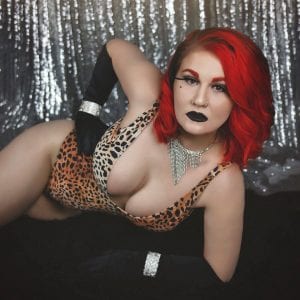 Mary Quite Contrary’s House of Burlesque started early this year.

“To say I am looking forward to this show is an understatement,” she said. “Having theaters and shows open back up is helping people feel comfortable that life is resuming again. To be able to get out of the house and see a show physically is thrilling right now. It is still scary out there, but everyone involved with this production is taking the utmost precautions and we are in constant communication with one another. It is going to be incredible to be on stage again and to feel safe about it.”

Of the growing number of local burlesque troupes, Razer said: “We have a pretty booming entertainment scene. We have a lot of very creative individuals in our performance scene. One of the things I really like, people are really driven in our community. People have big goals and aspirations, and I want to really do something with them. I’m a firm believer that there is room for everyone to be successful. 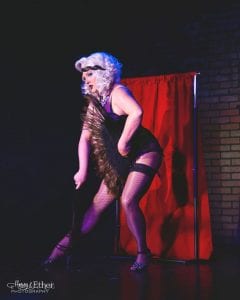 “Anything I can do on my end, to unify our community, offering a stage to perform, I will happily do,” she said.

They can offer this live option at the Village, since Iowa “is a lot more lenient in Covid restrictions than other states,” Razer said. “I feel very firm in wanting to follow Covid precautions. Tables will be six feet apart; a couple of performers are going to be wearing masks while performing. I want this opportunity to bring entertainment in, but not forget we still have this global health crisis going on. We’re adjusting to a new normal.”

She doesn’t know of future burlesque shows at the Village, but she hopes there will be more.

The Speakeasy, at 1818 3rd Ave., Rock Island, is back to hosting a slate of shows, including a sold-out Viva La Divas drag show July 16 (returning Aug. 21 and Sept. 18); a Laugh Hard comedy show July 24; Shots and Giggles improv show July 25, and a new Thursday Night Live – which features Bootleggers and Circa favorites performing July 23, 30, Aug. 6, 13 and 20 at 7 p.m. Bottoms Up is scheduled to do a roulette improv show on Aug. 15. For more information, visit thecirca21speakeasy.com.