Crazy, Chaotic “Peter and the Starcatcher” Soars at Spotlight

Rick Elice’s Broadway hit “Peter and the Starcatcher is A LOT – a lot of characters (allegedly 100), a lot of story (with intermission, 160 minutes), a lot of action, sound and fury, and in its ADD-fueled, childlike soul, a heck of a lot of fun.

Though you couldn’t pay me enough to summarize its crazy, complicated, silly plot, the new production at the Spotlight Theatre, 1800 7th Ave., Moline, is an exuberant, enthusiastic riot. Fitting snugly into its stellar reputation for family-friendly shows, the boisterous (and at times poignant) comedy with lots of music certainly shines with a starry cast. 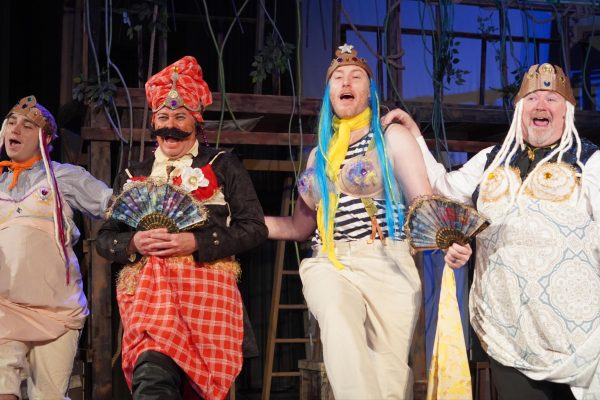 In a creative backstory to “Peter Pan,” the wild “Peter and the Starcatcher” posits a young orphan (who hates grownups and longs to fly) and his two best mates  shipped off from Victorian England (circa 1885) to a distant island ruled by the evil King Zarboff. They know nothing of the mysterious trunk in the captain’s cabin, which contains a precious, otherworldly cargo.

At sea, the boys are discovered by a precocious young girl named Molly (who will become mother to Wendy), a Starcatcher-in-training who realizes that the trunk’s precious cargo is “starstuff,” a celestial substance so powerful that it must never fall into the wrong hands. When the ship is taken over by pirates – led by the fearsome Black Stache (who will become Captain Hook), a villain determined to claim the trunk and its treasure for his own – the journey quickly becomes a thrilling adventure. 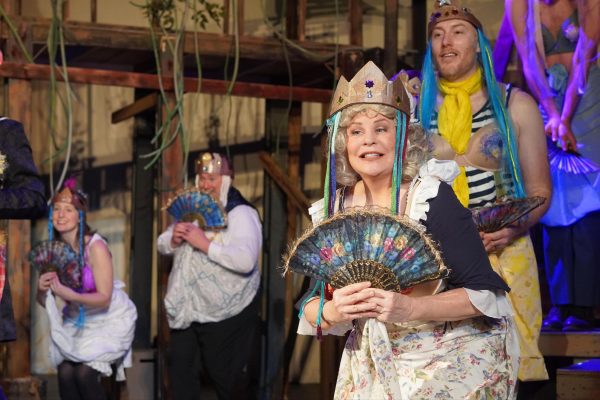 Nancy Teerlinck in “Peter and the Starcatcher.”

The show opened on Broadway in 2012 and the first local production was in June 2017, at the former QC Theatre Workshop in Davenport. While entertaining, the former version (with a cast of 10) was a bit like trying to dance in a phone booth. The assured, full-throttle Spotlight version is like seeing as black-and-white film explode into color – here there are 19 actors, and they have lots of room in which to roam, including a ramshackle, two-level wooden set.

The uber-talented Mike Schulz (who’s Black Stache at Spotlight) indelibly played the same role five years ago, and is the clear highlight at Spotlight, over the top in all the best ways. Heavily made up and heavily hirsute, the flamboyant and effeminate Black Stache is ruthless but toothless – a hilarious, ridiculous baddie who actually wouldn’t hurt a fly. He also has some of the best lines of the show, often modern commentary, taking us way out of its Victorian setting.

Schulz is characteristically mesmerizing, dominating the stage whenever he’s on it, and a consistent joy to watch. He also must be unique among theater critics who can perform at such a professionally potent level (having seen so much great work on stage and screen, he definitely knows what works) – you’ve never heard of Frank Rich or Ben Brantley on the boards, have you?

“Peter and the Starcatcher” (which unfortunately drags at times) is best appreciated as a string of comic set pieces, rather than a concise, convincing dramatic narrative – though it does build to a tremendously satisfying climax. Towards that end is my favorite scene, where Schulz shows how Black Stache comes to need that iconic Hook, after failing again to find the starstuff in a trunk. It’s priceless, hysterical stuff. The big mermaid musical number is also a rambunctious, rollicking standout. 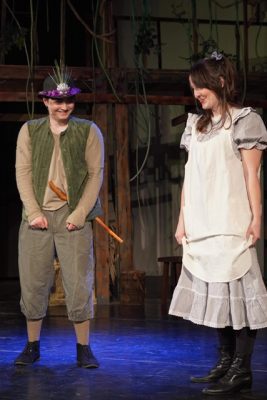 Jacob Johnson as Peter and Amelia Fischer as Molly in the Spotlight production.

The new show is passionately directed by Whitney Fahner, who recently moved to the Q-C from Atlanta, Ga., where she has been teaching and directing for a decade. At several points, she lets the cast be too passionate, as many of the lines delivered by yelling, which can get tiresome and pushes the amplification system too hard. There’s a great sound effect with the threatening crocodile’s roar, but we miss any sound of splashing water, when some characters get submerged at front of the stage (behind a fence). 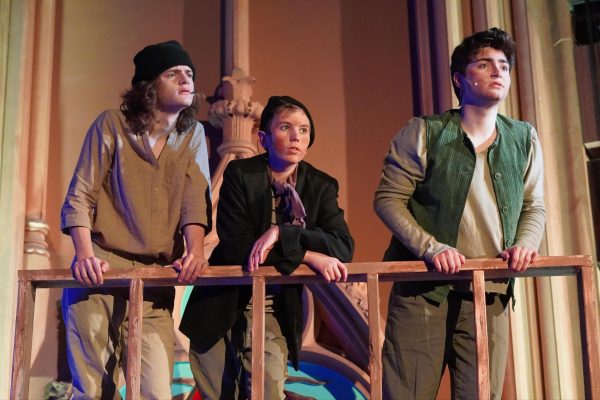 Charles Budan, left, Henrick Senne, and Jacob Johnson in “Peter and the Starcatcher.”

Two new features also help make “Peter” a memorable production. The Spotlight has put small tables (with small electric candles) on the floor, to facilitate patrons bringing their food and beverages inside. The baking wizard Becca Johnson is making mermaid cheesecake squares for the show and the stylish Blueprint Bar sells delectable drinks.

The orchestra “pit” is up high here – way up in a third-floor loft at the back of the theater. Music director Katie Griswold (who plays some percussion) leads Mason Moss on piano, and Christine Rogers and Haley Tromblee on percussion. 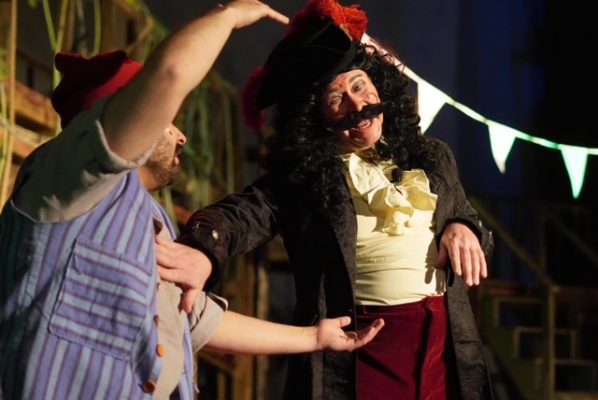