The coronavirus crisis continues to play havoc with outdoor music events in the Quad-Cities, as more summer series are being canceled, while others optimistically remain on the 2020 calendar.

Given the ongoing uncertainty due to the Covid-19 pandemic surrounding when exactly public gatherings will once again be permitted, and out of concern for the health, safety and well-being of the Quad-Cities community, Moline Centre has made the difficult decision to suspend the 2020 Bass Street Landing Thursday Night Summer Concert Series until further notice. 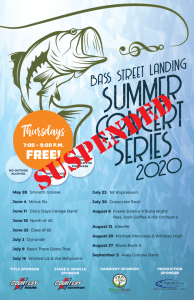 “This decision did not come easily, as it impacts many people in our community, including our dedicated staff, artists, presenting partners, community partners, vendors, sponsors, and the thousands of friends, families and neighbors who enjoy free Thursday Night Concert Series at the Bass Street Landing every summer,” Moline Centre posted this week on Facebook.

The series planned to launch May 28 with Smoooth Groove.

Moline Centre will continue to closely monitor the state and federal Covid-19 pandemic safety mandates/recommendations. “When the opportunity can safely present itself know, that we will reactivate/makeup as many of these concert dates as possible,” it said.

In Davenport, with similar concern for public health and the uncertainty regarding future distancing guidelines, the Riverfront Improvement Commission has cancelled Music on the River Summer Concert Series 2020 at LeClaire Park. Like many others, it plans to return in 2021.

Murphy Park at The Bend in East Moline – which had its first Wednesday night concert series in 2019, starting in late May – will not have any events this summer.

The Bettendorf Bill Bowe Bandshell concerts have not been canceled, and are scheduled to run June 5 to July 31. Live @ Five at the River Music Experience courtyard in downtown Davenport is canceled for June, and up in the air the rest of the summer. 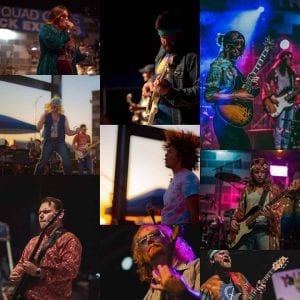 Highlights from concerts at Murphy Park.

“We all love the Bandshell and love the 4th of July, but the mighty Mississippi River wouldn’t let us have that cake and eat it, too,” he wrote last month at mvbs.org. “After the challenge of planning around floods, we are now challenged by an ongoing pandemic with an unknown and largely unpredictable endpoint. As we monitor the news, the potential for a second wave or peak later this year is very real, and could render our 35th-anniversary fest a non-event in 2020, if large-group gatherings remain discouraged through late summer into fall.

“That said, we will continue to plan for September with our fingers crossed. We know that many of our Fest fans travel great distances from around the country and need some certainty in planning,” Clevenstine wrote.

“We have established our target dates, locked in the Park, and are jostling with other event organizers for top tier talent, but if “community spread” remains an issue as September approaches we will not put you at risk. The Mississippi Valley Blues Society puts your safety and well-being, and that of our artists, ahead of tradition and we would prefer to see all of you next year, healthy and happy at the end of this long coronavirus tunnel, versus risking your health in a premature celebration.” 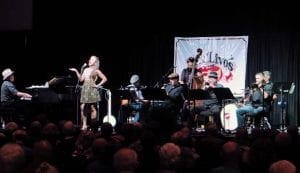 It’s still the intent of the Bix Beiderbecke Memorial Jazz Society to hold the 49th-annual Bix Jazz Festival on July 30, 31 and Aug. 1 at the Rhythm City Casino’s Events Center, Davenport.

The Mississippi Valley Fair is still scheduled for Aug. 4-9, including a planned Aug. 5 show by Keith Urban and Aug. 8 with Pitbull. 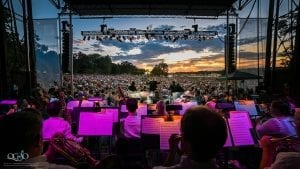 And the Quad City Symphony Orchestra still plans to have its Aug. 15 Riverfront Pops, with the music of Fleetwood Mac, on Arsenal Island. The QCSO did cancel its annual Volunteers for Symphony Second Fiddle Sale June 4-6.

The Schwiebert Park concert series in Rock Island is scheduled for Aug. 13 to Oct. 1, as the Thursday Night Groove Concert Series, hosted by Rock Island Parks and Recreation.