EXTRA! EXTRA! READ ALL ABOUT IT!

Countryside Community Theatre will continue their 39th season this weekend with the second weekend of the critically-acclaimed Disney’s Newsies! 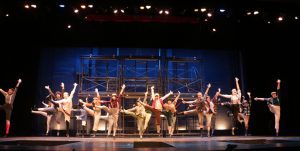 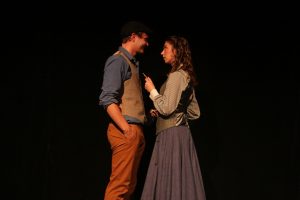 Directing and choreographing the production is professional actor Ashley Mills Becher, who is currently also performing in Circa ’21’s production of Saturday Night Fever. Ashley also works with Davenport Junior Theatre, and Lancer Productions. She will be guest directing Frozen this winter at the latter. Ashley runs the Circa ’21 educational program ‘Rising Stars’ alongside her husband, Bobby Becher.
The extraordinarily talented cast includes Wisconsin native Andrew Arevalo as Jack Kelly, Sophia Kilburg as Katherine Plummer, Chris Tracy shines in yet another villain role, as Joseph Pulitzer, Nickie Callender as Davey, and current Jr. Miss Rock Island County Fair Queen Marley Haley as Crutchie. The talented ensemble will wow you with their athletic leaps and tricks, tap dancing, and masterful anthemic singing, all done on an industrial, multi-level set inspired by the original Broadway production!
QuadCities.com critic Jonathan Turner raved about the show, and you can read his review here!
Performances are August 6th, 7th at 7 PM, and August 8th at 2 pm.
Tickets are $15 and available for purchase at the door, and at ccteldridge.booktix.com!

Sean Leary
Sean Leary is an author, director, artist, musician, producer and entrepreneur who has been writing professionally since debuting at age 11 in the pages of the Comics Buyers Guide. An honors graduate of the University of Southern California masters program, he has written over 50 books including the best-sellers The Arimathean, Every Number is Lucky to Someone and We Are All Characters.
See More Articles From Sean Leary
Advertisement
Tagged: Countryside Community TheaterEldridgelocal theaterNewsiesQuadCities theater