The economy is in shambles.

The world is a mess. 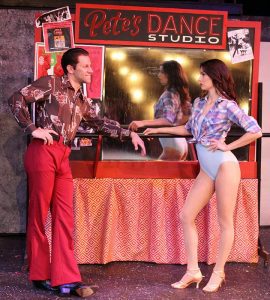 Young people feel as if they have little to no hope to achieve the American dream they’ve been promised.

And so, for many young people struggling with this realization, escapism is paramount to balancing out their lives and getting them through.

Sound familiar? It should, because it certainly describes the world today, particularly for the millenial and Gen Z generations, and, as Circa ’21’s great and gritty musical adaptation of “Saturday Night Fever” displays, there’s a fine line between the blinding dazzle of a mirror ball and the misty filters of an Instagram post.

Circa’s adaptation of the musical strikes just the right balance between the airy musical tone and the tougher mood of the story. In many ways, not just the facile parallel of its New York City setting, it reminds me of “West Side Story,” not in its overt plot but in its mixture of light and dark tones and the way the buoyant music lifts the more profound elements of the book. It’s a difficult balancing act, and I’ve seen Broadway touring productions of this show which haven’t been able to do it. It’s to the great credit of director Amy McCleary and her cast, especially fantastic lead, Justin Wolfe Smith, 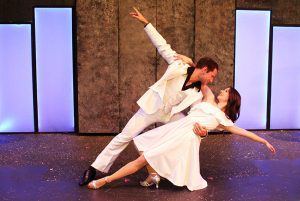 that she’s able to pull it off.

“Saturday Night Fever,” based upon the far, far darker film, is an unusual hybrid that greatly lightens up the source material while still keeping its foundation in desperation and escape. It’s a strange dichotomy that in many ways shouldn’t work due to its dissonance, but it’s in that discord between gloss and grime that it actually acts as a meta commentary on its source material through the same lens that material both highlights and lampoons.

The scene is set right from the start, as a series of voiceover narratives sets the somber scene of 1977, a year when the world, and particularly New York City, was becoming unhinged. Cleverly backing this audio is a set, dim lighting and choreographed routine reminiscent of another show imbued with the chaos of another time, again, “West Side Story.” However, while that history echos, the show’s “present” of the 1970s bears its own scars. In England, that strife birthed punk rock, which unflinchingly held a mirror up to the dysfunction. However, in the U.S., that mirror was used to snort, spray, and dance away reality within the escapist glare of disco. However, as anyone who has sought to escape the more dire constructs of reality knows, that veneer is easily corroded away by the rot beneath, and therein lies the thematic fuel of the film and this show.

Tony Manero (Justin Wolfe Smith), and his friends, Double J (Tim Canali), Gus (Derik Lawson), Bobby (Jacob Clanton), and Joey (Michael Ferlita) are little more than social detritus of the system — 19-year-olds just out of high school spat out to float in dead-end jobs to support the machine until slumping into the well-worn paths of marriage, kids, complaints and regrets, to their eventual graves. For a brief flicker 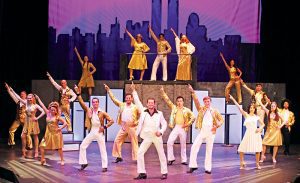 they have hope of achieving something more, and that flicker is reflected by the manic lights and glitter of the 2001: A Disco Odyssey club in their native Bay Ridge, a bridge ride away from the glimmering shores and exclusive clubs of Manhattan that may as well be thousands of miles through space.

There, they stand out as young and vital, especially Tony, who shines above all on the dance floor. He aspires to something more than the banal existence of his family (played well with sour resentment, particularly by his father, Brad Hauskins), but isn’t quite sure what. However, the one thing he has which has ever brought him any sort of recognition is his dancing, and so he clings to that desperately, hoping to build upon it, to build a bridge to something far better.

Just ahead of him on that path is Stephanie (Emily Stys), a year ahead of him in age and ambition, who’s made the trek to Manhattan but, we find, isn’t completely free of the restraints of her past. She and Tony pair off initially for a big dance competition at 2001 and end up something a little more than friends, but, more importantly, allies, giving each a partner to help them along their paths to a better life. It’s that nuance, that avoidance of the easy payoff of only a romance, that underpins the masterful 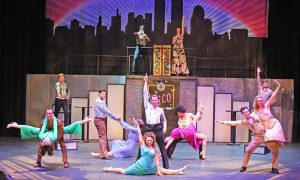 The cast of Circa 21’s “Saturday Night Fever.”

nature of the writing of “Saturday Night Fever,” where people are literally just stayin’ alive, and it’s pragmatism and ambition, rather than the prescribed paths of fantasy, which will get them through.

Both have to navigate difficulties along the way, as their compatriots succumb to pitfalls and pressures of lives, sucked down along the pathways of stupidity and inertia.

However, it’s within the midst of this harder-hitting material that we get the hope and energy of the show, brought forth by the humor and vibrance of the disco settings as well as the catchy levity of the musical numbers, most of them based upon the well-known Bee Gees soundtrack and catalog that acted as the sonic through-line of the U.S. in the last half of the ’70s. Like so much pop music, the lift and happiness of the music is tempered by the bittersweetness of the lyrics, and the costuming, choreography and lighting cues accompanying the tunes is perfect in the way it balances these dichotomies out.

Given that I’m a huge fan of the film (it reminds me a lot of one of my other cinematic favorites, “Boogie Nights”) and that I’ve been disappointed in the musical in the past, I was going into the show with tempered expectations. However, Circa ’21 did a terrific job and 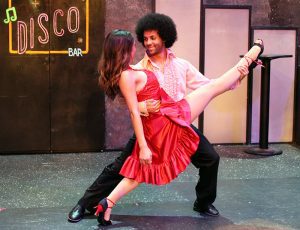 McCleary and her cast handled the material so deftly that I walked away very impressed.

The balance between the two tones was extremely well done, drifting between the pathos of Tony’s life, the tentative romance between him and Stephanie, and the brief but necessary bits of humor and goofiness thrown in to not just lampoon the disco era but to nicely lighten up the show. In particular, the many asides and goofy characters of Tristan Tapscott were brilliantly done to cut through the darkness with humor.

Canali, Lawson, Clanton and Ferlita are all great as the doofy but sincere friends, Caitie L. Moss does a fine job as the sadly struggling Annette, and as mentioned, Hauskins is solid as Tony’s resentful father.

Stys brings forth Stephanie with just the right balance of sass and naivete, trying hard to stay on the right path, make the right choices, and travel over territory for which she has no real map.

But, like Travolta before him, the star of the show is undeniably Smith. His Tony is a complex character, vulnerable and proud, aspirational yet downtrodden, clueless but ambitious, and he hits all the notes well, in addition to giving him just the right amount of likeability and charisma. It’s important in a show filled with flawed people, the protagonists among them, to want those people to succeed, and Smith helps us understand through his performance that Tony is intrinsically a good guy raised poorly in a rough environment, who just wants to find his spot in the world.

Circa’s “Saturday Night Fever” is highly recommended, not just for those folks who remember the disco era because they lived through it, but especially for a younger crowd in their twenties and thirties who will likely see themselves in it, even through the gold chains and polyester.