Home › Columns › Sean Leary › Caribou Was More Than Just A Coffee Shop, It Was A Part Of A Life Now Gone

Caribou Was More Than Just A Coffee Shop, It Was A Part Of A Life Now Gone

We’re all maps of our experiences, our lives a tapestry of our time spent. Every second, every moment of them.

Those decisions can be huge – who we decide to love, to marry, to live with.

Or they can be small – the places we frequent, the habits we hold, the culture we imbibe. 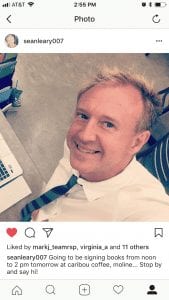 A common sight: Me posting on social media about a book signing at Caribou Coffee.

And while the closing of a coffee shop may seem small in the larger picture of things, it’s still something. Something of resonance. A bit of normalcy that echoes in some subtle nuance of a piece missing from time to time, a routine, a tiny happiness lost.

Not a week went by that Caribou wasn’t a part of my life, however small, over the past ten years.

Often, it was selling books, doing book signings and meeting new people. Some people were cool, some were weird. Some bought books. Some told me elaborate stories, just because I was someone to talk to. A few ended up being friends. Some ended up being women I dated. Some were just folks who would smile and wave as they’d walk by from time to time, and for those seconds there was something in that interaction, that compact of normalcy and civility, that brightened our day.

Just as often, and usually at the same time, I was there writing, working on new books and stories for my variety of journalistic enterprises I’ve been involved in. I’d pick up an iced coffee, or a green tea, my two go-to drinks about 95 percent of the time, and I’d sit there for hours, creating new worlds and alternate realities.

Even more often, I was there in a personal rather than professional capacity, going to BOGO (or as we called it, Laney Boggs – bonus points if you recognize the reference) from 3 to 5 p.m. with my son, Jackson, sitting on the couches, talking, and people-watching as we enjoyed a couple of delicious drinks and some good conversation.

Throughout the past eleven-plus years the coffee shop was open, it was a part of our lives. It was like my “Cheers,” a spot where the workers and regulars and I knew each other’s names, where we could go to chill out, have some caffeine, and just be comfortable.

It was Jan. 13, 2009, when Caribou opened, and along with it the massive 75,000 square foot HyVee that surrounded it. I was literally one of 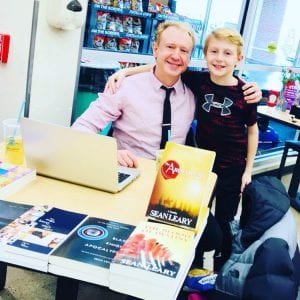 My son Jackson and me doing a signing at Caribou Coffee for our children’s books we’ve written together.

the first people to visit both stores, as I was writing for the also now-defunct Rock Island Argus and Moline Dispatch at the time and they sent me to cover the grand opening. I’d never had Caribou before, and quite frankly, had never heard of it. But it was the beginning of a long love affair of coffee-dark exuberance and honey-sweet effervescence.

I introduced myself to the then-manager of Caribou, Tina, to get a quote for my story, and was surprised and delighted to hear that not only did she know who I was from the newspaper, but she was also a fan of my books, particularly my best-seller, the short story collection “Every Number Is Lucky To Someone.”

“Would you ever consider doing a book signing here?” she asked.

And, I certainly lived up to that initial promise.

I did hundreds of signings at Caribou over the years, at pretty much any time, and any day. So much so that it almost became a running leitmotif on my Facebook timeline to see me posting about doing a book signing at Caribou. I once went to a stand-up comedy open mic and one of the comedians made a joke about me being there and not at Caribou. That’s how ubiquitous my signings were. Before covid, at least.

Tina would depart as manager, succeeded by Mallory, then Nancy, then Chelsea. But throughout the almost 12 years the store was open, I was there. 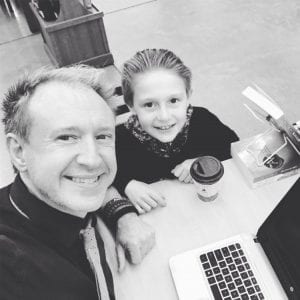 My son and I were regulars at Caribou literally since it first opened in January 2009.

And, so was my son, which made the closing even more bittersweet.

My boy, Jackson, wasn’t even one-year-old when Caribou opened. I was married at the time to his mother, and our family would go to the HyVee to shop all the time, and every time we would, we would stop at Caribou. So much so that the workers got to know us, our drinks, and our kids. They saw Jackson grow up, and over time, he would develop his favorite drinks and his favorite employees.

When I’d lost my job and was going through my divorce, during the maelstrom of chaos in that year, 2011, Caribou was a small but stable touchstone for my son and me. It was like the spinning top in “Inception” — as long as that little thing kept going, things seemed at least a bit ok. Although many, many things were changing in our lives, and his world was being completely tilted topsy turvy, that was one of the small but significant constants, that acted as a parts of a foundation, cobbled together from disparate parts, to keep the world right side up. The two of us going to get groceries and Caribou drinks were one of those things that remained from the “old life,” that no matter what, still had that patina of normalcy to counterbalance anything to the contrary.

His favorite employee during that time was a guy named Erik, who was a gregarious hippie sort, always smiling and happy to chat with my then-three-year-old son, asking him about Thomas the Train or cartoons or whatever was on his mind. Erik and the other folks there would make him little kids-style drinks and it made him feel like a grown up while Dad got his cold-brewed coffee to make it through another day on two or three hours of sleep as a single parent also working and going to grad school.

As my son grew up, and as times changed, and our lives became somewhat less chaotic but busy in different ways, we would spend times there, getting drinks and hanging out. We’d bring a game or soccer cards and play at the tables while we sipped our beverages, or we’d just go 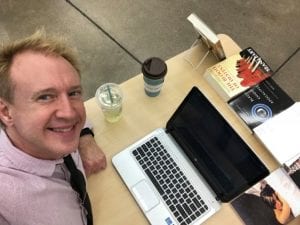 there after school and he would tell me about his day, and we’d talk about soccer, and games, and friends, and life. It was a little home away from home, a cozy nook to just chill out and relax.

There were many other folks who felt the same way, the other regulars I’d see all the time there. The gent who would show up and draw in his sketch pad; the personal trainer who would have meetings with his clients about diet and exercise programs; the parents whose daughter worked there briefly who would bring their youngest kids around for BOGO on the regular and hang out to let the children draw on the chalkboard table Caribou kept around for kids to exercise their creativity while their parents took a break.

All of those things began to disappear when Caribou announced it was going to be closing.

I first saw the sign, literally, in mid-October. The store was being shuttered Nov. 15. We had about a month to say goodbye. Thankfully, none of the workers would be displaced, they were all either getting other jobs at the HyVee, or, had found other employment.

I hadn’t done a signing at Caribou since March 20, the day before Illinois was locked down for covid and everything in our lives changed. I wished I had had the chance to do one more, but it wasn’t to be, with all of the safety protocols put in place there. I also wish I had known my last signing was, in fact, the last. I would’ve cherished it more.

As it was, my son and I continued to frequent Caribou until the day it closed. A Sunday. Nov. 15. As was typical of us on a Sunday, we’d played some soccer, and gone to play some Pokemon Go, and, just before Caribou closed for the last time, we stopped by to get our last 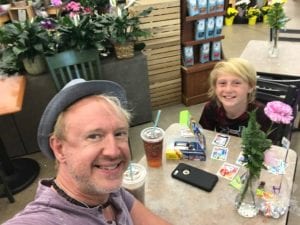 When I returned from driving across country from California for two weeks, one of the first things I did with my son was go to Caribou, get some drinks, and play our favorite soccer card game. We’ll both miss it very much.

drinks. We were the last customers there, after I’d been one of the first, almost 12 years before.

And then, even as we were still standing a few feet away from the spot where we’d picked up our last drinks, they closed the register, shut off the machines, and it was gone.

The next day, my son and I stopped by the HyVee, and the Caribou was already literally demolished. Overnight, a crew had come in and leveled it, and in its place, covering the remains, was a massive tarp that would act as camouflage for the workers who would redesign the area, so that eventually there will be no trace of the coffee shop that was once there.

Only memories will remain.

It seems such a small thing, but it’s so significant in so many ways.

Not just in it being the end of an era for me personally and professionally. Not just in the fact that an anchor, a small but pleasant constant of my existence, and my son’s, and many other people’s, is gone.

But in that Caribou is merely one of many businesses like this. One of many, many which have closed this year.

One of the many areas in maps of our experiences, tapestries of time spent, reflections of paths taken in ways big and small, that in total make up who we are, that make up our lives.

The places we frequent, the habits we hold, the culture we imbibe.

And now, no more.