The musical retells the classic Nativity story with an all Black cast. Traditional Christmas carols are sung in gospel style, with a few songs created specifically for the show. It was one of the first plays written by an African American and performed Off-Broadway in 1961. The show has successfully toured Europe. It is performed in numerous cities throughout the United States annually. The musical includes scenes of reverence, joy, and jubilation. 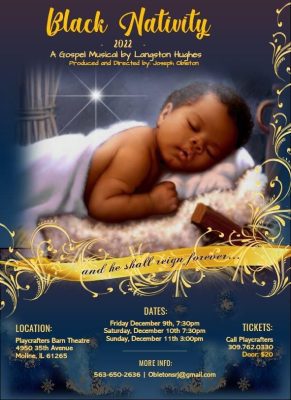 “Black Nativity” — which initially was performed more than half a century ago — has become one of the most beloved faith-based African-American musical plays. The focus behind “Black Nativity” is its religious and spiritual base, stressing the beauty and meaning for the Christmas season.

“Black Nativity” is a play with songs by the great African-American author and activist Langston Hughes, who based it on the narrative of the birth of Jesus as told in the Gospels. It was intended to be performed by an all-Black cast. Hughes enriched the Gospel text with his own poetic gifts and Negro spirituals. “Black Nativity” is a two-act play stressing the importance of the Nativity.

The first act relates the familiar stories surrounding Christ’s birth—no room in the inn, the shepherds watching their flock, the visiting Magi, and so on. The storytelling is ceremonial and reverent, yet with some levity and wit. He inserted such Christmas carols as “Joy to the World” and “O Come All Ye Faithful” and “Go Tell It on the Mountain.”

The second act, shifted to a different time where the reason why the nativity celebration is important spiritually important in these times, uses gospel spirituals such as “Holy Ghost,” “Changed,” “Be Grateful,” “Said I Wasn’t Gonna Tell Nobody” and others.

It is a must-see, musical theatrical production of Spiritual songs interwoven with Hughes’s story telling of the Nativity.