Being an artist means being creative and adaptable, and no one knows this more than longtime Quad-Cities theater veteran Lora Adams.

Co-owner of the Black Box Theatre, 1623 5th Ave., Moline, she was the first in the area to reopen for an indoor production during the Covid-19 pandemic, on July 16 with Jeffrey Hatcher’s adaptation of “The Turn of the Screw,” starring Matt Walsh and Kayla Jo Pulliam (wearing clear face shields), with Walsh playing four different characters. 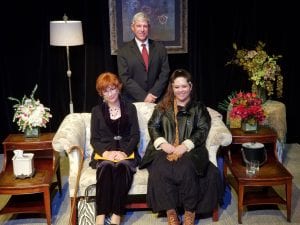 The theater (which originally planned to open “Turn of the Screw” in late March) has been abiding by the state of Illinois Phase 4 restrictions, which went into effect June 26. Patrons are required to wear a mask upon entry and only 26 seats of the 60-seat Black Box will be available in order to conform to social distancing guidelines.

The only other Illinois Q-C theater to resume fully staged productions is Circa ’21 in Rock Island, which opened the four-person “Savannah Sipping Society” on Sept. 9.

The Black Box staged the radio play “The 39 Steps” in August and starting in late September has been Hatcher’s “Three Viewings” — three comic/dramatic monologues set in a Midwestern funeral parlor over a three-day Christmas weekend. 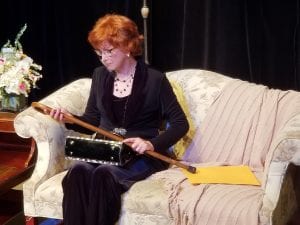 The theater has been averaging eight people per show in the audience, Adams said this week. “Our last two shows made enough to pay royalties and utilities. Our audiences tell us how much they appreciate our safety protocols and the fact we are open and producing,” she said.

Everyone’s temperature is taken at the door and audiences must wear masks while seated.

“Being back on stage is nice, but I put out an audition notice for the roles and no one, and I mean no one, auditioned,” Adams said. “So I had to step in.”

She had talked to Driscoll and Pulliam directly to be in the show. “Having just worked with them both, we have been talking about their interest in upcoming shows since we have had to change our season to accommodate social distancing for audience and actors,” she said.

BBT began its first season in 2017 with Hatcher’s “Murderers,” which also consists of three monologues — from people who take a perverse pride in their crimes.

The three monologues are: 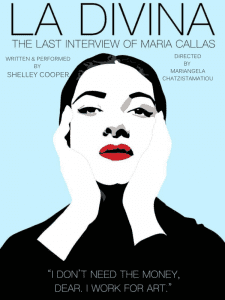 The New York Post has written: “Hatcher’s three brief, intermission-less playlets have the merits and liabilities of that style of American short-story writing which started with O. Henry and, from the careful set-up to the ironic payoff, has never really ended.”

The next two productions at Black Box will be “Waiting for Godot” (Oct. 22-31) and “La Divina: The Last Interview of Maria Callas” with Shelley Cooper (Nov. 6-8).

A long wait for “Godot”

Mike Schulz – another passionate Q-C theater veteran, as actor and director (like Adams) — is directing Samuel Beckett’s bleak classic “Godot,” which started rehearsals in May.

“It all stems from Covid heartbreak for all the graduating seniors — high school and college — who totally got screwed out of their senior-year experiences, and who might now be feeling life is empty and there’s no hope in sight,” he said this week.

It was originally going to be a co-production between QC Theatre Workshop in Davenport and Mississippi Bend Players, based at Augustana College.

“It eventually became apparent that, despite our very diligent socially distant staging and an outdoor venue, we weren’t going to be able to do it at the Augie Pavilion the way we intended,” Schulz (a veteran of both theater companies) said.

“So after I contacted Lora Adams, she kindly said yes, please, do it in our venue,” he said. “God bless her.” 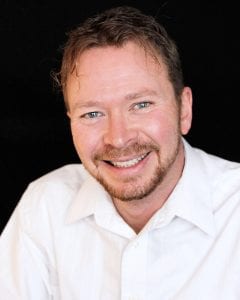 Mike Schulz will direct “Waiting for Godot” at the Black Box.

Schulz says that “Waiting for Godot” is a painfully apt metaphor for what most people have endured since March.

A May piece at popmatters.com made the point, noting in the plot — two guys, Vladimir and Estragon, are sitting by a road under a tree, waiting for Godot, who said he would meet them there, or so we’ve been told. And they wait, and wait.

“It strikes me that Vladimir and Estragon’s waiting is a lot like novel-coronavirus-COVID-19-global-pandemic-induced social-distancing-isolation-stay-at-home-shutdown-work-from-home-quarantine,” the piece said.

The play premiered in 1953 in Paris. It’s been performed at the former Harrison Hilltop Theatre, Davenport, in 2010 (starring Matt Mercer and David Turley), and was staged at Augustana in 1991.

Tristan Odenkirk, a 2020 Augie grad who co-starred with Schulz in last year’s “Biloxi Blues” at Mississippi Bend Players, will co-star in “Godot” with his fellow graduate Peter Alfano.

Originally, Odenkirk planned to direct “Prelude to a Kiss” at QCTW in April, and was going to do it in masks. That had to be canceled and they switched to planning a revival of “Red” (QCTW’s inaugural two-man show, featuring Schulz, in 2012) at the Augie pavilion behind Brunner Theatre Center. And that got canceled, then MBP canceled its summer season – which was to feature the two men in the final play of the Neil Simon trilogy, “Broadway Bound.” (They also were in the first, “Brighton Beach Memoirs” in 2018, with Odenkirk as protagonist Eugene for all three.)

“I started thinking about ‘Waiting for Godot’ in early April, because all of us on the planet were living in ‘Waiting for Godot’,” Schulz said Friday. “You didn’t know what day of the week it was. You couldn’t remember what you did yesterday. It felt like you were being abandoned by God, or Godot, whoever. And of course there are no ends of people to feel bad for with the pandemic.” 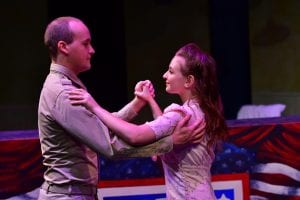 “My heart really started bleeding for high school and college graduates who were not able to go to prom; couldn’t do their last play, their last basketball season or their last choir or band concert,” he said. “They were just kind of trapped with nothing.”

Schulz (an Augie alum himself) wanted to do “Godot” with those graduating college seniors who were trapped together. He discussed it with Odenkirk – who he called “one of the most talented people on the planet” – and Alfano (who’s been in “Noises Off” and “Three Musketeers”).

His dream cast for the rest was Cait Bodenbender as Pozzo and Amelia Fischer as Lucky, with Cait’s 13-year-old son Josef as the boy.

Jackie McCall, the MBP producing artistic director, led a Zoom first reading and she thought it was a great idea for the Augie pavilion.

Schulz knew he could stage it with characters at least six feet apart.

“The Beckett estate refuses to grant you the rights if you have any women in the show,” he said with disappointment. “They are adamant about that, so casting Cait and Amelia was no longer able to happen. They were incredibly understanding.”

Bodenbender became assistant director, they started rehearsing outdoors without Pozzo and Lucky. “It was going great; it was playing like a dream,” Schulz said of the leads. “Those guys play off each other unbelievably beautifully.”

They then planned to stage it at the pavilion in September, without an issue. They met regularly over the summer, and had a challenge in recasting the two roles, since they didn’t have firm dates, Schulz said.

By July, Lora Adams started doing shows at the Black Box again, with “Turn of the Screw,” and “The 39 Steps” in August. Schulz was very impressed with the clear face shields.

“I saw ‘The 39 Steps’ and by God, within 30 seconds, I forgot all about them,” he said. “In certain light especially, it looks like they’re not wearing masks at all. It’s brilliant.” 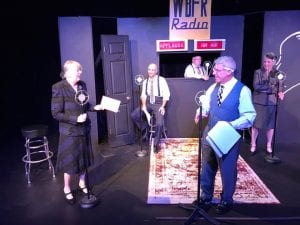 Jim Driscoll, right, in “The 39 Steps” radio play at the Black Box in August.

By the end of August, once they canceled the football season at Augie, Schulz said they wouldn’t allow theater, “for totally understandable reasons,” he said. “There were no hard feelings there.”

Schulz contacted Adams about doing it at the Black Box, and she agreed.

He got Brandon Smith (another 2020 Augie grad) and current senior Jarod Kovach for Pozzo and Lucky.

“Now we have a place, indoors, which is astonishing to us,” Schulz said. “It’s coming together and we could not be more thrilled. It feels like the right place, the right time, and it’s tragic and heartbreaking and it’s also hysterical.”

“It’s not like we haven’t been living ‘Godot’ every day of our lives for the past seven months,” he said. “It absolutely feels like it.”

“We know, it’s foolish to take anything for granted in 2020,” Schulz said. “Somebody in the cast could get sick; any number of things could 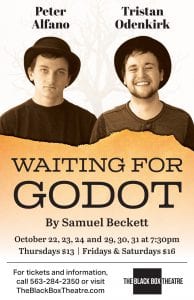 The use of face shields has gone very well, the director said. “Everyone is handling it with amazing humor,” he said. “No one’s passed out. They’re doing great in them. Lora had genius inspiration. And that might be the way theater has to be for the foreseeable future, if you don’t have a space as big as Circa’s, for instance. I think that’s probably the only way theater is gonna happen for a while.” 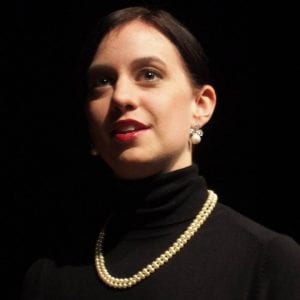 “I would highly recommend for theaters thinking of opening again – face shields, they’re the way to go,” Schulz said.

Shelley Cooper, who teaches musical theater at Augie, also is thrilled to perform the first time at Black Box. She did a one-woman cabaret tribute to Mary Martin and Ethel Merman at Rock Island’s Speakeasy for two performances last month.

“Lora Adams has gone to great lengths to provide quality theatre safely and I couldn’t be happier collaborating with her company,” Cooper said recently.

“La Divina” is a one-woman show written and performed by Cooper, in which she becomes the dramatic 20th-century opera singer Maria Callas (1923-1977). The hour-long show contains stories of Callas’ life and famous iconic arias that she was best known for singing.

Cooper has performed it at Augustana College and at the Retzhof Castle in Graz, Austria as a part of the International Global Theatre Experience.