The three-year-old Crawford Brew Works (CBW) is literally raising the bar on mixing community partnerships, fundraising, volunteerism and the time-honored traditions of local live music and craft beer into a delicious, hearty whole. 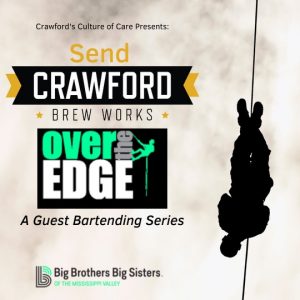 Crawford is working to raise more money on top of the $450,000 the “Over the Edge” event already has raised the past three years.

The brewery and bar, at 3659 Devils Glen Road, has served up a new initiative called “Crawford’s Culture of Care” and it involves a more focused amount of time and energy to local non-profit organizations and getting the brewery’s culture involved in the community. Phase one of this culture is a new guest bartending series, which for two months will benefit Big Brothers Big Sisters of the Mississippi Valley and their annual “Over the Edge” fundraiser.

The first guest bartending date is Monday, July 12th at 6 p.m., featuring CBW general manager Tom Taylor and his wife Jessica serving drinks, with live music performed by Charlotte Boyer (the young 17-year-old local who was recently on “The Voice”). All tips as well as proceeds from selected beer sales will go toward the fundraiser. Beyond the first $2,000 raised for CBW to take 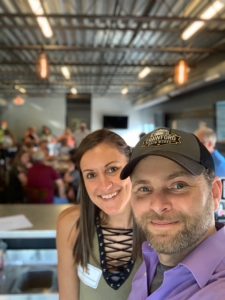 part in “Over the Edge,” they have to raise $750 for each additional Crawford server to be able to rappel off of the 11-story Hotel Blackhawk in downtown Davenport at BBBS’s annual “Over the Edge” event on Saturday, August 21.

Each bartending event (Monday nights through Aug. 9, plus July 21) will feature different guests, as well as live music, Tom Taylor said. The scheduled lineup so far is: 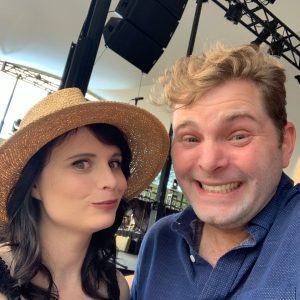 The new program stemmed from a couple factors, from both Crawford’s end and Kayla Kiesey, the BBBS director of events and community partnerships, Taylor said.

“A while back, this was when things opened up after Covid, we really felt a tremendous amount of gratitude within our customer base and within the community and all the support we were shown to help get through that time,” he said. “And you really thought, there’s something we can do with a business to really give back and go above and 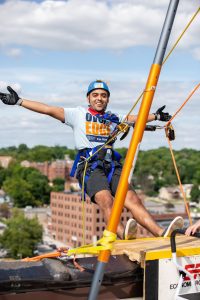 A participant in a past “Over the Edge” gets ready to rappel down the side of the 11-story Hotel Blackhawk, downtown Davenport.

beyond, engaging with the community compared to what a lot of small businesses do. And so we came up with the idea of something called Crawford’s Culture of Care.”

Within that, they would spend two months focused on a particular organization, with four phases of assisting them – guest bartending, dedicating a portion of sales of a specific beer to donate, CBW volunteer work and then one large event that CBW would host and raise money for them.

“With that in mind and I was trying to kick that off in the near future, then Big Brothers Big Sisters actually approached us, and Kayla and I just basically sat down and brainstormed for a while, of different ways that we could work together to help support their organization,” Taylor said. “And when I threw out the idea of the guest bartending series, they really latched onto that. So we’ve taken this opportunity not only to support Big Brothers Big Sisters, but also to start phase one of Crawford’s Culture of Care, which would be the guest bartending series, which has caught a lot of attention, a lot of people wanting to do, not only on our end to raise money for Crawford Brew Works. But a lot of edgers for the ‘Over the Edge’ for Big Brothers Big Sisters. They’ve got a lot of people who are volunteering as well.”

What is “Over the Edge”?

For the past three years, Over The Edge for Kids’ Sake has proven to be a life-changing, once-in-a-lifetime milestone experience for over 300 daring individuals, according to www.bbbsmv.org/overtheedge. Not only have they conquered their fears and hesitations and celebrated their accomplishments with family, friends and co-workers, they have raised over $450,000 for Big Brothers Big Sisters one-to-one 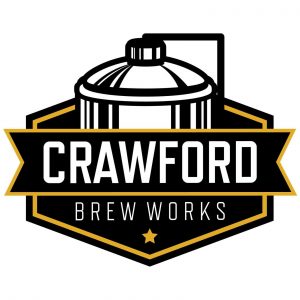 mentoring program. People and organizations can get involved in these ways:

Become an Edger:  Individuals interested in going Over the Edge register and set a minimum goal of raising $1,000.  The registration includes a $100 deposit that is applied to your $1,000 goal minimum. Registration secures your spot in the lineup and gives you access to the fundraising platform and supports provided by Big Brothers Big Sisters to achieve your fundraising goal. Supports include: 1) a fundraising tool kit, 2) personal fundraising webpage to share your story and collect donations, 3) two gathering events that will educate and inspire you to exceed your goal, and 4) direct access to BBBSMV staff and committee members to assist you in your efforts.

Become a Daring Duo: A daring duo is just that — two people who commit to go over the edge together. They have had mother/daughter, sisters, father/son, husband/wife, childhood friends, college friends, and many more duo’s take and accomplish the 11-story challenge. Daring Duo’s share the fundraising goals and their networks to achieve the goal!  The minimum target goal for a Daring Duo is $1,750, $250 less than an individual edger.

A participant in a past “Over the Edge” gets ready to rappel down the side of the 11-story Hotel Blackhawk, downtown Davenport.

Become a Fearless Leader Team:  In addition to individual “Edgers,” there is an opportunity for area businesses and organizations to get in on the fun. The “Fearless Leaders” program engages area employers, organizations and groups of individuals who want to send multiple individuals “over the edge.” Fearless Leader Teams agree to raise a minimum of $2,000 for the first edger and $750 for each additional edger. The team sets the strategy for achieving the goal AND selecting the representative. BBBSMV provides great resources to help you plan and execute your strategy, including custom fundraising pages, workplace and employee engagement and donation strategies and much more.

CBW is doing this third option, and they hope to have up to seven different servers be able to 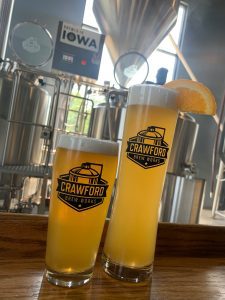 Beer made at Crawford, which opened in May 2018.

rappel “over the edge,” Taylor said.

“Every time we raise $750 more, they will draw one of their names out of a hat to see who gets to do it,” he said. “Between now and August 10th, we’re trying to see just how much money we can raise and how many servers we can get to take part in this event.”

This is CBW’s first time taking part in “Over the Edge.”

“We’ve gone out of our way, basically to really accommodate nonprofits holding events at Crawford Brew Works. But as I said, with the Culture of Care initiative that we’re starting, we’re really looking to get more involved, like outwardly to the community,” Taylor said. “So not just like, if you come here, we’ll work hard to make sure you can raise as much money as possible, but to actually participate in supporting the funds of these organizations that do so much for our community. So this is our first initiative where — while we’ve always done great work with nonprofits — we’re really taking six steps forward and setting the bar for what local businesses can be doing for their community.”

BBBS will be the first of several local nonprofits Crawford will support, and the next one will be in September and October, with guest bartending and one large event at CBW for that organization. Phase three would donate a $1 from particular beer sales, and the last phase would create a volunteer network for those volunteers a couple days a month go to work for that organization. CBW has hosted regular events for nonprofit fundraisers, including for King’s Harvest and Toys for Tots and offering discounts on their event space, and lower price on products to raise more money.

Even after hurting financially due to Covid, CBW feels it’s important to donate to worthwhile groups, Taylor said.

“While there’s a little bit of a financial investment on our end to commit resources, real estate and labor to these causes, there’s two things that come back. That’s developing a strong culture of care within Crawford, which in the end creates people who want to be here and want to 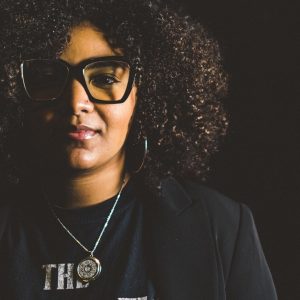 17-year-old Charlotte Boyer will sing at Crawford on July 12 and July 18.

not only support the community, but support us, and that kind of being a cohesive relationship,” he said. “So while there are investments on our end, we find that the good that it does pays off for us as well, even as a business on the financial end.”

BBBS is an ideal group to help in the community, Taylor said.

“We talk all the time in education and in the school system, about making sure that kids aren’t slipping through the cracks, being given the opportunities to thrive in our community. I mean investing in a young person in your community has tremendous value, just that you provide a life and some hope for somebody, on top of the benefits of those people, then growing up to be somebody who become sustainable members of the community, as well as pass on that goodness to other people as well,” he said. “So I think whether it’s any organization that is investing in the youth of your community, to me and to Crawford Brew Works is some of the most important work that can be done.”

For over 30 years, the local BBBS has operated under the belief that “inherent in every child is the ability to succeed and thrive in life,” its website says.

“As a donor supported volunteer organization, Big Brothers Big Sisters makes meaningful, monitored matches between adult volunteers (“Bigs”) and children (“Littles”), ages 7 through 18, throughout eastern Iowa and western Illinois. We develop positive friendships that have a direct and lasting effect on the lives of young people.”

“She’s a big sister through the program and actually the first year that they did the Over the Edge event. She as an individual raised $6,000 and was tremendously hard working to support the organization,” he said. “Back in the early days when we talked about Crawford Brew Works becoming more involved with the community, she was always a part of those conversations because it’s just naturally who she is — caring for other people. Brittney Carstens, especially as one of the original bartenders here, was a little bit of an influence on us wanting to participate.”

A veteran actor in the area, Taylor started working part-time for the Bettendorf brewery when CBW opened in May 2018, and became full-time in late 2019, promoted to GM about two months AGO.

“It was an interesting time because in that, because I started in private events about five months before Covid, and then of course when that hit, event work wasn’t exactly necessary. So my job kind of shifted quite a bit for a while, before finally finding true form about six or seven 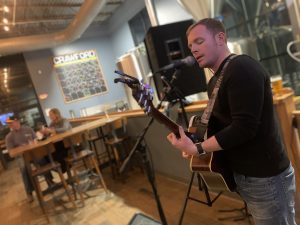 months ago again here and then now stepping into this role, with the job shifting again. So, it’s kind of been evolving constantly here.”

CBW has been offering live music from the start.

“It used to be we would do live music during beer tappings and then it was last summer, we committed to having live music every Saturday night,” Taylor said. “And while we continued that going into this year, as summer was about to begin, we were approached by another musician who said, you know, not enough people have Sunday afternoon music. Then I quickly started booking Sunday afternoon music here, which has been pretty successful for us. And we have a tremendous Sunday group here, between musicians and food trucks, and ice cream trucks and everything.” They have live music each Saturday from 7 p.m. to 10 p.m. and Sunday from 1 p.m. to 3 p.m., and they usually have different food trucks six days a week. CBW has a total staff of 14 and seven have already raised $1,250 for “Over the Edge.”

If you are unable to attend the guest bartending events but still wish to contribute, you can donate to the CBW Over the Edge at https://p2p.onecause.com/oteqc2021/team/crawford-brew-works. To learn more about “Over the Edge,” visit www.bbbsmv.org/overtheedge.