Twenty-four years ago I stood at the entrance of Bent River Brewing Company , with my old man’s ID in my hand. My thumb covering the photo. I wasn’t wise to the world, that world including bartenders being able to tell I wasn’t a 72 year old man.

But, this week I made my triumphant return to sit 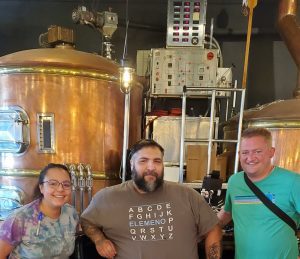 down, enjoy a flight of some incredible brews and even better some amazing food. BRBC has been host to folks not only from around the country, but around the world in search of the signature beers brewed in house such as Undercurrent IPA, Mississippi Blonde, Jingle Java and my personal favorite, Uncommon Stout. While some may travel miles for the beer, today I am here for the food. But first I have to ask the deep dive questions, of what makes BRBC more than just a neighborhood bar.

Sitting down with manager Chelsey, it’s evident that she loves her job. It’s very rare that you see that in this day and age. Her smile and poise for new customers and regulars doesn’t change and the energy she gives off, tells me she loves what she does.
At BRBC this isn’t a rare commodity, in fact it flourishes. Servers and bartenders shoot back and forth checking on customers, smiling and waving at each other and making sure everyone is enjoying their time between the store front and the patio out back. It’s a well-oiled machine with a staff that loves not only what they are doing but where they are doing it.
If you ask Chelsey how she deals with the Karen’s and the Kyle’s of the pandemic food scene, she smiles and brings them another round. Bent River hasn’t been immune to distasteful customers, but they handle them with a little grace and understanding. Because in this time and age, who doesn’t need a drink or three right now?
What does she like best about her job? Us, the customers and of course her loyal and loving family that clocks in with her at the beginning 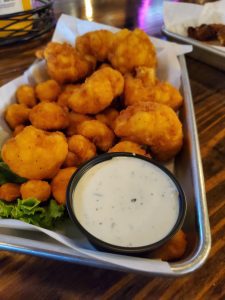 and ending of each shift.
Alan Vrombaut, a dear old friend of mine, is one of those that has become like family to Chelsey. A little about Alan. I first met him back in high school rocking out in a gym full of students playing guitar to Pink Floyd. He traded his shaggy hair and hippy shirts for a shirt and tie desk job that left him questioning his life. Now my friend is back in a pair of relaxed fit khakis and a t-shirt to become a server/spirit guide along my journey. Alan isn’t alone in this new age of employment. With increasing wages and a less stressful environment many workers are finding their new paths less corporate and more friendly. Seeing a smile on the face of a friend that has spent so much time behind a desk and stressed means the world to me. And he’s found that happiness again working at BRBC.
Now on to the food. BRBC opened its kitchen in 2009 nearly 13 years after it became a staple in the Quad Cities. Since then the menu has become something amazing. Serving such creations as the Uncommon Patty Melt, The Get Bent Burger, and the Bent House. The food here is on par if not better than most sit down locations I’ve tried in my travels. This isn’t a greasy burger, bar food stop. This is quality borderline gourmet eating. 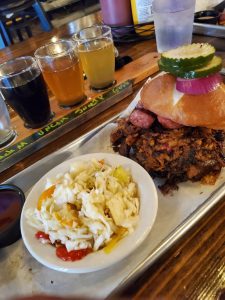 My first plate is the Buffalo Cauliflower Nugs. I can appreciate some of you may be upset that I didn’t get wings, but trust me you’ll want to give these a shot. Batter dipped and fried cauliflower bites, tossed in a mild buffalo sauce these hit the spot. I could eat these daily to get my vegetables in.
Bent River Brewing Company has me sold on the Bent House sandwich, it’s a triple attack of meats. One could say I get the meat sweats just thinking about it now. House smoked brisket, pork and Andouille sausage topped with a house made bbq was gifted to us savages by a group of beer drinking angels. I feel like a Neanderthal wiping the sauce out of my beard because I’m not using a silk handkerchief. I’d be in heaven with any of these three smoked meats by themselves, instead I have a menage-a-trois of debauchery in my mouth.
Last but not least and on the side is my side of Coleslaw. I feel bad calling this coleslaw. It’s like comparing the Sistine Chapel to a finger painting my nephew did in day care last week. I love you buddy, but the picture you drew of your cat with seven legs and three tails just isn’t realistic. Although neither is the taste of this slaw. Red peppers, banana peppers and fried cabbage, set this “side” apart from anybody else’s anywhere in the world. Made in house, and slapped in my face, I want a autograph and a portrait of this Chef, whoever it was, that created this, tattooed on my left butt cheek, to cover up the calligraphy styled “Suns out, Buns Out” mistake I made after a weekend in Tijuana. All my family reunions will feature this cole slaw from now on.
We’ve unpacked a lot here, but I think you all have a better understanding of what is really going on at Bent River Brewing Company. Stop in for a beer, stay for some food, and enjoy the company.
Your friend in food,
Doc 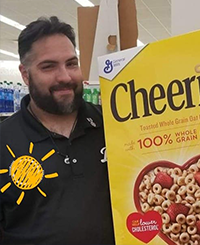 Doc Kaalberg
Doc Kaalberg is a local QC Native of 35 years. He has traveled the world, and found himself at home here. He served with the famed 1st Infantry Division as a Combat Medic and after being wounded in combat retired to Moline, Illinois. Doc spends his spare time blogging and writing food reviews for the local QC food scene.
See More Articles From Doc Kaalberg