“The Music Man” – opening Friday at Countryside Community Theatre in Eldridge – is special for many reasons, for its director and three main leads. 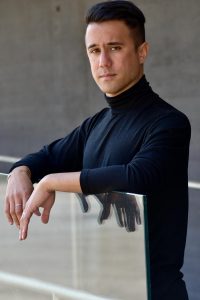 Tommy Ratkiewicz-Stierwalt is making his community theater directing debut with “The Music Man.”

Tommy Ratkiewicz-Stierwalt, the director, is excited to be making his directorial debut at CCT, performing at the North Scott High School Fine Arts Theater, 200 S. 1st St., Eldridge. Raised in Moline, he acted in many school productions, eventually branching out into the community.

Ratkiewicz-Stierwalt played Marcellus Washburn (a former con man and friend to Harold Hill who lives in River City) in “Music Man” in 2016, in Tipton, Iowa.

“I grew up listening to ‘West Side Story’ and ‘The Music Man,’ that my grandma would play on the piano,” he said this week. “I’ve had a close connection to the show because of that, and my grandma worked at the Bettendorf library and she also taught piano lessons. So I have like Marian right here in my family.” 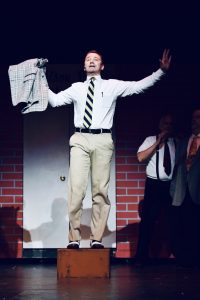 He saw the Music Guild 2011 production of “Music Man,” and really wanted to direct it.

“The Music Man” (1957) — which won five Tonys, including Best Musical over “West Side Story” — opens in 1912 on a train leaving Rock Island. Harold Hill (here played by Kyle DeFauw) is a scam artist, posing as a boys’ band organizer, selling instruments and uniforms, but skipping town with the cash without forming a band. River City’s librarian and piano teacher, Marian Paroo (Peyton Reese), sees through his ruse, but when Hill helps her shy little brother, she falls in love with him.

Ratkiewicz-Stierwalt loves both “West Side” and “Music Man,” the former more for the dancing, but he relates more to the story of the latter. “It’s a tie, there we go,” he joked.

His area acting credits include Emmett in Legally Blonde (MCCT), Balladeer in Assassins (Black Box), Seymour in Little Shop of Horrors (CCSP), Brad in The Rocky Horror Show (Circa ‘21 Speakeasy), Ghost of 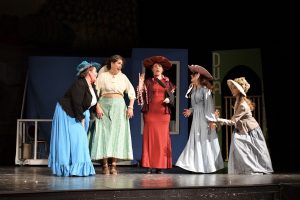 A scene from Countryside’s “Music Man,” which opens Friday, June 25.

Christmas Past in A Christmas Carol and Harry in It’s a Wonderful Life (QC Music Guild).

While he’s helmed some high school shows, directing his first community production has been very daunting at times, Ratkiewicz-Stierwalt said.

“It’s helping me make sure I know what I’m doing and I’m relaying what I need to relay to them,” he said. “It would be a lot more difficult to cast ‘Music Man’ in a high school versus the community, because you have people who are all ages and can fit the variety of different ages in the show.”

CCT’s “Music Man” was originally cast in early 2020 for that summer, but had to be postponed with all the Covid cancellations. Peyton Reese, who was cast as Marian Paroo, did her first musical at Countryside – “The Wizard of Oz” in 2011 — when she was 11.

She is a rising junior at St. Ambrose University, studying elementary education. A Davenport Central alum, Reese’s previous roles include Elle Woods in Legally Blonde, Sherri Rosen-Mason in Admissions, Diana Goodman in Next to Normal and Veronica Sawyer in Heathers. 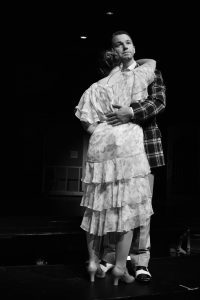 “Admissions” was done this past April at SAU, which featured DeFauw and Reese (among a cast of five). His last musical was “Beauty and the Beast” at Music Guild in 2019 (DeFauw was Archibald Craven in Music Guild’s “Secret Garden” in early 2020, which had to be canceled twice), and Reese’s was “Big Fish” at SAU in fall 2019.

“It’s very nice to make art with people in a different way,” she said. “I had never done a straight play until this year at St. Ambrose. I had always done musicals before then. Just to do another one after so many plays is really nice.”

The “Music Man” cast of 35 started rehearsing in early May, and they wore masks up until about three weeks ago. Then, cast members who were fully vaccinated had the option to not wear them.

“Musicals are always full of energy, electric,” DeFauw said. “There’s something different about them that spark 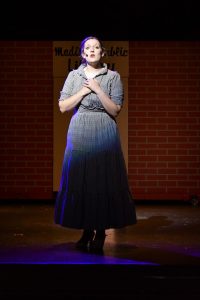 my interest and I want to be a part of them. It’s a different level of theater.”

“I feel like it’s a different feeling in musicals. I love straight plays, but musicals have a different feel,” he said. “I love both and I want to do both. It’s just, I need ‘em both.”

DeFauw — who was Marius in CCT’s “Les Miserables” in 2014 — expects to graduate from SAU in spring 2022. His acting credits include Bill Mason in “Admissions,” Michael Wells in “Two Rooms,” and Monsieur d’arque/Ensemble in “Beauty and the Beast.” He also co-directs the Bettendorf Show Choir at Bettendorf High School.

Jack Bevans, who plays Marcellus in the new “Music Man,” has been involved in over a dozen musicals, plays and short films. Favorite roles include William Barfée in “The 25th Annual Putnam County Spelling Bee,” Ram Sweeney in “Heathers: The Musical” and Peter Penvensie in “The Lion, The Witch and the Wardrobe.”

“My favorite part is just being around people,” Bevans said of theater. “My freshman year of college was the Covid experience, where we were all secluded and wearing masks.”

“I was on campus, but we were limited in guests we could have in our room and we wore masks everywhere,” he said. “A lot of our classes were just online, so I did them from my room. It’s so nice to be surrounded by people and friends, to be able to do something as part of a group, a team. There’s such a wide array of people in the cast I never would have gotten a chance to meet if it weren’t for this musical.”

The most recent musical Bevans was going to do was “Anything Goes” at Davenport Central in spring 2020, which got canceled, so the last musical he was in was “Putnam County Spelling Bee” in fall 2019.

Reese was part of the fall 2020 SAU radio play, “Enemy of the People,” which replaced the previously planned musical, “First Date.”

“That was my first play and I decided to do it because I wanted to work my way into it,” she said. “You didn’t have to worry about doing facial acting, but more voice acting, which was really interesting to me. It was very fun – it was a nice cast and a cool show.”

Making “Music Man” their own

Despite its classic status (especially as an Iowa musical, set in 1912), Bevans had no idea what “Music Man” was before getting involved, but wanted something to do for the summer. “I was bummed out because my senior show was canceled and I wanted to do something different,” he said. 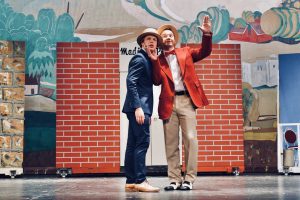 Bevans graduated Central in 2020 and Reese in 2019 from the same school.

“Marcellus is one of my favorite characters I’ve ever gotten to be,” he said. “I like being fun and enthusiastic, and a bit spontaneous, and this is partly due to Tommy – but I’ve been given the freedom to do tricks and stunts, and just be a little crazy in the show.”

“I really saw a lot of myself in Marian,” Reese said of her role. “Just a lot of personality-wise, her mature independence.”

She won the “triple-threat” award in 2019 from the Iowa High School Musical Theater Awards, 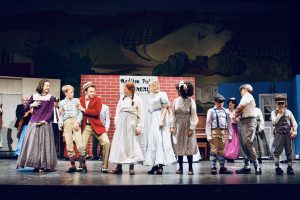 A group scene in CCT’s “The Music Man.”

which sent her to the national Jimmy Awards competition in New York City, representing Iowa.

Reese got to perform for judges who worked either on Broadway or for Disney, at the Minskoff Theatre (home of Broadway’s “The Lion King”). “It was really awesome,” she said.

Ratkiewicz-Stierwalt consistently bugged DeFauw to try out for Harold Hill early this year, noting that and a few other roles had to be re-cast from 2020.

“I really wanted to be part of something and I knew I wanted to perform,” DeFauw said. “Peyton asked me. She was like, hey, I’d done stuff with her, and I knew she was really good. I’m grateful to be chosen by Tommy and Peyton, to take on Harold Hill, which is a more insane role than I ever thought it would be.”

“The music is wild at times,” he said, noting he had a lot of trouble getting a handle on the rapid-fire mouthful that is “Ya Got Trouble.”

“When we first got into that song, I had no idea. I knew about ‘Seventy-Six Trombones,’ and I knew about ‘Goodnight My Someone,’ but when we started doing ‘Trouble,’ I had no idea what this song was and it just blew me off my feet,” DeFauw said. “It’s one of the most challenging songs I’ve ever had to perform on stage, for sure.”

“You got to tell the story, too,” he said. “It’s been very challenging but I love the challenge every time I come to the stage.”

“I’m not that charismatic,” he said. “It’s always really fun, exploring sides of you that aren’t part of your personality. I find it very 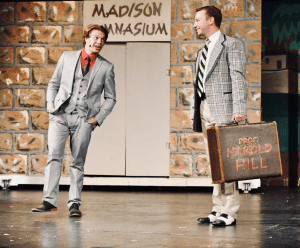 “With everybody in the show, but for these three, very early on in the rehearsal process I wanted my direction and my vision to reflect who they are in 2021, as opposed to them immediately going back and being a cookie-cutter of Robert Preston or Shirley Jones,” Ratkiewicz-Stierwalt said of the 1962 movie’s stars.

“I wanted them to be able to pull likenesses of themselves and the differences as well into these characters,” he said. “So when audiences see it, they’re not just ‘Oh, another Robert Preston.’ ”

“Kyle is a very charming person to be around,” Ratkiewicz-Stierwalt said. “He is very sweet. Peyton, oh my God, she is just so kind and compassionate, and maybe a little Iowa stubbornness that Marian has. Marian teaches piano and is always trying to look out for everyone’s best interests and that’s who Peyton is in real life.”

Of Bevans, the director said: “Every time he’s on stage, he’s having fun. He’s quirky. That’s who, in my opinion, who Marcellus is. Harold and Marcellus – they’re two best friends, and when you see their number, ‘Sadder but Wiser,’ is that Harold and Marcellus or is that Jack and Kyle? They have done so well blending their real life into the script that Meredith Willson has given to us.”

Performing “The Music Man” in Iowa, along a big river, is coming full circle for Ratkiewicz-Stierwalt.

“To have been in the show before and now to direct it with such an awesome group of actors and actresses,” he said. “It does mean more, for

The lobby of North Scott’s auditorium, which was renovated in 2018.

this show specifically, because it is based in Iowa.”

“People like to see things they can relate to,” Reese said. “Oh yeah, a small town in Iowa – I know that. They’ll get it.”

“All the name dropping in the show, things I recognize – the Wells Fargo wagon,” he said. “In ‘Iowa Stubborn,’ we start listing the cities and I get to shout Davenport as loud and proud as I can. That’s my home; it’s where I grew up.”

“It lands differently here in Iowa, for sure,” DeFauw said. “It’s something people can relate to.”

“Any form of art that people can relate to is very special,” he said. “Everyone can have that connection; it doesn’t have to be someone involved in the arts a whole bunch.”

The last CCT show was “Mamma Mia!” in July 2019, itself the first CCT musical at North Scott in four years, following the completion of a $3.7-million theater renovation in 2018.

The theater capacity for “Music Man” will be capped at 400 patrons, with groups separated for social distancing. Performances will be at 7 p.m. Friday and Saturday (plus July 1-3), and 2 p.m. Sunday, June 27. Tickets are $15 each, available HERE.