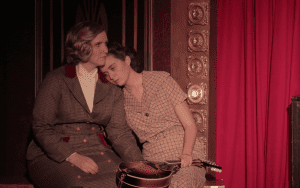 theater in which the story takes place as “frivolous nonsense.”

Well, in the midst of what seems like a greater 21st-century Depression (see: Covid, unemployment, racial injustice, political division and endless quarantine), I think a little mindless, frivolous nonsense is just what we need right now.

Filmed recently at the Circa ’21 Speakeasy (featuring eight mask-less cast members), the 2014 musical – affectionately written and directed by Tristan Tapscott – should appeal to fans of the film “O Brother Where Art Thou” and the Circa ’21 favorite “Southern Crossroads.”

Its simple story and earnest entertainment is gently draped over a string of classic hits like “Big Rock Candy Mountain,” “House of the Rising Sun,” “Keep on the Sunny Side of Life” and “Circle Be Unbroken.”

The filmed musical, from Circa ’21’s Speakeasy, is available online through February.

In the gossamer-thin tale set in 1932, a merry trio of misfits (who broke out of prison, literally a band on the run) sneaks into a theater hoping to stay out of trouble. They instead find themselves front and center in a welcome tale about the power of music and second chances. The small, solid cast includes a down-on-her-luck theater owner, her wacky assistant, a clueless town mayor, his scheming wife and a

Tapscott – a Circa ’21 veteran – premiered the musical in 2014 at his former District Theatre in Rock Island, and it played many times after that (including the Speakeasy in early 2015). He said it’s an ideal time to bring back now, filmed in the Speakeasy without an audience, and is available online through March 1.

“I think it’s the perfect show for right now, because it warms your soul in a lot of ways,” Tapscott said recently. “Between the cold and the pandemic and everything else, I think a feel-good bluegrass show is what we need. And there’s some heart to it. It’s not necessarily all fun and games the entire time. But, it’s also one of those shows that’s in and out – we do our beginning, middle and our end, and we let the audience leave, or in this case shut off their televisions.”

“We don’t dwell on anything too much. The music’s great, and in a way, to sit and enjoy something and not to have to think about all the 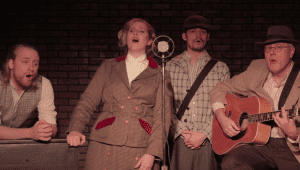 craziness that we’re going through is a welcome thing right now.”

Kutzli (who did the new musical arrangements) plays King, the band leader; Bobby Becher is Levi, the piano player; Natarelli is Walt, the guitar player; Ashley Becher is Georgia, the theater owner, Strandin is Claudia, the handy woman; Turczynski is Willie, the dopey, occasionally drunk sheriff; Horvath is the mostly mute mayor Teddy and Cooper is his cruel wife Velda, who doesn’t stop talking and hectoring.

Khalil Hacker was the cinematographer and editor for the 74-minute production – which had just three rehearsals and two long days of filming in the Circa Speakeasy. 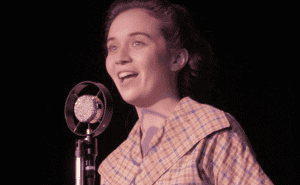 Highlights include showcases for the three guys – “Big Rock,” “Keep on the Sunny Side,” and “Life’s Railway” – as well as company numbers like “May the Circle Be Unbroken” and “Amazing Grace” that all feature great vocal harmonies.

“House of the Rising Sun” is a dramatic tour de force, led by Kutzli (including a harmonica solo), and some nice camera work that shows Becher on the keys. As opposed to a live in-person show — where your view is strictly one-sided from your seat – Hacker skillfully blends in some evocative reaction shots of Strandin and Ashley Becher from the side of the stage.

Ashley really shines in two numbers that seem very relevant today – “Broken Down Soul” in the first act and “Hard Times Come Again No More” in the second half of the brisk show. Yes, God, we clearly have had enough of these devastating times.

Strandin is wonderful in her lilting waltz, “Moonshiner,” and as Claudia she gets to live out a dream of being onstage, and tries her hand on 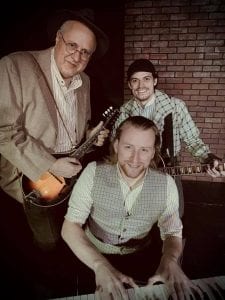 mandolin for “Amazing Grace,” where Horvath as Teddy finally finds his voice.

That’s the dramatic climax of the story – where the previously clownish Teddy has had just about enough of his wife’s uncaring nastiness (wanting to close the theater) and he erupts at her, accusing her of being a liar and cheater, a true politician (again, so timely today).

Teddy finally stands up to her, as it’s his time to talk, accusing her of bribery, forgery, misappropriation of funds and voter fraud (and she’s just unpleasant). He wishes for her to be put away for a very long time

The full “Big Rock Candy Mountain” cast at the close of the show.

Though Cooper is renowned as an opera and musical theater singer in real life, she really doesn’t get to spread her vocal wings here, but does join in the jubilant, life-affirming song reprises at the close of the show.

The one drawback of the streamed “Big Rock Candy Mountain” for me is the constant insertion of an audience laugh track and other crowd noises. While the characters speak directly to the audience throughout, the artificial audience audio really was distracting and took you out of the ambience of the piece. 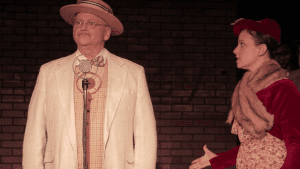 Janos Starker plays the town mayor and Shelley Cooper is his cruel wife.

Laugh tracks for TV comedies have long been abandoned (for the most part) and I don’t think it would detract from enjoyment of the show if it was removed here as well.

Kudos to Tapscott and the fun-loving gang for keeping Q-C theater alive and giving work to talented performers who have been so hurt by the pandemic. Veteran Circa costume designer Greg Hiatt fittingly outfits the cast here. Proceeds from ticket sales will go to benefit Circa
’21, The Circa ’21 Speakeasy and all of the artists on screen and off.

Tickets (starting at $10) are available by visiting ShowTix4U.com and searching Circa ‘21 or clicking this link:
https://www.showtix4u.com/events/17497.

Jonathan Turner
Jonathan Turner has been covering the Quad-Cities arts scene for 25 years, first as a reporter with the Dispatch and Rock Island Argus, and then as a reporter with the Quad City Times. Jonathan is also an accomplished actor and musician who has been seen frequently on local theater stages, including the Bucktown Revue and Black Box Theatre.
See More Articles From Jonathan Turner
Tagged: Anthony Natarellibig rock candy mountainBrett HitchcockCirca '21Denny HitchcockDoug KutzliSavannah Bay StrandinTristan Tapscott