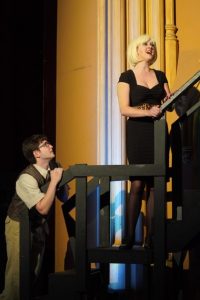 Mermaid,” “Beauty and the Beast,” Aladdin,” “Newsies,” “Hunchback of Notre Dame” and “Enchanted”), he wrote the downright delightful, infectious music for “Little Shop of Horrors,” which opened in 1982 and became the highest-grossing Off-Broadway show of all time.

Not only did the little musical that could get made into a popular 1986 film and launch Menken’s dazzling career, the riotous show has become a community-theater staple (done in spring 2017 at Moline’s Music Guild), and is now being gloriously staged in a pitch-perfect production at the Spotlight Theatre, 1800 7th Ave., Moline.

From its top-notch crew, passionate on-stage orchestra pit, to every acting part ideally cast, this has to be the most fun and fully-realized show I’ve seen yet at the three-year-old Spotlight. 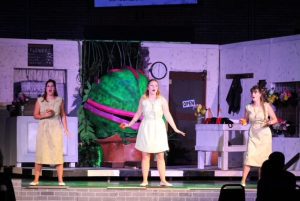 Lovingly directed by theater co-owner Brent Tubbs, and starring Jacob Johnson as Seymour and Becca Johnson (no relation) as Audrey, the Alan Menken/Howard Ashman musical is a dream come true for all three. Even though the black comedy is a nightmare for its characters, it’s literally a dream to witness for musical-theater junkies like me.

Based on a Roger Corman B-movie, non-musical cult classic (1960), here the meek floral assistant Seymour Krelborn stumbles across a new breed of plant he names “Audrey II” — after his coworker crush, Audrey. This foul-mouthed, R&B-singing carnivore promises unending fame and fortune to the down-and-out Krelborn as long as he keeps feeding it human blood. Over time, though, Seymour discovers Audrey II’s out-of-this-world origins and relentless march towards global domination. 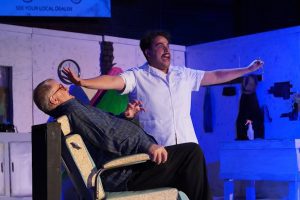 Adam Sanders terrorizes a patient as the sadistic dentist Orin.

Tubbs said this was his favorite show growing up, and he loved the 1986 movie version (directed by Frank Oz). “Rick Moranis was like my spirit animal as a kid,” he said of the star who played Seymour. The film co-starred Steve Martin as the sadistic dentist Orin, Ellen Greene as Audrey and Levi Stubbs as the voice of Audrey II.

The film version is far more sanitized than the bleak original, and while Oz filmed an ending based on the Off-Broadway musical (in which Audrey II eats all the main characters), after audiences at preview screenings didn’t react positively to it, the ending was re-written and re-shot for theatrical release with a happier ending. Another major difference from the movie is Steve Martin played the villainous Orin much lighter, with a comedic gleam in his eyes.

In the Spotlight version, the amazing Adam Sanders certainly has a gleam in his dark, intense eyes – but he goes all out as a crazed, full-throated, evil psychopath. At intermission Saturday night, I mentioned to his wife Bethany that he may have pulled out all the stops in a thrilling, terrifying, over-the-top performance since he doesn’t appear in the second half, until the boisterous finale (“Don’t Feed the Plants”).

As the black leather-jacket wearing, motorcycle riding bully, the demonic Sanders is initially Audrey’s abusive boyfriend who beats her and 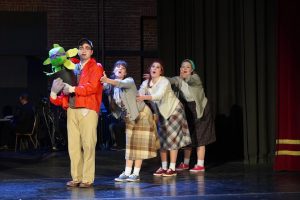 insists she call him “doctor.” Though Seymour and his boss Mr. Mushnik (Chris Tracy) say she can do much better, Johnson confesses that you don’t meet nice guys on Skid Row.

Sanders is truly a gas, in two showstopping numbers. First, in “Dentist!,” he explains how his murderous tendencies as a child led him to choose an occupation where he gets to inflict pain and suffering, and in fact, gets off on it. The wild actor is flamboyant and frenzied, with a barely controlled cackle, and makes the most of both scenes. In “Now (It’s Just the Gas),” Seymour comes to shoot Orin (so he can feed him to the plant), but the dentist puts on his mask for laughing gas – decorated by long cords bedecked in red and green lights.

Sanders wields a huge, rusty drill and sings through the mask (required even pre-Covid), and seemingly extends the number far longer than it was originally written. His extended, over-dramatic suffering and death scene is a manic tour de force, both scary and immensely satisfying. 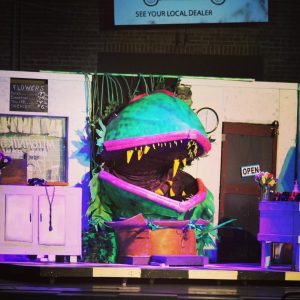 The alien, monstrous plant Audrey II is voiced in Moline by Kevin Moore and operated by Violeta Jensen.

The Spotlight smartly uses a rotating set on wheels, which shows the inside and gray brick exterior of Mushnik’s flower shop, and there’s a black stairway and balcony on the right edge of the stage that’s effectively used for select scenes. One of many consistent highlights of the show is the sassy doo-wop version of a female Greek chorus – Chiffon, Crystal and Ronette, expertly embodied by Kirsten Sindelar, Lily Maynard and Becca Casad. They excel in exuberant, stylish choreography (by Robyn Messerly) and impress with gorgeous, stunningly strong voices and flawless three-part harmonies.

That’s displayed from the start in “Skid Row,” which becomes Seymour’s “I want” song – where he declares his need to escape the poverty, despair and violence of the downtown. It’s great to hear the slow luxuriating of the “get out of here” section as it gradually gathers steam and speed to the song’s exhilarating climax, with the full cast.

Jacob Johnson, 21, is not related to Becca Johnson, 27, who’s playing Audrey, but they share an adorable chemistry – articulating their idealistic dreams of finding success, happiness and love. With their innocence, kindness and willingness to help others, they save each other, but literally sacrifice their lives to the all-consuming alien plant. Jacob and the bobby-soxer-style trio are very cute in “Ya Never Know.” 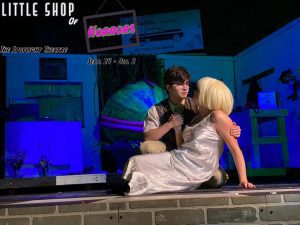 Jacob Johnson and Becca Johnson near the end of Spotlight’s “Little Shop of Horrors.”

Becca is beautiful in her poignant, longing, wistful “Somewhere That’s Green,” that both comfortingly conjures the past and imagines the future simultaneously. Early in the second act, the two Johnsons finally find each other in the soaring, standout ballad “Suddenly Seymour” (one of my favorite duets ever). Jacob starts as a mature, tender, compassionate boyfriend – finding his footing and his role as hero – and Becca shows off her powerfully bright, shining voice. As the song builds, it’s reflected as the two climb the steps and the female trio adds in great, rich harmonies and the end on top of the balcony is an ecstatic, inspirational triumph.

That alone is worth the price of admission, but this “Little Shop” has so much more for sale. The solid, dependable Chris Tracy nails his Jewish, mensch Mushnik – a sweet, fatherly figure who meets his downfall after he accuses Seymour of doing away with Orin. Their “Mushnik and Son” is very entertaining, a klezmer-infused tango, and Tracy definitely adds shades of Tevye from the classic “Fiddler on the Roof.”

The unseen star of the entire show is Kevin Moore (who deservedly gets a bow at the end), who provides the booming off-stage voice of Audrey II, and the large versions of the colorful homemade plant (whose top looks like a watermelon) are manipulated from within by Violeta Jensen. The selfish flytrap, bent on world conquest, is single-minded and devilish in Moore’s larger-than-life portrayal. Seymour 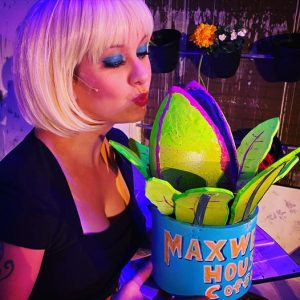 Becca Johnson as Audrey, gets friendly with her Venus flytrap counterpart, Audrey II.

hesitatingly strikes the fatal, Faustian bargain with Audrey II, and the banter between the two is both frightening and dead-on hilarious.

“Feed Me,” “Suppertime” and the frenetic, horrifying apex of the story are clear highlights for Moore and the huge puppet that the talented Spotlight crew built and operates. Spreading out smaller roles among vibrant, quirky ensemble members also makes “The Meek Shall Inherit” a lively, joyful journey to fame for Seymour.

Under music director Katie Griswold, the 10-player pit is terrific, and costume designer Heather Blair is spot on in dressing the energetic cast – including costume changes for the three women (I especially liked the brief display of sparkly black and silver short dresses at one point).

One main concern needs to be raised – which really doesn’t affect overall enjoyment of the show – is that the cast is entirely white, when Audrey II and the trio of women are usually represented by Black performers. Not sure if Tubbs didn’t reach out to, or get African-Americans to try out, but that lack of diversity is noticeable.

Co-owner Sara Tubbs clarified that Violeta Jensen is a person of color in the cast and Sanders is also half Hispanic. Spotlight unfortunately had no other performers of color come audition for “Little Shop,” she noted.

“We publicize our auditions and always note that anyone and everyone are welcome,” Sara said Monday.

This is a “Little Shop” that should not be missed, and you’ve got just one more weekend – 7 p.m. on Friday and Saturday, Oct. 1-2, and 2 p.m. Sunday, Oct. 3. Tickets are $20, available at thespotlighttheatreqc.com. The program also is available online HERE.

Reminder – in Illinois, masks are still required for patrons at indoor theaters (despite what I saw from many at the Spotlight). Just not the kind with nitrous oxide; you definitely won’t need that to laugh during “Little Shop.”