The Video You Deserve does not live on vintage videos alone.

Sure, most weeks we give you a cheesy video to start your week, when we drop The Video You Deserve every Monday morning, usually one from the early days of the video in the ’80s and ’90s, but sometimes we mix it up to reflect more current videos that are just as cheesy and strange.

If you, or a child or friend, is on TikTok, you’ve undeniably heard the following line:

Usually though, that’s ALL you hear of the infamous Millie B tune, “M to the B,” which is really quite a shame, because — WARNING, OFFENSIVE AND DIRTY LYRICS AHEAD — the rest of it is a grimy skanky masterpiece. 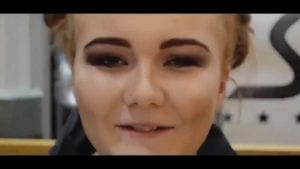 “Got murked by Little T. Now ya gettin murked by me!”

Millie B was part of a movement that rose to prominence in 2015-2016 called Blackpool Grime, which rose up in Blackpool, England, and predominantly concerned lower income amateur rappers ripping on each other, or, in their parliance “sending” to each other. The twist was that most of them were pre-teens and early teens, which made it all the more perverse, strange, and actually kind of hilarious. The first one to become notorious was a 12-year-old named Little T, who liked to rap about killing people and having sex with their moms. So, you know, Disney Channel stuff. He was quickly joined in notoriety by Soph Aspin, a girl not much older, who would likewise rap about other girls being skanks and her kicking ass. But soon, the battle royales between those two began, and into the fray came another young teen with a filthy mouth, Millie B, whose send to Soph Aspin, “M to the B” was pretty much a grime masterpiece.

Little did she, or any of the Blackpool Grime rappers, know that four years later, she, or rather, her song, would become TikTok famous for being lip synched by a bunch of amateur models and “influencers.”

Ironic, since people like Millie B and her Grime compatriots were not only the antithesis to the pretty boys and girls of social media, but would’ve wanted to kick their candy asses. As you’ll see, and hear in this video.

It’s pretty much stereotypically brilliant Blackpool Grime, from its foul lyrics to its working class fashions to its nods to such banal things as KFC and convenience marts. And in its own way, it’s really kind of genius. So, this is where it all started, and by “it,” I mean the song snippet that’s undoubtedly earwormed its way into your head if you’ve been on TikTok at all over the past few months.

But it all began here, with this video, “M to the B,” by Millie B, your VIDEO YOU DESERVE… (oh, and again, DIRTY, YET HILARIOUS, LYRICS AHEAD, SO YOU’VE BEEN WARNED…)

Sean Leary
Sean Leary is an author, director, artist, musician, producer and entrepreneur who has been writing professionally since debuting at age 11 in the pages of the Comics Buyers Guide. An honors graduate of the University of Southern California masters program, he has written over 50 books including the best-sellers The Arimathean, Every Number is Lucky to Someone and We Are All Characters.
See More Articles From Sean Leary
Tagged: blackpool grimelittle tm to the bmillie bSean Learysoph aspintiktokvideo you deserve