The Quad City Storm electrified the coffers of local charities during the hockey team’s inaugural season, striking lightning with the power of generosity as they raised a whopping $162,754 for area charities.

The Storm held its end-of-season press conference Monday to announce the gifts and wrap up their inaugural journey, which ended with a 5-4 win over Evansville at Moline‘s TaxSlayer Center Saturday night. QuadCities.com was happy and proud to be a media sponsor of the team and will continue as a sponsor in their second season. 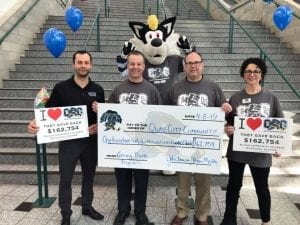 “Where do I begin?

We did what some thought was impossible.

We had more naysayers than supporters in the beginning. But we didn’t listen and true grit and determination took over.

We assembled a team both on and off the ice that we knew could make this first season special and they did it. Was our win/loss record what we wanted. No. But we won in so many other ways.

Our coach hired good players with big hearts who logged in more than 100 hours of community service. These guy gave back and made the Quad Cities their home.

The staff worked tirelessly, including our interns, to make every game as fabulous as the last. We wanted funny and entertaining games and proved we could do it. Our goal was “good to great” and we did it. 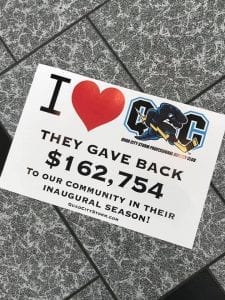 The owners stayed true to their word of giving back to the community and we pushed our giving over $150,000 this weekend! Monday morning at 9am we will reveal how much we gave back at our press conference at the TaxSlayer Center. Please join us in celebrating with our whole team.

And me? This hometown girl from Eldridge, Iowa, who didn’t know a thing about hockey, was given the opportunity to break a glass ceiling and took it. I was awarded the highest honor in community service this week, the Athena Award, and I couldn’t be prouder. My crazy ideas worked and I made naysayers believers. I can’t thank the friends and family that supported me along the way cause I couldn’t have done it without you.

And I will continue to believe in one motto..

I love you and thank you Storm fans!”

The Storm begin their second season in the fall. For continued coverage of the team in the off-season tune in to the podcast Ahead of the Storm and the Storm page here on QuadCities.com!

Sean Leary
Sean Leary is an author, director, artist, musician, producer and entrepreneur who has been writing professionally since debuting at age 11 in the pages of the Comics Buyers Guide. An honors graduate of the University of Southern California masters program, he has written over 50 books including the best-sellers The Arimathean, Every Number is Lucky to Someone and We Are All Characters.
See More Articles From Sean Leary
Tagged: Gwen Tombergslocal charitieslocal hockeyMolineQuad City StormTaxSlayer CenterTristan Tapscott