Circa ‘21’s “Elf” is a cute, fun holiday concoction, and was eaten up and greeted with smiles like Christmas cookies the night I saw it. With a fun live take on the blockbuster holiday film, a fantastic cast, wonderful sets and costumes and a terrific star giving it the perfect tone of goofiness and levity, it’s excellent holiday fare. 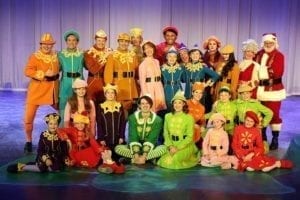 There are flaws to the show, to be sure, but “Elf” is like winter’s first snowflake – you greet it with a smile, it reminds you of Christmas cheer, and you don’t want to put too much thought into it or it’ll ruin the moment. Sure, there are some major plot holes that make no sense, especially if you know anything about the publishing industry. Sure, the music is perfunctory and utilitarian and doesn’t really stand out or have a breakout tune you’ll be humming to the lobby. But honestly, I didn’t really care. I had fun. The people around me had fun. You’ll have fun seeing this show, and I recommend checking it out.

For those who haven’t seen the film (featuring a classic performance by Will Ferrell), it involves an overly large “elf” named Buddy, who finds out that he’s actually a human. Santa tells him where to find his long-lost father, in New York, and he goes off to meet the Dad he’s never met, and who doesn’t know about him. (It turns out that his mother never told the father, and she passed away shortly after the birth, leading to Buddy being adopted by Santa.) Once in New York, Buddy sets about trying to establish a relationship with his father and get his ultimate gift for Christmas – the family he’s never had. 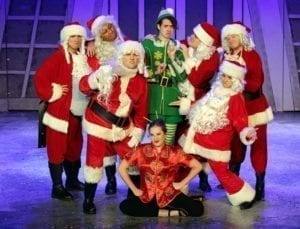 In the meantime, he spreads holiday cheer throughout his interactions with the cynical city folk, finds a love interest, and circles about a “Scrooge”-style story arc with his father. It’s a feel-good show with all the right notes of sentiment, a warm message, and its heart is in the right place. It’s what you want in a holiday show.

But that would merely make it pretty good. A lot of my recommendation has to do with the cast, which does a phenomenal job with the material.

Everything hinges upon finding the right actor to play the part of Buddy. The wrong Buddy and, with this show, you’re boned. It’s not gonna play if he can’t play the right mixture of naïve and charming. It’s a much more difficult part that you’d think, because if you play it too arch it comes off as phony or cloying, and if you play it down too much, the energy of the show suffers. All the more reason to give kudos to Stephen James Potter, who is fantastic in the part. He’s wide-eyed and innocent, goofy and warm, smiley and shiny and plays Buddy perfectly. He’s not anywhere near as winkingly over-the-top as Ferrell, he’s more sincere, and it works very well.

As his plot antithesis, the Scrooge to Buddy’s Tiny Tim, Circa veteran Tom Walljasper likewise is perfect. Walljasper is one of the finest actors around, and it’s always a treat to see him hit such nuanced and smart notes to elevate parts far thinner than his talent. Walter is your standard workaholic grouch Scrooge but Walljasper gives him more depth with his performance, making his transformation more touching, and his relationship with Buddy a wider and richer arc.

The secondary actors each shine as well. Brooke Myers takes a tack-on love interest part as Jovie and gives it a really heartfelt bittersweet nature. Erin Churchill and Julian Anderson, as Walter’s wife and son, likewise take perfunctory roles as disappointed family and give them a nice depth. Janos Horvath is always a pleasure to see on stage, one of my favorite local actors, and as Santa, he’s a joy. And Tristan Tapscott, playing various roles, is also always a lot of fun, and his arch ad-libs and little comedic details are hilarious.

Jeremy Littlejohn likewise deserves credit for directing this talented crew and bringing just the right touch to the material, and costume designer Greg Hiatt and scenic designer Erica Zaffarano are also deserving of praise for their work in building this world.

When you go to a holiday show, you want to have fun. You want to get a warm message of the holidays at their best. You want to get colorful costumes, sets and characters, and some laughs and some love and to just get a warm respite from the winter and hustle and bustle. “Elf” gives you all of that and more. It’s a sweet little show and one for the stocking.

Sean Leary
Sean Leary is an author, director, artist, musician, producer and entrepreneur who has been writing professionally since debuting at age 11 in the pages of the Comics Buyers Guide. An honors graduate of the University of Southern California masters program, he has written over 50 books including the best-sellers The Arimathean, Every Number is Lucky to Someone and We Are All Characters.
See More Articles From Sean Leary
Tagged: Brett HitchcockBrooke MyersCirca '21Denny HitchcockElfErica ZaffaranoErin WalljasperGreg HiattJanos HorvathJeremy LittlejohnJulian Andersonlocal theaterStephen James PotterTom WalljasperTristan TapscottWill Ferrell