Home › Articles › Things To Do › 98 Degrees, On Tour and Heading to the Quad Cities!

98 Degrees, On Tour and Heading to the Quad Cities!

Things are going to heat up in the Quad Cities. Heat up to 98 Degrees, to be specific.

98 Degrees takes the stage at Rhythm City Casino’s (7077 Elmore Ave Davenport) Event Center stage on Saturday May 11 at 8 p.m. Doors open at 7 p.m. and all ages are welcome. 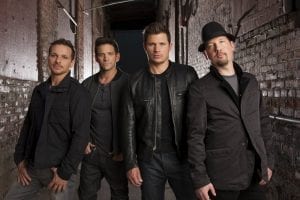 In five short years, from 1997 to 2002, they’d sold a staggering 10 million records, scored a chart-topping single, “Thank God I Found You,” with Mariah Carey and Joe, and collaborated with their collective idol, Stevie Wonder, on “True to Your Heart,” for the 1998 animated Disney film, Mulan. Their four-million-selling album, 98 degrees and Rising (1998, Motown), spawned the top-5 favorites “Because of You,” “I Do,” and “The Hardest Thing,” while 2000s Revelation (Universal Records), which sold two million copies, peaked at number 2 on the Billboard 200 and yielded a trio of hits, “Give Me Just One Night (Una Noche),” “My Everything” and “The Way You Want Me To.”

In 2001, the all-Ohio-raised quartet decided to take a break. Their sold out tours in 2013 and 2016 proved a demand for 98 degrees so when the timing was right with the band’s schedules, they recorded and released their first full-length Christmas album in 18 years, Let It Snow. Last year, the band embarked on a highly successful 31-city tour across the U.S. in support of their Christmas album in addition to their performances on the Macy’s Thanksgiving Day Parade, Disney’s Magic Holiday Celebration, Good Morning America, Today Show, Kelli & Ryan and more.

Over the past 15 years, all four members have enjoyed other careers outside of music. Nick, who was recently on Season 25 of ABC’s Dancing with the Stars, and launched a successful solo music career and has starred on TV shows both as an actor (The WB’s Charmed and One Tree Hill) and as a television host (VH-1’s Big Morning Buzz Live, NBC’s The Sing-Off). Drew was crowned season two winner of Dancing with the Stars, been on Broadway, and both brothers opened Lachey’s Bar. Timmons joined members of Backstreet Boys and ‘NSYNC for VH-1’s Mission Man Band and Nick Carter’s Sci-Fi feature, Dead Seven. Jeffre is involved in various media and cause related projects stemming from his foray into politics as a mayoral candidate of Cincinnati.

Tickets are $65, $55, $45, $40 and $30 plus tax and applicable online/phone ticketing fees (these fees are waived when tickets are purchased at The Market inside Rhythm City Casino Resort).  You can purchase tickets online at https://rhythmcitycasino.showare.com/default.asp.

Tess Abney
Tess Abney was born and raised in the Quad Cities. Her passion for writing and entertainment was apparent at a very young age. Whether it is sharing local events and businesses with readers or sharing her thoughts on life, she finds comfort in the way words can bring people together.
See More Articles From Tess Abney
Tagged: 98 DegreesDavenporteventlive musicQuad CitiesRhythm City CasinoThings To Do