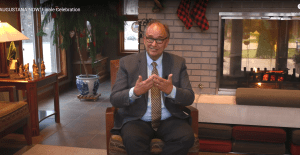 Bahls celebrated exceeding the two-year college campaign in a video.

Originally planning to retire in July 2021, Bahls, 66, delayed his retirement in order to lead the college through the challenging years of the pandemic.

“It has been the highlight of my professional life to serve Augustana College, and I look forward to my next great adventure,” he said in a Monday announcement.

The eighth president of the college, Bahls started his tenure at Augustana in the summer of 2003. Previously, he was dean at Capital University Law School (Columbus, Ohio), the only law school in the nation affiliated with the Evangelical Lutheran Church in America, and served as associate dean and professor at the University of Montana School of Law.

Since 2003, the Augustana community has benefited from his passion for the liberal arts, his natural gifts as an explorer and collaborator, and his drive for innovation.

“Steve’s leadership has driven Augustana to new heights, and he’s done that with a steadfast commitment to growth, to innovative programming, to diversity and to the long-term financial strength of the college,” said John Murabito, alumnus and chair of Augustana’s 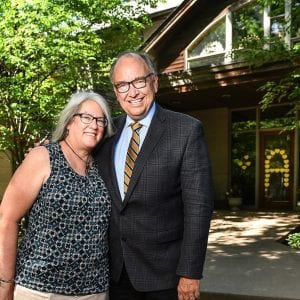 Steve Bahls and his wife Jane have three children and five grandchildren.

“At the end of the day, Steve is all about the students and their experience at Augustana, preparing them to be outstanding global citizens and contributors to society,” he added. “Steve’s impact is far reaching, starting with the 2,400 students on campus right now. And then add all of those who have graduated since he’s been at Augie, and one gets an idea of the impact Steve has had on the countless students whom have benefited from his accomplishments.”

Bahls’s eye for growth and creativity can be seen throughout the physical campus, with upgrades totaling over $114 million, including:

During his tenure, Bahls is said to have a “growth mindset,” and his commitment to Augustana being the best it can be is evident on campus, the college release said.

Augustana’s enrollment has grown by almost 10 percent, and the faculty has grown by more than 13 percent since he started in 2003. Augie has added 16 new academic programs and seven varsity athletics programs, and seen significant growth in study abroad, in part because of 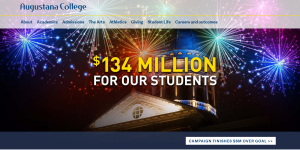 Augie Choice, a $2,000 grant to every student for study abroad, research or internships, which was launched in 2010.

Among his proudest accomplishments has been achieving goals around diversity, equity and inclusion. About a third of Augustana students are either U.S.-born people of color or international students, representing the most diverse student body in the college’s history.

“Our mission promises students will be prepared to succeed in ‘a diverse and changing world.’ So we’ve focused on evolving and ensuring Augustana represents the diversity of the world, and that all students graduate with a similar sense of belonging and the skills to excel in their career,” Bahls said.

He has been a dedicated Quad Citizen as well, serving as board chair of the Genesis Health Systems and the Quad Cities Chamber Foundation.

He previously chaired the boards of the Quad Cities Cultural Trust, Putnam Museum, the Illinois Quad City Chamber of Commerce and the Illowa Council of the Boy Scouts of America and also serves on the board of the Quad City Symphony. He was one of the three original tri-chairs of Q2030, the Quad-Cities’ regional action plan.

Bahls’s reach expanded beyond the Q-C, chairing the boards of the Federation of Illinois Independent Colleges and Universities, the CCIW

A Des Moines native, Bahls has been Augie president since 2003.

Council of Presidents, the Lutheran Education Conference of North America, and the ELCA Council of Colleges and University Presidents.

The search committee will include seven trustees, three faculty members, two administrators and one student representative, and they will work together to make sure updates are shared every four to six weeks with the campus community and on the website.

The long-range goal will be to announce the next president of the college by the end of 2021 and welcome them to campus to begin their role in mid-2022.

President Bahls’ advice for his successor? Enjoy the journey.

“It is a journey. It’s not a sprint… Savor those special moments with students,” he said. “Savor the opportunity to welcome eager new students at opening convocation. Savor the wonderful feeling of seeing students grow during their time at Augustana College and handing them their diploma.”

“I think Augustana’s best days are ahead: as we become a college that is truly open to all, notwithstanding economic circumstances, and as we do a greater job of modeling for our students diversity, equity and inclusion, commitment to the environment and commitment to the community,” Bahls said.

Bahls was born in Des Moines in 1954. He and his wife, Jane, were married in 1977. Jane Easter Bahls is a graduate of Cornell College and Trinity Evangelical Divinity School. She had a 22-year career as a freelance writer after eight years as a college religion and philosophy

instructor. Jane is active in the life of Augustana and in the community, including Operation Read, Churches United, Ballet Quad Cities and Family Resources.

Steve and Jane have three children — Daniel, a Williams College and Boston University Law School graduate, is a lawyer in Massachusetts; Timothy, a graduate of Middlebury College and the University of Wisconsin-Madison Graduate School, is a computer scientist in Wisconsin; and Angela, an Augustana alumna, is a graduate of the speech language pathology program at the University of Arizona, and is now practicing in Indiana. Steve and Jane also are the proud grandparents of five grandchildren.

In a Q & A on the Augustana website, Bahls says the most immediate goal for the college is “to continue to live responsibly with COVID, to keep our students as safe as we can, whereas at the same time provide them with a high-quality face-to-face education. Not many schools have been able to do what we’ve been able to do — hold most of our classes live — and it’s because of the extraordinary commitment of our students, in particular, to be safe.

“Now, the damage that COVID has done to our finances is very repairable. We need to continue to enroll good-sized classes,” Bahls said. “We need to continue to ask our friends to support us as we make Augustana accessible to our students, and we need to continue with our efforts for new program development: bring that Lindberg Center online, bring men’s and women’s water polo online, build up our kinesiology major and prepare to offer an engineering major.”

On New Year’s Eve, Augustana celebrated exceeding its ambitious “AUGUSTANA NOW” campaign, raising a total of $133,662,743, $8 million beyond its goal.

Steve Bahls and his wife Jane.

“We set an audacious goal, and it took the hard work and shared vision of literally thousands of people to surpass that goal by millions of dollars,” said Kent Barnds, executive vice president for external relations and the leader for philanthropy at Augustana.

The public phase of the campaign launched in October 2018. The campaign had four main student-centered objectives: affordability, preparation, innovation, and diversity, equity and inclusion.

This fundraising campaign was the second completed by President Bahls during his 18 years at the college.

“Steve Bahls has cemented himself in the history of the college as the leader to raise the most money to benefit Augustana students,”  said Barnds.

Included on the list of many programs, initiatives and innovations, the campaign funds are being used for are:

Jonathan Turner
Jonathan Turner has been covering the Quad-Cities arts scene for 25 years, first as a reporter with the Dispatch and Rock Island Argus, and then as a reporter with the Quad City Times. Jonathan is also an accomplished actor and musician who has been seen frequently on local theater stages, including the Bucktown Revue and Black Box Theatre.
See More Articles From Jonathan Turner
Tagged: Augustana Collegeaustin e. knowlton outdoor athletic complexevald-carlsson hallgerber center for student lifeold mainparkander residence centerquadcities collegessteve bahlssteve bahls retirementswanson commonsthorson-lucken field