The Spotlight cast of “You’re a Good Man, Charlie Brown” at the close of the show.

Simple, sweet, nostalgic – both exuberantly childlike and loaded with the weight of the world on its young shoulders – the beloved 1967 musical based on the classic “Peanuts” characters has deeply resonated with me my whole life.

First, I’m sure like many socially awkward boys, I always closely identified with the title “Everyman” role. Charlie Brown is the cartoon reflection of “Mister Cellophane” (from “Chicago”) – people look right through him and hardly notice him at all. He’s earnest, innocent, optimistic, and wants to do good and find love – but is plagued by self-doubt, lack of confidence, and frantic worry about what others think about him.

As a pianist since a small child, I also tightly relate to the tightly-wound, similarly tortured Schroeder, who worships Beethoven and is 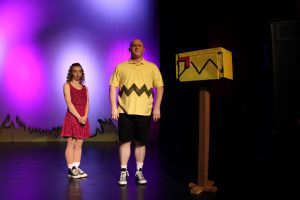 plagued by the clingy worship of the unpleasant, bullying Lucy. I played Schroeder in a weak grade-school version of “You’re a Good Man,” and got to be Charlie Brown in a high-school-era version of “The Baseball Game” from the show.

So, lots of memories coming in Friday night to the stunning, soaring space of Moline’s Spotlight (1800 7th Ave.), to see my first production there in a LONG time, with about 75 other patrons. Co-owner Sara Tubbs perfectly articulated my enthusiasm for live theater in her pre-show introduction.

“We are just thrilled we are open, have a live audience, and are doing a musical again!” she exclaimed, on the first night Illinois allowed performance venues to open with no limits on audience capacity. (And I got to enjoy Spotlight’s classy new Blueprint bar!!)

Just as thrilling and lovely was the fact that “Charlie Brown” (which opened June 4, and has just two performances remaining) boasts a live five-piece band (off-stage), headed by the super-talented pianist and music director Mason Moss.

Open since fall 2018 (when current CB performers Ian Sodawasser and Adam Sanders starred in “Hunchback of Notre Dame”), the Spotlight has seemingly captured that sweet spot of family-friendly programming, on top of their many educational and children’s offerings.

“Charlie Brown” — revived on Broadway in 1999 and done in 2017 at Moline’s Black Box Theatre — is naturally based on the long-running comic strip, but its young characters often speak with insight and maturity far beyond their years, and have an immediate, profound connection with audiences of all ages. 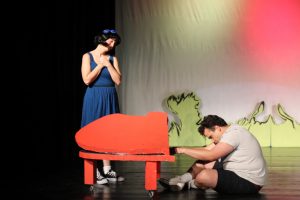 Charlie, Linus and Schroeder in particular present as pint-sized sages, alternating between dreams of their idealistic youth and grizzled, weary veterans of a harsh, unforgiving world.

Though the characters are frozen in time (like Bart Simpson, always the same age), Charlie Brown especially seems like he’d be a candidate for adult psychotherapy and antidepressants.

Of course, there’s a famous scene in Act One (“The Doctor is In”), where he consults “Dr. Lucy” for psychiatric help and she is far from supportive (fortunately, her 5-cent fee is FAR below what any doctor would charge). From the start of the show, Charlie Brown is the target of thoughtless criticisms of his character – even from his sister Sally, who derides his inferiority, stupidity and low self-esteem.

The opening title song mirrors what can often be the love-hate relationship of childhood friends (or any relationship) – others tear him down, but try to build him up at the same time.

Before there were the unseen wives of Norm on “Cheers” and Niles on “Frasier,” “Peanuts” introduced us to the never-seen red-haired girl who’s the object of Charlie Brown’s unrequited affection. 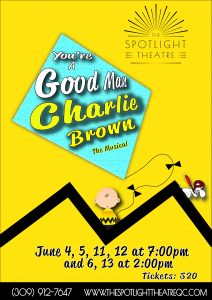 As wonderfully played here by Noah Hill, he’s many times alone debating with himself – is this the worst time of day? What would the red-haired girl do if I talked to her? Does she ever think of me?

Spotlight co-owner Brent Tubbs — the skilled and committed director of the current production – has cleverly added an ensemble of seven actors to the core of six primary characters, including a red-haired girl I at first thought was THAT one. But Hill gazes ahead when he talks about her, not in the direction of who is Frieda – a real “Peanuts” girl with red hair, played by Bella Kuta.

In part to conform to not changing the show dialogue, the ensemble characters are unfortunately mute speaking-wise, though they delightfully add their voices and dances to group musical numbers.

A particular highlight in this way is the first-act “My Blanket and Me,” which highlights Linus’ drug of choice. Even for the smartest and most even-tempered kid in the gang of nuts, Linus needs something to lean on and Mayfield is a dream as he stylishly dances with his blanket.

Winter as Marcie joins in the fun, as it turns into a very cute group number (everyone gets a blanket), and Becca Johnson’s beautiful choreography (truly throughout!) ends the piece with Mayfield sweetly pulling Winter off stage, riding on the blanket.

A similar sense of security and comfort comes in Sodawasser’s first warm song, “Snoopy,” relating the spoiled, lush life of man’s best friend. Sodawasser nails the classic character’s boundless sense of adventure and fun, especially in his showstopper, “Suppertime” in Act Two, where despite his master’s warning, Snoopy has to make meal time a big production number. It’s absolutely glorious, ending with super-high note Sodawasser fittingly hits up on top of the dog house.

Hill also gets his moment up in the clouds in his triumphant, “The Kite,” as Charlie perennially wrestles with freeing his kite (like him, decked out in yellow and black). When Hill realizes it’s finally flying, he strongly soars in the song along with the kite. 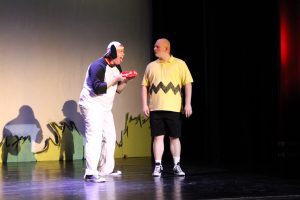 The extra cast gives an extra boost and jolt of energy in the charged “Beethoven Day,” where Sanders shows off his impressively big voice, and the whole number reveals tremendous energy.

He and his real-life wife, Bethany, sparkle in the sunny, funny “My New Philosophy,” where the snarky, caustic Sally tries out random phrases as her go-to comeback lines – like “Oh yeah?”, 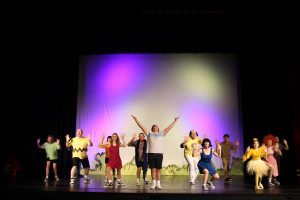 “That’s what you think!” and “Why are you telling me?” I could also really identify with Bethany when she gets mad at literally everything, even though she’s just mad at her jump rope.

Fischer is similarly perfect as the tough-as-nails Lucy, the temperamental opposite of her peaceful, cheerful brother Linus. One of the best bits for Fischer is after Sanders erupts at her in a fight, pleading for her to take Socrates’ advice, and know herself better – she takes her huge pencil and pesters friends to respond to a survey about her crabbiness and general character.

Echoing the hopeful mood of current society – finally emerging from this dreadful, never-ending pandemic, the show closer “Happiness” is a wistful, gentle, gorgeous expression of our dreams and desires.

And the Spotlight cleanly, affectionately, expertly delivers what we most all need after these grueling past 15 months – happiness.