Big River Will Take You On An Enjoyable Journey

Take a trip down the Mighty Mississippi with the newest production from the Mississippi Bend Players!

To purchase tickets for any of the remaining performances, visit https://www.mississippibendplayers.com/. Hurry, because seats are going fast! 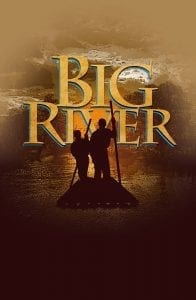 Big River’s characters, plot and themes are based on Mark Twain’s beloved novel Adventures of Huckleberry Finn. It proves to be the perfect underscoring for the story of Huckleberry Finn (Quinn Rigg), a poor boy who discovered a large sum of money with his best friend, Tom Sawyer (Jaryd Whitmore). While it earns interest in the bank, his adoptive mothers, Miss Watson (Kayla Lansing) and the Widow Douglas (Kelly Hill) attempt to “civilize” him, teaching him to read, bathe, and fear God. Huck finds it all stifling, but he feels equally oppressed when his drunkard father (George Schulz) comes around to claim him (and his money). Huck fakes his own death and runs away to Jackson’s Island, where he finds Jim (LaRon Grant), a slave owned by Miss Watson who has also escaped. Together, they plan to float a raft down the Mississippi River until it meets the Ohio at Cairo, then catch a steamboat north until Jim lands in the free states.

The musical score for Big River is what pulls the entire performance together, however. Saul Nache, a teacher at Illinois Wesleyan University, Augustana College and Bradley University (whose most recent endeavor was an outstanding performance in the role of Figaro with Opera Quad Cities), has taken on the task of Musical Director for Big River.

Saul shares, “BIG RIVER’S score is by the American singer-songwriter, Roger Miller, perhaps best known for his big hit, “King of the Road”. To write music to the story of The Adventures of Huckleberry Finn, Miller wrote music inspired by the musical genres of country, bluegrass, blues, and gospel. The music is what captivates the audience at every performance! Miller was able to write songs for each character in the style that most fits their personalities.”

In the words of Quad Cities’ own theatre legend, Saul Nache, “Come on out to see this 7-time Tony Winner MASTERPIECE!”